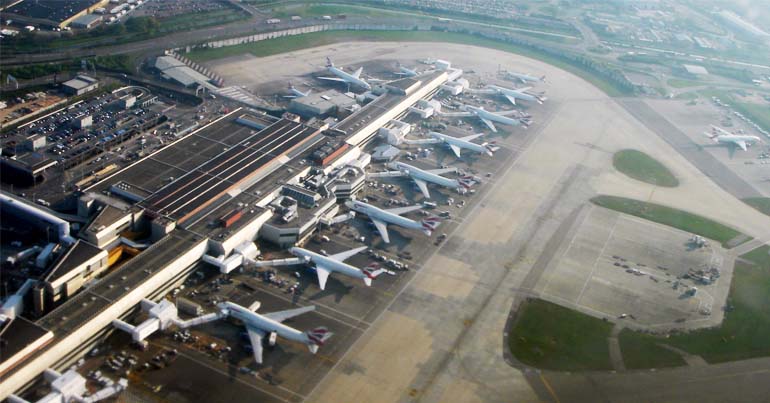 Heathrow airport has released consultation plans for its new runway. It revealed the expansion will require major infrastructure work including re-routing the M25 and displacing waterways in the Colne Valley. In doing so, it revealed just how far capitalism is willing to go to bring the entire planet to the brink of death.

Heathrow published its “preferred masterplan” for building a third runway on 18 June. The plans, which were made available for a 12-week public consultation, showed the scale of work required. They included:

The plans included measures intended to reduce its environmental impact. These included a “green loop” of footpaths, cycleways and wildlife reserves. The airport will also introduce an “ultra low-emissions zone” for road users.

But the airport appeared to make misleading claims about its ecological impact. For example, Simon Evans, deputy editor of climate news website Carbon Brief, highlighted its carbon emissions claims. The website said CO2 emissions from the expanded airport would be “equivalent to 1.2% of the UK 2050 carbon target”. But Evans pointed out that this figure doesn’t account for international flights. Furthermore, it’s based on now out-of-date climate targets.

It will also affect human communities. The Guardian, for example, highlighted one way that the airport will seriously affect mental health. It said that Friends of Richmond Park outlined serious concerns about the effect of noise pollution of up to 90 extra flights per hour would have on people below the flight path.

Emma Gilthorpe, Heathrow’s executive director of expansion, said that the new runway “must not come at any cost”. But this is the opposite of what the plans lay out.

A third runway will cut deep into the heart of communities in the area. Moreover, its construction and operation will cut deeper into the health of the planet. With barely more than a decade left to avoid climate breakdown, and with the aviation industry one of the worst polluters around, there’s only one possible cost for this expansion: nature itself.

By its own admission, Heathrow’s priorities are trade and economy. The introduction to its consultation only mentions trade, business and destination links as reasons behind the plans. Communities, biodiversity and the climate are just obstacles that need a solution.

Capitalism isn’t interested in you or me. It just makes even more money for the already-wealthy. Meanwhile, the political establishment does almost nothing to rein it in.

Capitalism and the State

Much has been made of Boris Johnson’s flip-flopping position on the project. However, Labour’s been equally ineffective. In June 2018, leader Jeremy Corbyn allowed party MPs to vote freely on Heathrow extension plans and 119 voted in favour, thereby helping the expansion to go ahead. And on the day the consultation was published, Labour peer Andrew Adonis tweeted in support of the project.

And it’s not the first time cross-party collaboration has approved ecologically destructive projects. In March, for example, Labour, Lib Dem and Conservative councillors in Cumbria approved a deep-sea coal mine on the basis that it would bring investment. And MPs from all main parties back the high-speed rail link, HS2.

Direct action alliance Green Anticapitalist Front explained to The Canary just what Heathrow’s expansion really means for most of the public:

The UK government’s declaration of an environmental emergency at the same time as pushing forward with the expansion of Heathrow makes it patently clear how connected the climate and class struggles really are. They simultaneously feed us empty promises to placate what is, at its core, a revolutionary demand, while also continuing the business of making life increasingly difficult for those of us who won’t be able to afford the costs of environmental destruction, which will inevitably be heaped onto our shoulders.

Expanding Heathrow is a necessary move to keep the crisis-prone capitalist system chugging along on its last legs. But stopping the Heathrow expansion is essential for us as a turning point in the fight against disaster capitalism.

Capitalism will destroy the entire planet as long as it can make money from doing so. Heathrow reminds us of this. And the political establishment has shown little willingness to take the impact of capitalism on the Earth seriously. So we must take whatever action we can, now, for ourselves, our communities and for the things we love.