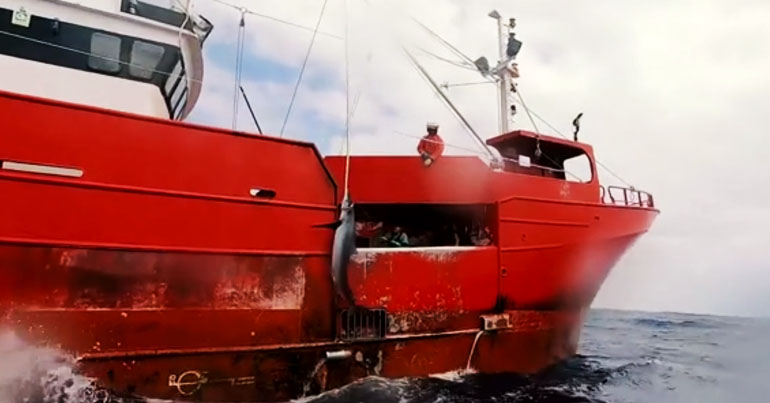 Greenpeace has published “shocking footage” of a fishing boat killing sharks in the North Atlantic. It captured the incident during an 11-month journey by the ship Esperanza to expose “threats currently facing the world’s oceans”. And it’s demanding laws to protect wildlife in international waters.

On 26 June, the Esperanza was 200 miles from the Azores, in the North Atlantic, when it came across a fishing vessel “hauling in sharks on a longline”. In this type of fishing, baited hooks are attached to nets and left submerged in the sea. Greenpeace’s video shows fishermen landing at least four different sharks, struggling as they’re hauled onboard. The group said that, in addition to filming, it unfurled a banner reading “Sharks Under Attack”.

This is far from an isolated incident. Greenpeace used the 26 June incident to highlight the message of a new report, Sharks Under Attack, which reveals the impact that commercial fishing is having on sharks.

The North Atlantic is a swordfish fishery, meaning fishing vessels can catch swordfish while keeping a sustainable population. But Sharks Under Attack says that the “primary catch is in fact sharks”. Fishermen will haul in sharks both intentionally and accidentally, and do so at an estimated rate of 4:1 by weight when compared with swordfish.

Commercial fishing targets three shark species in the North Atlantic: blue, shortfin mako, and porbeagle. Greenpeace says the industry threatens both blue and shortfin mako species. The International Union for Conservation of Nature (IUCN) recently listed the shortfin mako shark as an endangered species, and Greenpeace said the most recent catch data showed amounts that will “further deplete the population”. IUCN also proposed to have the shark entered into the Convention on International Trade in Endangered Species of Wild Fauna and Flora (CITES).

As a result, the charity is demanding a Global Ocean Treaty, which would link up the patchwork of international regulations on fishing and marine conservation. This would take a “more holistic approach” to threats on biodiversity and give “comprehensive protection” to marine life. This treaty would:

Greenpeace believes a Global Ocean Treaty could “pave the way to protecting at least 30% of the world’s oceans by 2030”.

Footage captured by the Esperanza on 26 June shows the reality of shark fishing. Fishermen will cut the fins off still-living sharks and throw the body back into the sea, where the shark dies because it’s unable to swim. The fins end up in ‘delicacies’ such as shark fin soup, which is popular in some eastern Asian countries. As Greenpeace points out, while the public often thinks of Asian fishing fleets as the main perpetrators, Spain is the world’s third highest producer of unprocessed fins. This is despite the country having banned the practice in its waters, as all EU nations have.

Biodiversity everywhere is under threat. And we must do whatever we can to ensure that all wildlife is given the opportunity to thrive.