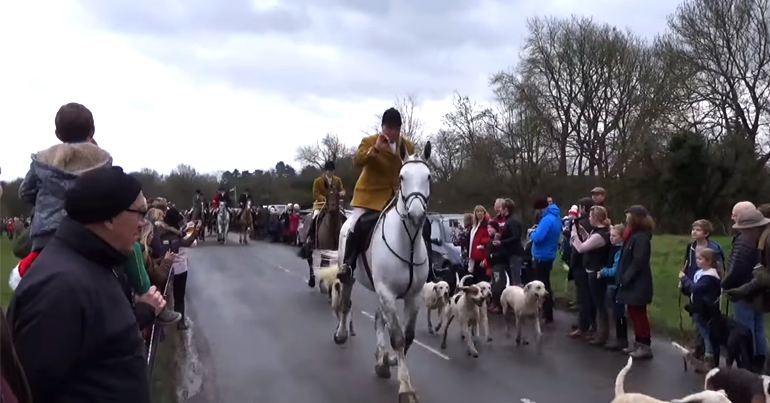 The judge during the case described the pair’s actions as “deliberate and pre-meditated” and convicted them of unnecessary cruelty to a fox. She also told the pair to expect custodial sentences.

Since then, things have gone from bad to worse for this hunt.

Within days of the judgement, the Kimblewick Hunt faced further repercussions. On 5 November, Oxford Mail said that Thame Town Council had “voted to refuse permission” for the hunt to meet in the town centre on New Year’s Day. This location has been the ‘traditional’ pre-hunt meet for New Year’s Day “in recent years”.

The Kimblewick Hunt set out from Thame on the same day that the Covert Film Unit caught Vincent and Parkinson. The council actually decided to refuse permission before the conviction. Minutes from the 29 October meeting show that, although the hunt had not approached the council to hold the meeting in the town centre, the:

default position [is] that permission will not be given this year.

However, a spokesperson for the hunt told Oxford Mail that it still “looks forward to welcoming huge crowds over the festive period”.

That’s not the end of the hunt’s woes, though. Several days later, it emerged that Forestry England (FE) was also reconsidering its position on the Kimblewick Hunt. The government body is responsible for forests across England, and licenses hunts to use its land. It initially licensed six dates for the Kimblewick Hunt, which are still listed on FE’s website at the time of writing:

However, FE said on 8 November that it had cancelled the Kimblewick Hunt’s next date on the commission’s land. In an email also sent to The Canary, FE said that it’s “taking time to consider the issues raised by the recent convictions at Oxford Magistrates Court”.

Anti-hunting campaign group Stop Hunting on the Nation’s Land described the news as “positive”, and said it expects FE to ‘fully ban’ the Kimblewick Hunt “soon”.

Commenting on the Kimblewick Hunt’s conviction, pro-hunting lobby group the Countryside Alliance told BBC News that there’s “no justification for this type of activity”. It also said that:

Companies House shows that director of the Countryside Alliance Guy Portwin was a director of the Kimblewick Hunt between 2008 and 2012. Horse & Hound‘s hunting directory for the 2012/13 season also lists Portwin as a joint-master of the hunt:

Furthermore, his wife Polly Portwin is also the Countryside Alliance’s head of hunting.

The Kimblewick Hunt hit mainstream news in March 2017 after it killed its hounds following an outbreak of bovine TB (bTB). The hunt at first claimed that “about 25 hounds” had been killed in December 2016. But a research paper published on 31 July 2018 revealed that the hunt had actually killed 97 hounds. It also revealed that one human at the Kimblewick Hunt’s kennels had contracted bTB.

It’s clear this hunt is involved with reckless, criminal and immoral activities. Both Thame Town Council and Forestry England recognise this. It’s time that other landowners and the hunt itself recognise this. The Kimblewick Hunt must end its widespread animal cruelty immediately.