One video shows the violence that anti-hunting activists face - Canary 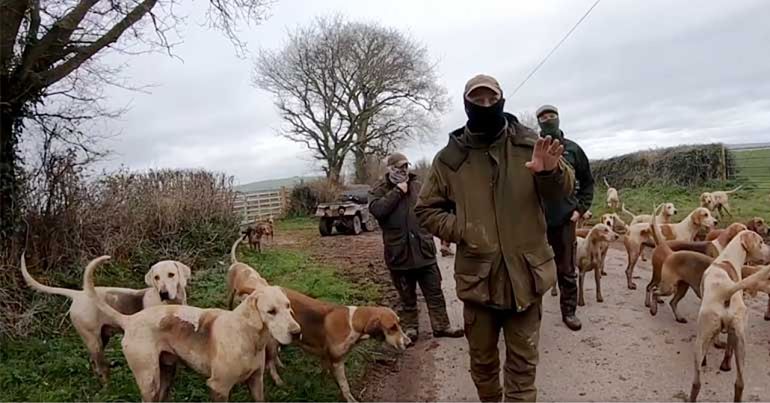 A video by Devon County Hunt Sabs (DCHS) reveals the violence that anti-hunting activists face. The sab group published footage that it says shows several men attacking and robbing a hunt saboteur. And it says the police aren’t taking the incident seriously.

“Thugs piled on top of him”

DCHS attended a meet of the Silverton Hunt in Upton Pyne, outside of Exeter, on 14 March. Its report on the day said that sometime during the afternoon, terriermen with the hunt “broke the passenger side window” of the group’s Land Rover. And soon after, the same group allegedly attacked two hunt saboteurs. The DCHS report said:

One sab was kneed hard in the groin and the thugs piled on top of him throwing punches and trying to steal his body camera. The other sab was also attacked and was robbed of his possessions. His hunting horn was snapped in half and his phone and radio were taken.

The video, which includes footage from multiple angles, shows a group of men pushing a sab to the ground before kicking and grappling with him. When a second sab tries to intervene, he is also tackled to the ground and assaulted. The footage also appears to show two men grabbing items from the ground, which DCHS claim are a radio and phone. Several hunt followers are also seen in the video. However, none of them intervene. In fact, several turn their backs and walk away.

The Canary asked DCHS what impact the attack had on the two sabs. It said:

This is just one example of the violence we face from the hunts on a weekly basis as we expose trail hunting in Devon for what it is – a myth.

The police are aware of this incident and others like it and we are still waiting for arrests to be made. If anyone can help identify these masked attackers we urge you to contact Devon and Cornwall Police.

Our sabs have sought medical attention for their injuries which we hope will not be long term.

It also wanted to address the fact that, like the terriermen, both its members were wearing masks:

We have come to expect violence every time we go out. This is why many sabs wear masks for personal safety as hunt followers and staff are known to harass protesters at home and work. We also wear body cams to film the whole day, for evidence of hunting crimes and for additional safety. We have nothing to hide.

The Canary previously covered the reasons that many sabs choose to ‘mask up’.

The Canary also contacted the Silverton Hunt about the incident and DCHS’s allegations. A spokesperson for the hunt said:

The Silverton Hunt does not condone any form of violence, even in the face of extreme provocation, personal harassment, malicious trespass and other offences that hunts are regularly subjected to by animal rights activists. The hunt acts lawfully within the confines of the Hunting Act 2004 and takes every measure to ensure the law is adhered to.

“We understand this matter may be subject to a police investigation so we are unable to comment further.

Local news website DevonLive confirmed on 19 March that Devon and Cornwall Police are investigating the incidents. However, DCHS criticised the force’s response in another post on Facebook.

DevonLive quotes sergeant Richard Stonecliffe, who focuses on DCHS’s footage. He said that police “can’t rely on edited footage” posted to social media and that making it public could ‘jeopardise’ an investigation. Stonecliffe also said that “sometimes… witnesses are unwilling to share footage or give statements”, making investigations impossible.

But DCHS hit back at Stonecliffe’s comments. The sab group said it “made arrangements for burning the footage to a disk and handing it in at the police station once a crime reference number had been generated“. However, the officers at the scene provided an incomplete reference number, making submission impossible. The post also clarified that it always submits unedited footage to the police. And it ended by saying that past inaction or mistakes by Devon and Cornwall Police led the sab group to publish the video itself.

The Canary contacted Devon and Cornwall Police about DCHS’s latest post. However, it wouldn’t comment any further and linked back to a press release published on 19 March that includes the Stonecliffe response published by DevonLive.

Sergeant Stonecliffe’s response echoes a press release by Cheshire Police in January 2019. This seemed to accuse local hunt sabs of not submitting footage properly, which allowed pro-hunt media to claim sabs were putting out fake news. And while the Devon and Cornwall Police press release leads with details of the suspects, it also spends half its word count apparently blaming victims of the attack.

DCHS’s video is another example of the shocking violence that sabs regularly face across the country. Furthermore, it also shows that sabs can face an uphill struggle to have their problems taken seriously by the police even when there appears to be clear evidence of assaults. But fortunately, this hasn’t put DCHS off from protecting wildlife across Devon.