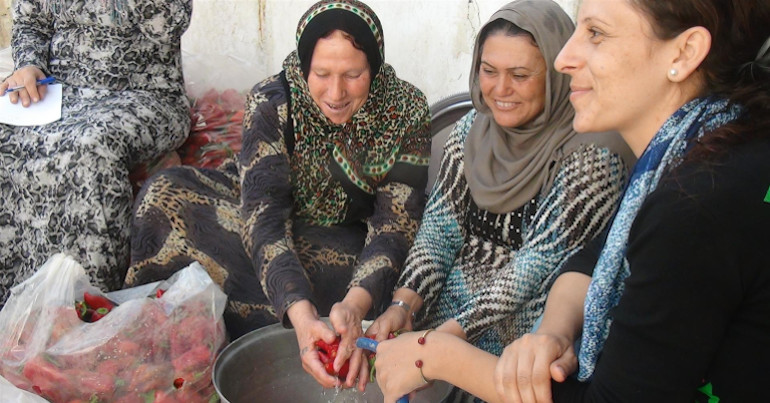 An international campaign aims to support efforts to repair the damage Turkish attacks have inflicted on Rojava’s water supply.

The Water for Rojava campaign has already raised over £30,000 in donations. Every donation is matchfunded so the total amount raised is over £60,000.

Since 2012, a revolution has been taking place in Rojava.

Rojava is the area of Kurdistan which lies within the borders of Syria. The revolution in Rojava is based on the values of women’s freedom, direct democracy, and creating a collective ecological society.

According to Dilar Dirik, a Kurdish researcher, womens’ movement activist and supporter of the Water for Rojava campaign:

In the region of Northeast Syria, also known by its Kurdish name ‘Rojava’, a democratic self administration system has been built up since 2012.

What has been created in Rojava is a society, a system, based on a grassroots democratic, ecological, and women’s liberationist paradigm in which all the different ethnic and religious communities can live together on their own terms, through autonomy, self determination and equality.

The revolution is under threat

Ercan Ayboga of the Save the Tigris campaign explained the need for the Water for Rojava campaign in a video made to support the funding appeal:

Nowadays the revolution of Rojava is under a big threat. It is not only by war. Also other challenges are important, for example the water.

In 2015, Turkey started to use water as a weapon against Rojava. It started to cut the water on the rivers which flow from Turkey To Rojava through the dams it has built in the last decades.

Turkish president Recep Tayyip Erdoğan sees the progressive revolution in Rojava as a threat to his own authoritarian rule across the border in Turkey. Rojava’s revolutionaries share a vision with those fighting for autonomy and direct democracy inside Turkey.

Turkey invaded and occupied Northeast Syria in October 2019 with the help of jihadist proxy forces. The Turkish led forces were intent on ethnic cleansing, and were accused of war crimes and using chemical weapons. Over 300,000 people were forcibly displaced.

According to Ayboga, the town of Serikaniye, where Turkey mounted its invasion, contains key water infrastructure for the surrounding Hasakeh region:

The situation became very difficult last year when, in October, Turkey invaded some areas of Rojava.

In the region of Serikaniye are a lot of water sources which are used for almost half a million people in the region around Hasakeh.

The Water for Rojava campaign points out:

The Alouk water station in Serekaniye was targeted on the first day of the [Turkish] invasion. Since then it has been fixed and then put out of service again repeatedly.

Since the start of the invasion of Serekaniye, Turkish military forces and their allies have continued to attack water infrastructure, burned newly planted orchards and dammed the rivers providing most of the fresh water and electricity to Syria. Hundreds of thousands of people are currently without safe reliable drinking water.

Turkey’s attacks on water infrastructure in Northeast Syria mean that people have less access to clean drinking water. According to Rojava Information Center (RIC), this increases the risk of coronavirus (Covid-19) spreading in the region. RIC’s Thomas McClure said in April:

Turkey needs to immediately cease cutting off the water flow from Alouk water station and leaving up to a million people without access to clean drinking water, as this constitutes a war crime and will severely worsen the impact of Coronavirus in the affected region.

Water for Rojava is hoping to raise £100,000 for water projects in Rojava that support its democratic cooperative economy and help to repair the harm done by Turkey’s invasion.

For example, some of the money raised will go towards Aborîya Jin’s women’s cooperative village. Aborîya Jin means ‘women’s economy’. According to Water for Rojava the money will support:

Aborîya Jin’s ecological women’s village project in Dêrik – a village based on the communal economy, run by women (predominantly economically-disadvantaged women, who have experience in agriculture). The main challenge is to find enough water to support agriculture.

A statement received by the Canary from Heval Armanc of Aborîya Jin points out:

Most of the water sources in the region were in Serekaniye and we lost them with the invasion. We have been struggling a lot more since we lost access to the water resources. We have some women’s economy projects, like our project in Dêrik… where we are digging wells, planting trees and building houses.

With all that we do, we are mindful about nature and not to cause any harm.

Armanc points out the importance of international support for Aborîya Jin’s projects:

If we are working alone [our] projects will move very slowly. That’s why the Water for Rojava campaign is very important.

Access to water is even more important with the global pandemic, you need water to be clean and safe.

Funds from the campaign will also be used to restore the Al Hemmeh water station near Hasakeh, refill its reservoir, and to improve sewage systems, desalinisation infrastructure, and drinking water supplies in the region.

The Water for Rojava campaign is a key way that people internationally can support the Rojava revolution, and the creation of a cooperative economy that is controlled by people at a grassroots level, with ecology at its centre. This revolution is threatened by the Turkish state’s invasion and occupation. It will need international solidarity in order to survive.