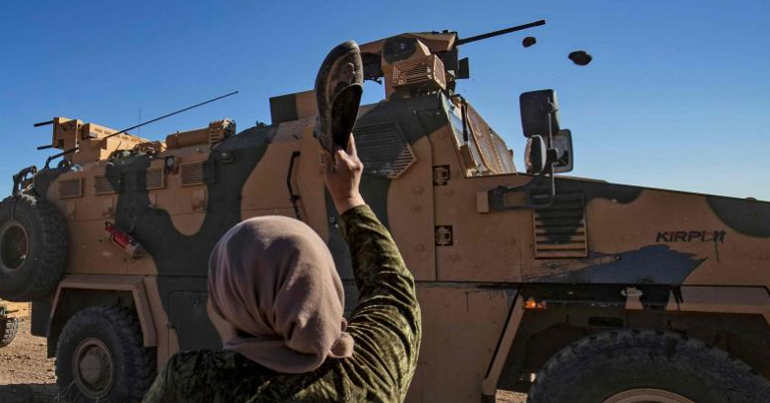 The people of northeast Syria [aka Rojava] are fiercely resisting against the patrols by Turkish and Russian occupation forces.

They’re facing the guns and armoured vehicles of two of the world’s strongest militaries. Here in the UK we can stand in solidarity by demanding the UK stops its arms exports to Turkey.

This video from Monday 18 November shows women and men throwing molotov cocktails at military vehicles as they tried to patrol through the towns of Kobanê and Dirbêsiyê:

Against the occupation and patrols of the Russian-Turkish imperialist alliance the resistance of the people of NE #Syria is growing stronger!

Today the local population attacked the occupiers in #Kobanê and #Dirbêsiyê with stones and Molotov cocktails.#riseup4rojava pic.twitter.com/Sh0TGcoPPh

Another photo (at the top of this article) appears to show a woman preparing to throw her shoe at the patrol.

Turkish-led forces invaded Rojava on 9 October. On 22 October, Turkey and Russia reached an agreement to jointly patrol a 30km area along the northeast Syrian border. The local Syrian Democratic Forces (SDF) were left with little option but to withdraw. However, civilians are mounting a strong resistance to the patrols by the occupying forces.

Another tweet from Riseup4Rojava documents the injuries caused to the protesters:

Today the occupying forces drove two civilians over, ran over a woman's leg and fired tear gas at the people.

On 8 November Serxwebûn Ali died after being run over by a Turkish vehicle on patrol. Five other people were injured. On 12 November, the Turkish military opened fire with live ammunition on protesters in Kobanê.

An occupation aiming to crush a revolution

In 2012, a revolution began in the majority-Kurdish region of Rojava in northeast Syria. People organised themselves into communes, declared autonomy, and began practising stateless direct democracy. The revolution, however, was under threat from the very beginning, and has faced continuing attacks and invasions by Daesh (Isis/Isil) and Turkey.

[Turkish leader Recep Tayyip] Erdoğan sees the revolution in Rojava as a threat to his own autocratic rule because it acts as a beacon of hope for those who want to create radical peoples’ democracy in Turkey.

The UK is still exporting weapons to Turkey, despite the mounting evidence of war crimes by Turkey and its jihadist proxy forces. The Canary previously reported:

On Tuesday 15 October, the British government suspended new arms sales to Turkey over its invasion of northern Syria.

Foreign secretary Dominic Raab announced that no more export licences would be granted “for items that might be used in military operations in Syria” until a review takes place.

But Raab’s announcement made no mention of the UK-based companies who have already been approved licences. These existing licences mean that UK-based companies can continue exporting military equipment for use by Turkey in its invasion.

The military vehicles pictured above are Kirpi vehicles, manufactured by Turkish company BMC. Ethem Sancak, chair of BMC, is a crony of Turkish president Erdoğan.

BMC has been one of the many companies invited to the UK government sponsored DSEI arms fair, held in London every two years.

We need to take action

We need to take action to force the British government to suspend all existing arms export licences to Turkey. We also need to listen to the calls from the people of northeast Syria, who are demanding a boycott of Turkey and a no-fly zone to stop Turkey’s aggression.