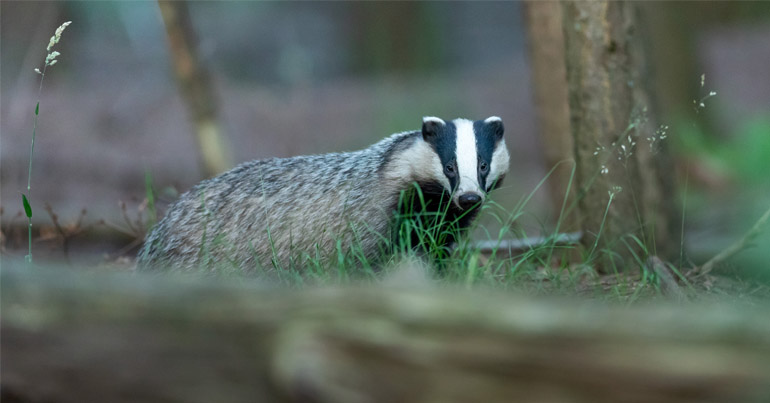 An activist has published footage of hunting hounds clawing at what she claims is an ‘active badger sett’. The video shows members of a “notorious” West Country hunt allowing the hounds to continue for nearly a minute. Despite this, local police say they’re unable to take action.

Hounds on a sett entrance

Kate Bradley captured footage of the Blackmore and Sparkford Vale Hunt (BSV) during a meet near the village of Thornford, Dorset, on 27 February. The eight-minute uncut video shows Bradley clued into the hunt’s location thanks to terriermen on two quad bikes. Hounds can then be heard ‘in cry’, meaning they’ve picked up the scent of an animal, as Bradley approaches the trees. Running in, she tells a member of the hunt that the hounds are “on a sett… an active sett”.

The video then shows several hounds taking interest in the ground beneath branches, including one hound clearly ‘marking’, or digging into, a sett entrance. This usually occurs when there is a fox inside the sett. Despite this, members of the hunt take more than 90 seconds to call the hounds away. One man in a black jacket even makes fun of Bradley, mocking her claim that it’s an active sett and goading her into pushing him. Other members of the hunt and its followers watch on but do nothing to stop the hounds.

Speaking to The Canary, Bradley said:

I am… an independent sett watcher and was secretly standing by the sett and filmed and watched [huntsman Mark Doggerel] lead the dogs to the sett.

The [huntsman] or the whipper in made no attempt to move the dogs off and the hunters claimed they were legally hunting within the law.

The sett has been logged as active with Dorset Badger group since 2015 and has remained active ever since.

Other videos on Bradley’s YouTube channel show trail camera footage from what she told The Canary is the same location. Clips from February 2017 and January 2020 show badgers around the sett.

The Canary contacted Dorset Badger Group to ask about the incident. A spokesperson for the group said that Bradley has reported the location to them as an active sett “for several years”. However, they hadn’t themselves monitored the site so couldn’t personally confirm it as an active sett. Commenting on Bradley’s footage of BSV, the group went on to say:

I think the video makes it perfectly clear that the BSV intentionally have the dogs on a badger sett and they are making no attempt to get them away.

Monitoring group Wildlife Witness published an edited version of the video in February. The group describes BSV as ‘notorious fox killers’ and suggests Bradley’s actions stopped the hunt from killing a fox.

This type of activity isn’t a one-off occurrence. Fox hunting is intimately connected with badger persecution because foxes will ‘go to ground’, or hide from the hounds, in badger setts. It’s traditionally the role of a terrierman to find the fox inside the sett before digging it out, and either handing it back to the hunt or killing the fox. The Canary previously reported on a video showing terriermen connected to the Mendip Farmers Hunt, also persecuting a sett. Sab groups across the country have filmed similar scenes of badger persecution, with footage by West Midlands Hunt Saboteurs, Devon County Hunt Saboteurs, Peterborough Hunt Sabs, and Three Counties Hunt Saboteurs in 2020 alone.

The Protection of Badgers Act 1992 explicitly prohibits any form of damaging or interfering with setts, including “reckless” actions that could lead to such damage or interference. Its exemptions for hunting were subsequently repealed by the Hunting Act.

Bradley reported the incident to Dorset Police on 8 May. However, the investigation wound up without any charges. The Canary contacted Dorset Police for comment; a spokesperson said:

An investigation was carried out into the incident by officers from the local neighbourhood policing team and the rural crime team. Following enquiries and consultation with the Crown Prosecution Service, it was determined that there was insufficient evidence to take the case forward. There are a number for reasons for this, including the delay in reporting that prevented a wildlife crime officer from attending the badger sett at the time of the incident and assessing if it was active on the day.

Dorset Police will investigate any alleged breach of the Hunting Act 2004 and any offences under the Protection of Badgers Act 1992. We would urge anyone with clear evidence of such offending to please report it to us as soon as possible.

The Canary contacted BSV for comment, but the hunt hadn’t responded at the time of publishing.

BSV and its huntsman Doggrell have repeatedly made the news for their actions. The Canary previously reported on footage by Somerset Wildlife Crime showing the hunt’s hounds chasing a fox through a churchyard. The court found Doggrell not guilty of this incident. Other press reports include allegations of further illegal hunting, blocking roads, petitions to remove the hunt and, in 2016, footage of Doggrell trampling a sab. Once again, the court incredibly found Doggrell not guilty of this incident.

Badger persecution is a lesser known horror of fox hunting, although public recognition of terriermen and their actions is growing. What this video shows is the difficulties the legal system faces in prosecuting people for these types of wildlife crimes. As a result, hunts and their associates are able to continue brazenly, without fear of repercussions. That’s why grassroots direct action by hunt saboteurs, and other members of the public, remains pivotal in holding hunts to account.