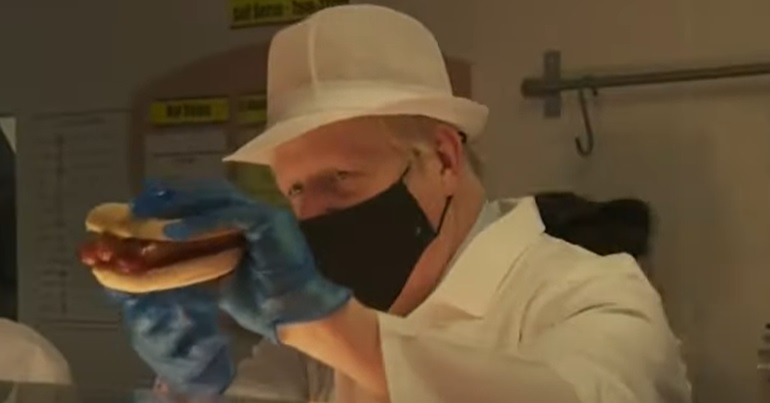 The Conservative government wants to loosen the rules around genetically modified organisms (GMOs) in England. It’s pushing for organisms that are a result of ‘gene-editing’ (GE) and fit certain criteria to no longer be classified as GMOs.

The organisms it’s referring to are, for example, animals that farmers raise for slaughter. The classification change would mean the rules for GMOs wouldn’t apply to these GE organisms. Those rules include strict regulation, close scrutiny, compulsory labelling, and more.

As the Guardian explained, GE involves “cutting and splicing sections of DNA within a single genome to bring about changes” to an organism. The proposed change would essentially allow industries to play fast and loose with such ‘editing’ of organisms. That’s a Frankenstein nightmare of terrifying proportions. Worse still, the Conservative government is proposing the change at a time when the country has no law that recognises the sentience of non-human animals. That means there’s no law that ensures the feelings of these animals receive consideration in decision-making.

A free-for-all on GE and no recognition that the animals being ‘edited’ have feelings. What could possibly go wrong?

As The Canary has previously reported, the actions of Conservative politicians have ensured that the sentience of non-human animals isn’t recognised in UK law post-Brexit. A number of the EU laws relating to such animals were transferred into UK law as a part of the Brexit process. But during a 2017 debate in parliament on whether to transfer over the recognition of their sentience, all Conservative and DUP MPs present voted against doing so.

The decision sparked outrage among the public, charities, and veterinary associations. TV personality Sue Perkins aptly branded the ‘no’ voting MPs “shameful bastards”. That triggered then environment secretary Michael Gove to desperately backpedal, claiming that the UK will recognise their sentience moving forward when it finds “the right legislative vehicle” to do so.

Four years later, and the country is still waiting for that legislative vehicle. Ministers keep claiming they’re committed to enshrining the recognition in law. But, as of 2021, parliament has passed no such legislation.

Although the government hasn’t found the “Parliamentary time” to secure recognition of non-human animals’ feelings, it has found the time to do a consultation on gene-editing. The consultation ended on 17 March. As the Department for Environment, Food and Rural Affairs (Defra) explained in its consultation overview, the UK has retained EU law on GMOs after Brexit. EU law requires that “all GE organisms are classified as GMOs”. But Defra says that its view is that:

As GeneWatch UK noted in its response to the consultation, however, Defra doesn’t define what it means by “could have been produced by traditional breeding”. Instead, GeneWatch says Defra includes it as a question in the consultation. So the department appears sure it wants to free GE organisms – that traditional breeding methods could have produced – from GMO regulation. But it seems open to suggestion on what its own criteria actually means.

A “dark day for animal welfare”

Gene-editing is poised to make this all much worse

Stevenson also noted that the government says GE could help tackle disease in animals used in agriculture. But he warned that this could enable them “to be kept in even worse conditions than now”. He branded the proposal a “dark day for animal welfare”.

The RSPCA, the Soil Association, and the Sustainable Food Trust have all raised concerns over the plan. The National Farmers Union (NFU) and a number of scientists have, meanwhile, welcomed the consultation. The scientific and farming communities are, of course, the industries most likely to directly engage with and financially benefit from GE via research funding, patents, and trading in GE organisms.

GeneWatch UK’s response to the consultation makes for particularly sobering reading. As it points out, current regulations for GMOs cover “the need for health and environmental risk assessments, public information, monitoring, traceability and labelling”. So GE could be exempt from all these requirements if the change goes ahead. The group says “most countries in the world” classify GE organisms as GMOs. So if England opts to be an outlier, it could have “major implications for global trade and for the UK’s internal market”.

GeneWatch UK also notes that the debate around the proposed changes has centered on crops and animals used in agriculture. But it says that “changes to the law would apply to any organism” subject to GE. This includes, for example, wild animals and viruses. The group warns the law change would mean such:

Among the risks the group cites IS an increased use of weedkillers due to the deregulation of GE herbicide-tolerant crops. This could be damaging to biodiversity and human health. It also says “the potential for pathogens, including viruses, bacteria and fungi, to evolve [and become more virulent and/or contagious] in response” to disease resistance in GE plants and animals is a “major area of concern”. Meanwhile, GeneWatch UK warns that, if deregulated, GE meat, eggs, milk, and fish “could enter the market without any traceability or labelling”. This would make it “very difficult to recall products if anything goes wrong”, such as issues arising over food safety.

The group further notes that the majority of potential applications of GE animals in agriculture:

As already mentioned, the UK currently has no law that recognises that such animals can suffer, i.e. that they’re sentient. So their suffering may not even be taken into account.

Recently, the UN said that ‘making peace with nature is the defining task of the 21st Century’. By all accounts, it appears that the UK government has instead opted for conflict. Its vision of the future appears to be one whereby humans (with god complexes) have seized control over nature and other living beings by deforming them at a cellular level and shaped them to their every whim. In that grand plan, it appears these humans will have to pay little heed to the feelings of other living beings, the autonomy of the natural world (and its evolutionary wisdom) or the consequences of their actions. That’s not peace, it’s an act of war.