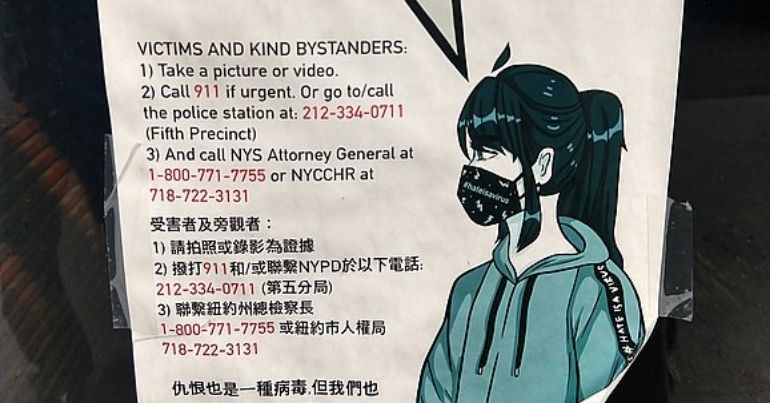 Police arrested 21-year-old Robert Aaron Long and charged him with several counts of murder. Police have identified four of those killed as Ashley Yaun, 33, Paul Andre Michels, 54, Xiaojie Tan, 49, and Daoyou Feng, 44. Although he admitted to the shootings – and most of the victims were Asian women – Long has denied that the attacks were racially motivated.

People have criticised sheriff Jay Baker for his apologist remarks claiming that the shooter had “a sex addiction, and sees these locations as a temptation for him that he wanted to eliminate”, and that “yesterday was a really bad day for him”. Indeed, remarks such as this work to legitimise acts of white supremacist terrorism, and play into racist, misogynistic ideologies that dehumanise, objectify, and fetishise Asian women. It is both concerning and telling that a sheriff involved in the investigation of this tragedy feels comfortable publicly perpetuate these damaging, controlling images.

Sharing thoughts under the #StopAsianHate hashtag, members of the East and Southeast Asian American and Pacific Islander communities are condemning anti-Asian violence following the tragedy. As Christine Liwag Dixon set out, the anti-Asian tropes we see perpetuated in Hollywood are partly to blame for tragedies such as this:

Asian women are so often seen and treated as objects, as trophies and this very real problem is often seen as a punchline i.e. jokes about mail order brides, the portrayal of Asian women in Hollywood.

And Asian women are murdered because of it.

Our folks are pissed off and ready to fight.

The way we get through this is together by organising our people and feeling solidarity.

Call a hate crime what it is. And GOP leaders, stop fanning violence with anti-Asian rhetoric. You should be ashamed at what you have unleashed.

The tragedy is the latest in a spate of violent hate crimes against East and Southeast Asian people in the US and beyond. Advocacy group Stop AAPI Hate revealed that they have received 3,795 reports of anti-Asian hate incidents since the start of the pandemic, a majority of which were from women. This is largely due to the unjust racialisation of the coronavirus (Covid-19) pandemic. We only need to look at mainstream media headlines and comments from high-profile politicians labelling the virus “Kung Flu” to see who is fuelling this rise in hate.

Over the pandemic, the US has seen hundreds of violent cases against East and Southeast Asian people, particularly the elderly. Some of the most recent cases include that of 84-year-old Vicha Ratanapakdee who died after someone pushed him to the pavement in San Fransisco. Someone else pushed a 91-year-old man to the ground in Oakland Chinatown. And 61-year-old Noel Quintana was slashed on the face on the New York subway. Back in July 2020, two men slapping an 89-year-old Asian woman and setting her on fire pushed organisers to establish the They Can’t Burn Us All movement.

Other countries with significant Asian populations have also seen an increase in anti-Asian racism. Police in three major Canadian cities said that they have seen a rise in anti-Asian hate crimes. In Vancouver, hate crimes against people of Asian heritage have risen by 717% since March 2020.

Meanwhile, the UK has seen a 300% increase in crimes targeting people of East and Southeast Asian heritage since the beginning of the pandemic. The violent attacks of Singaporean student Jonathan Mok and Chinese lecturer Peng Wang demonstrate that although members of the East and Southeast diaspora in Britain are incredibly diverse, most are treated with the same forms of racism. According to an Ipsos Mori poll, “one in seven people would avoid people of Chinese origin or appearance” due to the perceived threat of coronavirus. This reflects the deeply ignorant place anti-Asian racism comes from, and the widespread damage it causes.

Support the struggle against anti-Asian hate

The global community must come together to condemn white supremacy and anti-Asian racism in all their toxic forms. Support must go beyond mere expressions of solidarity. Real allyship means calling out xenophobic and anti-Asian sentiment at every turn. It means checking in on Asian friends, family members, and colleagues, and amplifying the voices of East and Southeast Asian activists, organisers, and community members. Finally, it means supporting and donating to organisations that work to challenge racism towards people of East and Southeast Asian heritage. The fight against anti-Asian racism is bound with the global struggle against white supremacy, misogyny, capitalism, and imperialism.