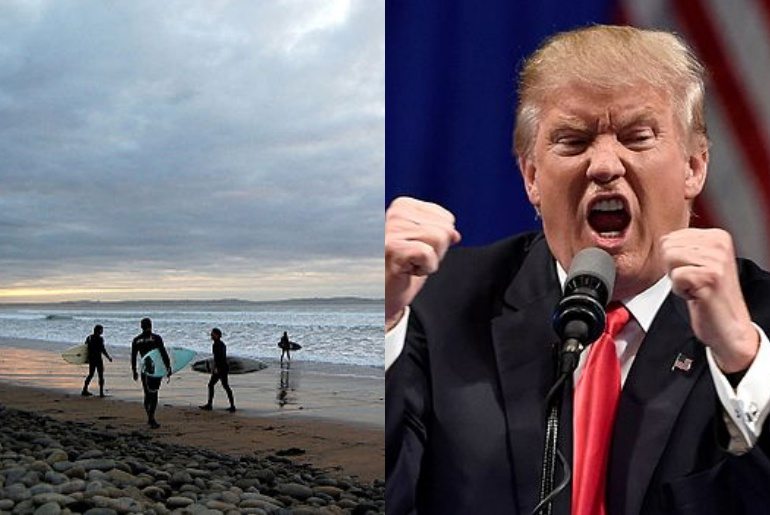 A community group in Ireland has proved it is possible to get Trump to stop building a wall. And in an ironic twist, Trump wanted to build the wall because of that thing he claims doesn’t exist – climate change.

Trump International Golf Links (TIGL) wanted to build a 15ft-tall, 2.8km-long wall on Doughmore Beach. The beach is part of a sand dune system that is a Special Area of Conservation according to the European Union’s Special Habitats Directive. According to a petition signed by over 100,000 people, the wall would:

destroy the sand dune habitat, restrict public access to the beach, negatively impact the quality of the surfing waves, and ultimately result in beach loss.

The petition further stated that:

In all, 31 acres of pristine sand dunes are legally protected and the system provides a unique habitat for the endangered, prehistoric snail, vertigo anguistor.

But campaigners celebrated after TIGL announced it would withdraw its application. Nick Mucha, from Save The Waves, which has been opposing the wall, stated:

We are proud to have brought worldwide attention to this issue and save Doughmore Beach from their ill-conceived proposal.

Our work continues as they consider scaled back measures, but we are excited to spare Doughmore Beach of the monstrous seawall proposal.

Speaking to The Canary, a spokesperson for Trump International said that:

Although the initial application was withdrawn, we will be moving forward with a more judicious application to be submitted this month.

TIGL wants to act and get this proposal through with some urgency. Primarily because the impact of storms and coastal erosion has the company worried. Climate change causes and worsens both of these problems. According to the Trump International spokesperson:

We do not have time to spare as large storm events have proven to be costly in the past. We hope to get approval on the new proposal as soon as possible in full preparation for the impending storms.

Since 2002, an estimated 15m to 20m of dune face has been eroded from the beach front and the golf course.

Hopefully, the new plans will have less of an impact on the local community. Although Trump seems immune to the irony of climate change affecting his Irish golf course. Especially as he just announced that he’s appointing Scott Pruitt as the leader of America’s Environmental Protection Agency. Pruitt has close links to the fossil fuel industry. He also said the science behind climate change is “subject to considerable debate”.

It seems as though Trump only cares about climate change when it affects one of his golf courses. But it does also show that resistance and opposition can stop Trump from building a wall.

– Support Save the Waves