As one woman stands against a fracking bully, she stands for all of us 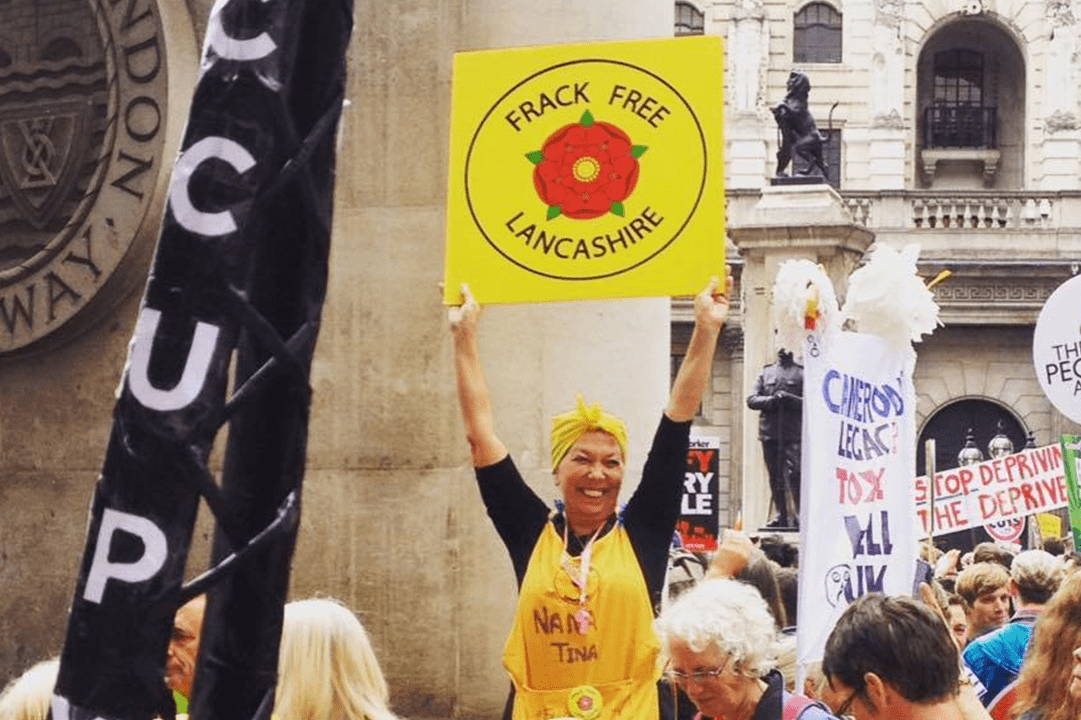 Around lunchtime on 9 December, Tina Louise Rothery will stand in court and refuse to pay £55,000 to shale gas company Cuadrilla. If the judge finds her in contempt of court, Rothery will face two weeks in prison. But she’s not about to back down.

It’s not about the money

At an earlier hearing, Rothery said:

I have huge admiration for a system of justice that is fair but I feel in this case that our law courts are not being used to seek justice but instead being applied like a weapon and a threat against peaceful protest.

The fact that Cuadrilla has the finances, power and vindictiveness to pursue this through our courts is an abuse of one of the most valued aspects of our democracy.

So please accept my apologies if this seems rude but as this case has nothing to do whatsoever with justice, I will not be complying with any requests for information or payment.

Cuadrilla had demanded that Rothery either pay the money or submit her financial details to the court. The company wanted to recover legal costs that it incurred in connection with the eviction of a protest camp near its proposed fracking site in Lancashire. The eviction never took place because the protesters had already left, as they said they would.

Rothery has stated in a published submission to the judge the reason that she agreed to act as a named defendant:

Cuadrilla’s lawyers, representing them and the landowner, attended the court case armed with documents with allegations about the death of a cow amongst other inaccuracies about criminal behaviour as well as a lot of images of people from our community who visited the field. My deep concern that led me to putting my name forward was based on being told that if the case went ahead without a named defendant – it would be uncontested. I feared that lies would be told and the truth could not be defended and this could lead to further implications in the future for those people in the images that were presented to court.

She feels that Cuadrilla is now pursuing her in order to make an example and deter future opposition to fracking. This follows a worrying trend, in which people seeking to defend the environment through peaceful direct action are being bracketed with terrorists, while those wishing to go through the legal system are facing greatly increased financial hurdles.

Rothery clearly feels there is a principle worth standing up for. And so do the many people who have supported her throughout the case. She left an emotional message on her Facebook page the day before the hearing:

Just to say briefly (if I said all that was in my full heart it would be so long) that I have felt a warm blanket of love, support and humanity swaddling me and getting ever more comforting with every moment and it is purely this, that makes everything ok. I will never have the words to thank every single person who shared, commented, messaged and has journeyed along this unknown path too. At this time of year particularly I am deeply aware that the moods that both you and I are in, are impacting our families and the joy we should be building for our little ones… please understand that you have already done more than enough and what will be, will be. Whatever happens, we win because we are ONLY fighting with truth and honour because that’s who we are in all this… the honourable, determined protectors.

It seems certain that her stand will only strengthen the resolve of people who think that fracking should have no place in a properly run UK. And people who don’t like to see companies using bullying tactics to get their way.

– Find an anti-fracking group near you.

– Read Drill or Drop for the latest news on fracking.