As thousands are set to die of fuel poverty this winter, the Tories just made a killing from our energy supply - The Canary 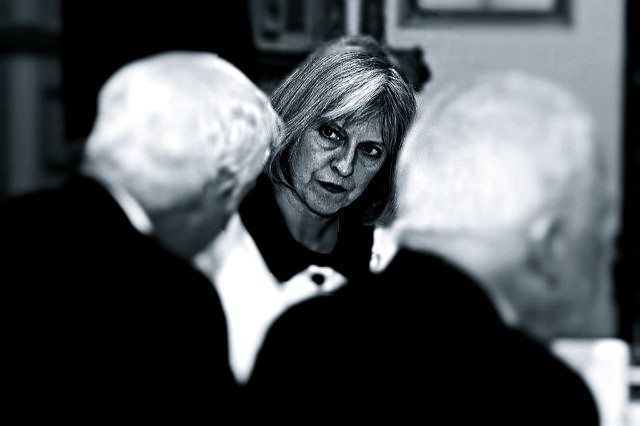 As thousands of people are set to die from fuel poverty this winter, the Tories have just made a killing – from the sale of National Grid. The UK power network operator has sold a 61% stake in its business to a group of companies. And Conservative grandees may directly benefit from the sale.

As The Canary reported last year, over the previous five winters an average of 9,500 people died as a result of cold homes. Three factors tend to cause homes to be dangerously cold: poor energy efficiency, high energy bills and low incomes. And estimates suggest that around 2.4 million homes in England live in ‘fuel poverty’. Fuel poverty means having to spend more than 10% of your income to heat and light the house adequately. This is on top of cooking and washing.

And while energy prices have gone down in the past two years, they are set to rise again. But this time, experts say it’s because of Brexit. As The Guardian reported:

The Co-op [has] told some of its 500,000 energy customers that, from 1 October, it would be raising bills by between 3% and 6%. The latter equating to a potential rise of almost £70. The price of wholesale gas has steadily risen over the last three months but Britain is facing a double hit because gas imports from the continent are about 10% higher still, due to a fall in the value of sterling against the euro [because of Brexit].

But while the public faces a winter of cold homes and rising energy prices, the Tories had some heartwarming news for their bank balances.

National Grid said on Thursday 8 December that it was selling a 61% share of its UK gas distribution business. The company is selling the stake, valued at £13.8bn, to a consortium of companies [paywall]. These include German firm Allianz Capital Partners, the China Investment Corporation (CIC, a state-owned wealth fund), the Australian bank Macquarie, the state-owned Qatar Investment Authority, and Amber Infrastructure and Dalmore Capital (two UK fund managers).

The “best deal for the UK”?

The sale appears to go against Theresa May’s pledge in October [paywall] to vet foreign takeovers of British infrastructure more heavily. The Prime Minister said [paywall] that she wanted the government to be able to intervene in an “orderly and structured” way in sensitive foreign investment. May noted [paywall] that she thought ministers should be allowed to intervene in such deals “to get the best deal for the UK”.

China is already a huge investor in British companies, with CIC owning a 9% stake in another utility company, Thames Water: 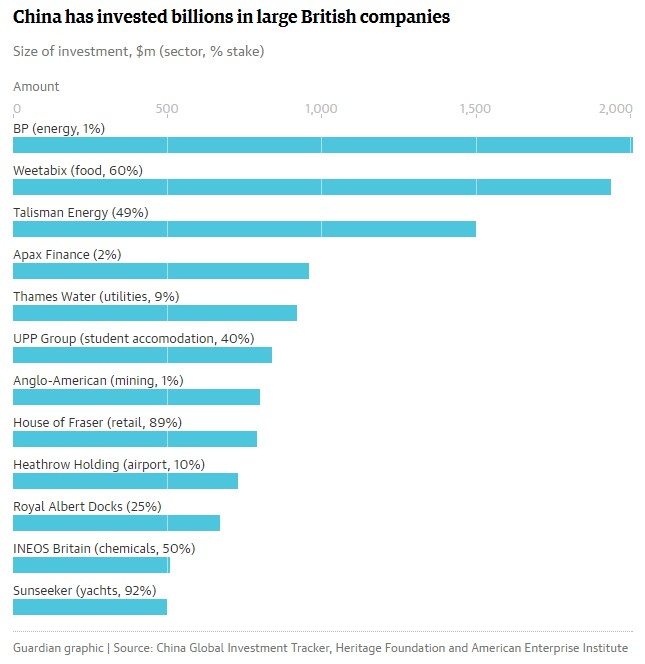 But critics argue that the Conservative government seems hell bent on selling off UK infrastructure to foreign governments. As journalist Robin Lustig wrote in The Huffington Post:

The British approach seems to be not just to flog off the family silver… but to put up on eBay every single thing we might possibly be able to get a price for, up to and including the tiles on the roof.

As with most deals the Conservative government does, however, there seem to be some vested interests at play. And certain Conservative grandees may well benefit from the sale of National Grid.

The Chairman of National Grid is Sir Peter Gershon. He is an adviser to the Conservative government, and also Chairman General Healthcare Group, the largest private sector health firm in the UK – a company that admits it would benefit from NHS spending cuts.

BlackRock, a US investment management company, owns a 6% stake in National Grid. The firm is openly supportive of the Conservatives, having called for [paywall] a Conservative government in 2015. And numerous Tory peers own stakes in BlackRock.

Hermes is owned by the British Telecom Pension Scheme (BTPS). In turn, Hermes manages BTPS investments, along with BlackRock. Hermes also advises and invests on behalf of numerous other UK pension schemes, including the BBC.

The public: paying twice for their gas

Essentially, hundreds of thousands of people who contribute to private pension funds have paid for the stake in National Grid. Then, these people pay again, via National Grid’s gas transportation charges that make up portions of their utility bills.

But this deal is symptomatic of a wider problem with the global financial system. On a larger scale, the same Ponzi-like scheme operates with the UK national debt. Pensions and insurance firms own 23% of public debt. So, again, the public pay into pension and insurance schemes, only for our money to be loaned back to us, in the form of national debt. And then, we pay interest on this. On our own money.

Meanwhile, Tory peers and their chums have benefited from the sale of National Grid. And all while thousands of people cannot afford to heat their homes properly. National Grid’s sell-off epitomises the state of the UK. A society divided into the ‘haves’ and ‘have nots’.

– Read more from The Canary on the Conservative government.