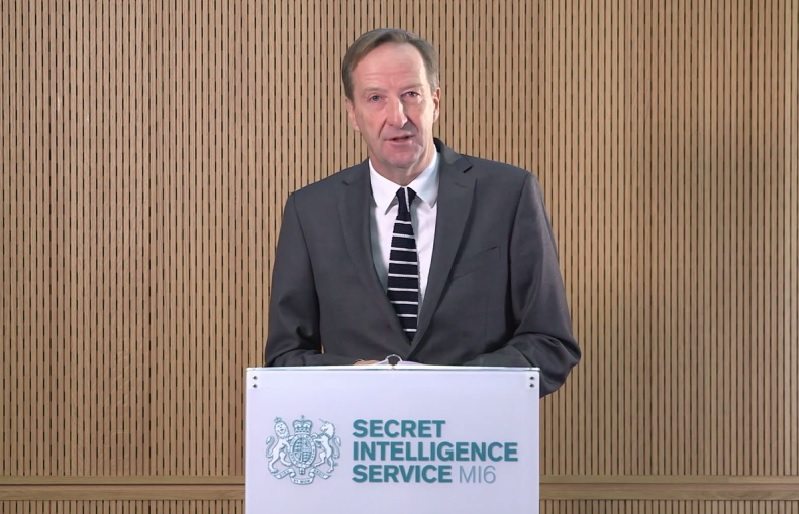 The spies’ new boss, MI6 director-general Alex Younger, gave his first public speech on 8 December. And in it, he warned that the UK faces grave threats.

The most immediate danger, he explained, is terrorism. But not the terrorism the country has been acutely aware of for decades. A new wave of terrorism is on its way, according to Younger. And a particular global duo is the cause of it: Russia and Assad.

Younger has held the post, covertly known as “C”, for two years. And in the rare public appearance, he claimed the UK faces an “unprecedented” terror threat. Younger said:

As I speak, the highly organised external attack planning structures within Daesh (Isis) even as they face military threat, are plotting ways to project violence against the UK and our allies without having to leave Syria

He also insisted that Assad defines anyone who disagrees with his government a terrorist, and “alienates” them. Thereby losing support of the very people he needs to defeat Daesh. He continued:

I believe that Russian conduct in Syria, allied with that of Assad’s discredited regime, will, if they do not change course, provide a tragic example of the perils of forfeiting legitimacy.

Younger conflates three points here. First of all, the UK is in grave danger from terrorists in Syria. Secondly, Assad has weakened his ability to fight them. And thirdly, Russia’s actions are ‘tragically’ making the situation worse.

Of course, the latter remark hints at the need for Assad to step down. The use of words like “legitimacy” and “discredited” make that clear. But by merging these notions, he also seems to lay blame for the threat the UK now faces squarely at Putin and Assad’s feet.

There is no doubt he is correct that the Syrian conflict may produce terrorists. Yet absent from Younger’s remarks was the fact that the UK is also bombing Syria, as part of a US-led coalition. Nor did he mention that terrorists from countries other than Syria already consider the UK a target as a result of its actions.

Because the invasion of Iraq was the clear incubator for Daesh, as was the attack on Libya. And the UK played an integral part in those interventions. Younger hurled a completely valid accusation at others while ignoring his own country’s accountability in the mess.

This is a well-worn political gambit. But it will do nothing to resolve the issue at hand.

Selective tears from the spies’ boss

Younger said the human tragedy in the current battle for Aleppo is “heartbreaking”. And he accused Russia and Assad of seeking to “make a desert, and call it peace” in the city.

Yet the MI6 boss neglected to mention the equally distressing situation in Yemen. UK ally Saudi Arabia is mercilessly bombing that country, in an attempt to restore the government ousted in 2015 by Houthi rebels. It is a conflict that has killed over 10,000 people, displaced around three million, and left many more millions on the brink of starvation.

One Yemeni man recently told The Guardian “Everything is over now”. He lost 27 members of his family in a bomb strike. Yet the heartbreaking human tragedy experienced by these civilians doesn’t even get a cursory mention from Younger.

A threat to sovereignty and democracy

Another threat Younger highlighted was “hybrid warfare”, such as cyber attacks, propaganda and the “subversion of democratic process”. He warned:

The risks at stake are profound and represent a fundamental threat to our sovereignty. They should be a concern to all those who share democratic values.

The US military build up around China, detailed in John Pilger’s documentary The Coming War on China, is also a risk to our “sovereignty”. As is the current dangerous stand off between Russia and NATO on the former’s borders.

Conveniently omitted from Younger’s list of threats is the fact that those who “share democratic values” might also be deeply concerned about the UK’s new spying law. It removes UK citizens’ right to privacy, but will give new unaccountable powers to the security services, including MI6.

Of course, all the threats Younger mentioned are of concern. And Russia and Assad should desist from their brutal attacks inside Syria. But the UK also has a lot to answer for, which Younger simply ignored.

The only ‘house’ the UK has control over is its own. If Younger were to focus as much on getting that in order as he does on the actions of others, we’d be in a much better position than we are right now.

– Sign up to the Open Rights Group’s anti-surveillance campaign.