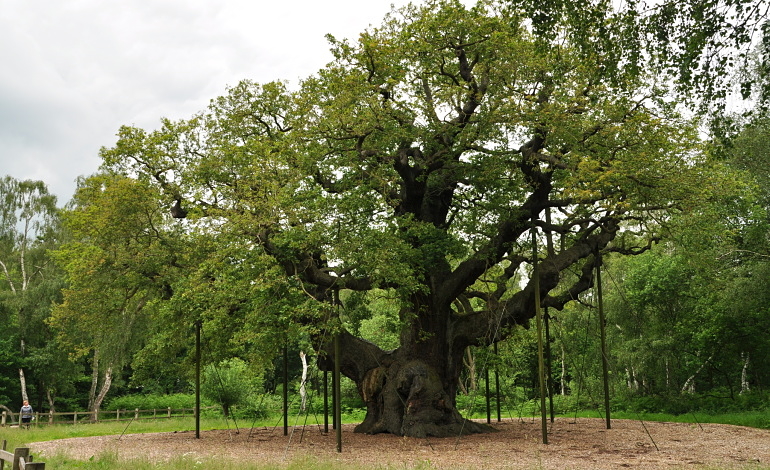 Information gathered via an FOI request from Friends of the Earth has revealed that the chemicals firm INEOS are planning to carry out surveys in historic Sherwood Forest.

Friends of the Earth and other environmental campaigners fear that these ‘seismic surveys’ could lead to fracking.

Why Sherwood Forest is a controversial location

Sherwood Forest is a 450 acre royal forest in Nottinghamshire. It has existed since the ice age. It’s also famous for its association with the legend of Robin Hood.

This is not the first time an area of natural beauty has been opened up to potential fracking for shale gas. Previously, the government has issued exploration licences for around half of Britain. These include 10 of the 13 national parks in England and Wales.

The area to be surveyed in Sherwood Forest is within a few hundred yards of the Major Oak. This 1,000-year-old tree is fabled to be where Robin Hood and his band of merry men sought shelter. Greg Hewitt, a campaigner from Frack Free Sherwood & Edwinstowe, said that people from all over the world:

know of Robin Hood and will show solidarity in the fight against fracking in this beautiful area of Nottinghamshire.

INEOS Shale Operation Director Tom Pickering reacted. He stressed that seismic surveying “does not include fracking in any form”. But this does not mean the firm doesn’t plan to frack in Sherwood Forest if suitable oil and gas reservoirs are found. Pickering went on to say that the data collected will “determine [a] potential drilling location from a geological perspective”.

The firm also argues that the fracking ‘plans’ revealed by Friends of the Earth amount to nothing more than scaremongering. The Forestry Commission – the department responsible for protecting the country’s forests – said:

We have been contacted by INEOS regarding access to the Public Forest Estate in north Nottinghamshire and will carefully consider the potential impacts and their effects. We have not agreed a licence or access to land we manage for INEOS to begin seismic surveys or any other work.

Friends of the Earth previously came under fire for a ‘misleading’ fundraising leaflet. The Advertising Standards Authority (ASA) received the complaint from energy firm Cuadrilla.

Friends of the Earth published a leaflet which had the message ‘DON’T LET FRACKING DESTROY ALL OF THIS’ written on a photo of Grasmere in the Lake District. Fracking groups were not planning work in this area, though. The ASA deemed it misleading as a result. The leaflet claimed that 25% of the chemicals used in fracking could cause cancer. It also underscored that there was a risk of contamination to drinking water.

not make claims about the likely effects of fracking on the health of local populations, drinking water, or property prices in the absence of adequate evidence.

The threat of fracking remains

The ASA closed the case without ruling. But Friends of the Earth maintain that we should be very worried about the risks of fracking to the environment and public health. To reiterate, the Forestry Commission says there are no plans as yet for fracking in Sherwood Forest. But another statement from them suggests otherwise:

The UK will use oil and gas for many decades and using the resources we have in the UK would give us better security over our energy supplies and make us less reliant on imports. INEOS has a licence from the Oil and gas Authority (OGA) for ‘onshore hydrocarbon exploration, appraisal and extraction’. Forestry Commission England will consider any applications from licenced operators to investigate, explore or extract on land we manage.

The Forestry Commission is casually accepting fracking and decades of future fossil fuel use. Previously, the Department of Energy & Climate Change (DECC) said that we will have to rely on shale gas over the next few decades, because the government views it as a “bridging fuel to a greener future”.

But in spite of the ASA’s decision, the concerns voiced by Friends of the Earth are not without substance. A document published by Breast Cancer UK agrees that there is no conclusive evidence of fracking causing breast cancer, but goes on to detail the very real cancer risks of substances associated with the process. Crucially, it casts doubt on the claim that harmful chemicals used in the US would never get past stricter UK rules. Health campaign group Medact has carefully considered claims made by the UK industry and concluded that fracking poses significant risks to public health.

And while the risk of contamination to drinking water may not be serious, there is still uncertainty about the environmental risks of the chemicals used in the fracking process. Another study also concluded:

There is limited academic literature available but findings suggest that the UK government is not fully recognising the inherent risks of hydraulic fracturing exposed by this literature.

Plans are being formulated to frack in the country’s most beautiful areas. Yet we still don’t know the dangers that this activity poses to the environment and public health. All of which suggests a need for caution. Fossil fuels make up the largest source of greenhouse gases. And long-term environmental damage could overshadow any short-term gains from further fossil fuel extraction.

– Support Friends of the Earth.

– Find an anti-fracking group near you.

– Read more on fracking from The Canary.