France passes a historic bill on slaughterhouses, sending a clear message to the UK 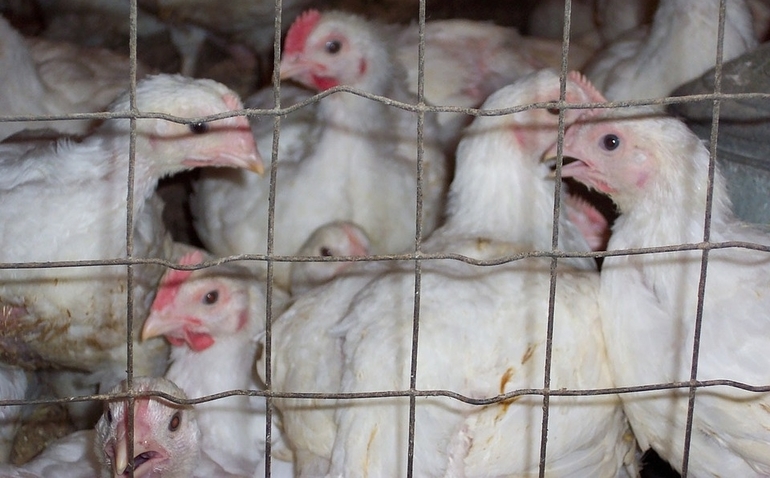 The French Assembly has passed a bill requiring all slaughterhouses to install CCTV cameras.

The move comes after animal rights organisation L214 released a series of undercover investigations to French media outlets. The group has exposed footage of sadistic workers tormenting, brutalising, and butchering animals which are still alive. Abattoirs have been shut down following video footage released by L214.

Cameras will monitor slaughterhouse practices and workers for violations of animal welfare, safety, and hygiene. The new law also includes penalties for animal cruelty violations – six to 12 months in prison, and fines from £6,500 to £17,500.

Last year, the UK Food Standards Agency (FSA) uncovered more than 4,000 severe breaches of animal welfare regulations over the past two years at British abattoirs. Similar to the footage released by L214, inspectors found many instances of cruelty. These included chickens boiled alive, livestock beaten and abused, improper stunning, and truckloads of animals suffocating or freezing to death.

The FSA also found cases of hygiene violations: a malpractice that increases the risk of food poisoning. A recent study found an E. coli infection in two thirds of chickens sold in British supermarkets.

UK animal rights organisation Animal Aid has secretly filmed inside ten randomly selected slaughterhouses. It found that nine of them were breaking animal welfare laws. In light of this, it calls for independently monitored CCTV cameras in all slaughterhouses. 170 MPs, the Farm Animal Welfare Committee (FAWC), the British Veterinary Association (BVA), the FSA, the Green Party, and the SNP all support this measure.

Defra Minister George Eustice has said that the cost of installing these cameras is “relatively modest”. Yet in spite of the widespread support, and proposed costs (between £150,000 and £370,000 a year for all slaughterhouses in England), the government fails to listen.

‘Ag-Gag’ laws in the US mean that uncovering abuses in animal agriculture can be considered a criminal offence. Emily Meredith, communications director for the Animal Agriculture Alliance, says the “animal agriculture industry has nothing to hide”. And she has described animal rights organisations such as The Humane Society as “extreme”.

Essentially, these laws criminalise whistleblowers. Ag-Gag rules can deter slaughterhouse employees from exposing unsafe or illegal working conditions, and can silence animal welfare advocates. Ag-Gag laws have passed in seven states, and animal agriculture lobby groups are pushing for them elsewhere in the US.

Animal rights activists have previously warned about US style Ag-Gag laws spreading to other countries, including the UK. To avoid this scenario, the UK will need to adopt measures similar to France.

Given the scale of animal abuse, and the risks to the environment and human health, the government has little reason to oppose mandatory CCTV in slaughterhouses. Unless, of course, the UK’s industrial farming lobby tries to stop it. Or the Tory government decides to belittle the issue.

– Write to your MP, calling for independently monitored CCTV cameras in slaughterhouses.