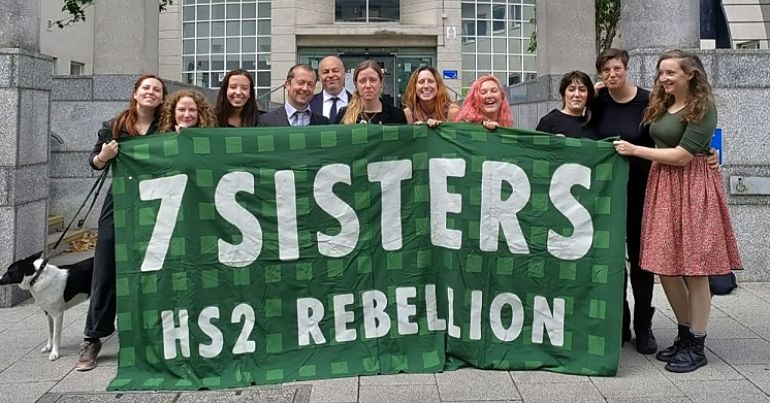 On Monday 2 August, seven women were acquitted of aggravated trespass at Milton Keynes Magistrates’ Court. They were part of the Poor’s Piece Conservation Project in Buckinghamshire and were trying protect the woodland from destruction of the HS2 rail project. They said they were in court:

after being arrested for singing under a 200-year old oak. The tree was threatened with imminent felling by HS2, despite not falling within their boundaries. There were also serious concerns that no bat surveys had taken place,

HS2 is a new high-speed rail network aiming to connect London, Birmingham, Manchester and Leeds, as well as other points in the country.

Up date: VICTORY as all 7 woman [defendants] acquitted this morning on the first day as trial falls apart..

Today, all seven women accused of Aggravated Trespass and section 241 of the Trade Union and Labour Relations Act had the charges against them dismissed. In an unexpected turn of events, District Judge Dodds halted what was set to be a three day trial at Milton Keynes Magistrate Court, as a result of the prosecution’s failure to comply with their disclosure obligations.

HS2 makes it first attempt to fell this tree

On 3 June 2020, two residents of the conservation project sat under the oak tree because they’d heard HS2 machinery approaching. They said the tree “was suspected of hosting bat roosts, which would make felling illegal”.

as the police arrived, the protesters were joined by five other brave women, who had responded to their pleas for support. The seven women sat and protected the oak tree until they were arrested by 30 police officers.

One of the women protecting the tree commented:

How incredible it was to see more coming to sit with us, and sit we did, and we sang. We sang as the police read us our rights, we sang as the police protected the ecologists as they climbed into the tree, we sang as our friends protected us; we sang as 30 officers took us away – 30 police officers for 7 singing women protecting an oak tree – we sang in the cells for 12 hours; through the night; and we s[a]ng when we were released. All united in one heartfelt gesture of activism and protection.

The tree comes down

Campaigners claim the actions of these women prevented HS2 from cutting the down oak in June. But HS2 returned and eventually cut it down at the end of September 2020.

the “7seven sisters oak” did not stand within HS2’s boundaries and therefore its felling, like so many other trees near the route, was both needless and gratuitous.

a community of conscientious Earth Protectors, who shield the woodland from the threat of the HS2 development.

Poor’s Piece was planted many generations ago to provide fire wood for the poorer members of the community. It is the “poor’s piece” of woodland. As a symbol of community and sustainability, it has become emblematic of what campaigners against HS2 are fighting against.

The woodland is under threat by HS2 and is home to many species of wildlife, including red kites, yellow hammers, badgers, bats and insects.

On 31 July, the Telegraph reported that Natural England, the environmental advisory agency, “handed the company developing HS2 nine warnings” for breaching wildlife licences. Six of these relate to how the company dealt with bats, while the others relate to great crested newts.

The cost to nature

Meanwhile, The Wildlife Trusts report into the HS2, What’s the Damage? Why HS2 will cost nature so much stated:

The report reveals that the construction of HS2 will destroy and fragment large swathes of natural habitat and important protected wildlife sites, resulting in the loss of irreplaceable habitats, the increased fragmentation of remaining habitats, and the local extinction of endangered species.

And it concluded that:

the proposed HS2 scheme will be devastating to the natural environment by:

The Canary contacted the Bat Conservation Trust for comment. It said it didn’t comment on individual cases but its HS2 position states:

BCT’s previous position statement and update on HS2 highlighted our concerns in relation to the impact of ancient woodland loss on bats. We continue to be concerned with the inadequacy of proposed compensation (translocation of ancient woodland soils and new planting) due to very slow maturation rates and the need for habitat continuity for species reliant on ancient woodland features, including some of our rarest bat species.

And in March this year it wrote:

Regardless of the approach taken to bat surveys, mitigation and licensing, the overarching issue cannot be ignored, which is that HS2 involves the removal or damage of at least 108 Ancient Woodlands. These are irreplaceable habitats that have developed over hundreds of years, which support countless species of wildlife.

The loss of bat roosts and commuting and foraging habitats in these Ancient Woodlands cannot be compensated for within a meaningful timescale for important bat populations by any amount of new planting, veteranisation of trees and the erection of bat boxes.

The Canary contacted HS2 for comment before this case was heard, . A spokesperson said:

We are working hard to reduce the impact of construction on the natural environment, and have carefully designed our works to reduce the loss of trees wherever possible, including reducing the amount of woodland impacted at Poor’s Piece by 30% over the last year. We are delivering Britain’s biggest environmental programme through tailored ecology plans that provide better habitats for local wildlife and protected species, with 700,000 trees already planted and over 100 wildlife sites created between London and the West Midlands.

But campaigners paint a different picture:

Since our arrest, so much has been taken – so many trees, so much biodiversity loss, so many arrests (but so few prosecutions!), so many evictions, so many court cases, but still HS2 continues. In the face of climate crisis, we have a responsibility to ourselves, our children, our communities and the planet. Those wrongly placed in positions of leadership are flaunting their power and highlighting their greed through consistent acts of destruction.

We need to protect our delicate ecology and work with nature to heal the damage that has been done. The 7 sisters oak is a symbol for what we fight for. We continue to fight.

I am both delighted and relieved with the outcome of our case, however the real question still remains in my mind unresolved as to what HS2 would of done that day had we not held them to account with protest and how many more trees, rare species and their habitat have been and will be desecrated in what continues to be the largest ecocide project the UK government has done to date. At what point will the real criminals in this country be prosecuted? And at what point will the UK public see through the political green wash being given to them by our Transport Department?