Smart drugs are a symptom of our working culture, not the solution to it - Canary 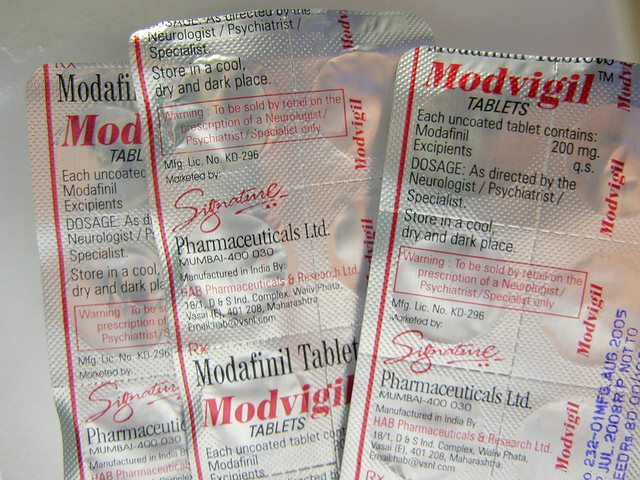 It starts with an alarm at 5am; drop a little white pill and get back to bed, ready to wake up enhanced, brighter than the rising sun.

That warm glow of increased cognitive power has, according to student network website The Tab, been felt by one in five university students in the UK. Tom Stamp, a boarding school graduate in Somerset, whose name has been changed, took the smart drug modafinil leading up to his final A-level exams.

“I felt as though it helped to keep me focused for a much longer time than a cup of coffee or whatever else,” he said, remembering his experience of taking a pill that is medically licensed to treat narcolepsy.

“I could study for a longer time and there wasn’t any jittering like I get from caffeine, so it worked on a few levels,” he said.

Tom’s positive experience with modafinil was echoed in a recent article by Vice magazine, although the NHS has taken a more skeptical view regarding the drug’s cognitive benefits.

Study subjects taking modafinil actually took longer to complete a cognitive test than those who were administered placebos, according to NHS.co.uk.

And, while admitting that “modafinil may have different effects on performance of different tests,” the NHS points to the European Medicines Agency’s conclusion that any benefits of the drug” outweigh the risks only for the treatment of narcolepsy.”

This conclusion, however, is lifted from a pool of inconclusive and limited research, where the length of study has not yet been long enough to extract decisive results.

So far studies have found modafinil to have almost no side effects, with the main medical concern centred on the drug’s ability to increase dopamine levels, a characteristic it shares with addictive substances including cocaine, methamphetamine and nicotine.

Tom said the prospect of addiction wasn’t really playing on his mind when he purchased the pills online.

“Really the scariest thing was that I was buying them online and you don’t really know where they were coming from,” he said. “But they looked well packed when they arrived so I didn’t really worry after that.”

There seems to be little hesitation when it comes to buying drugs online, with millennials quick to trust their instincts over government warnings. And it looks as though even skeptical students are willing to risk their health for the reward of harder studying.

This is, after all, a student body paying more in tuition fees than any of their predecessors, a generation that understands its education as an investment, now it is no longer a privilege. So when given the chance to maximise that investment by taking a pill promising to provide better and longer concentration, there are many young people that see the question of whether or not to experiment with smart drugs as a ‘no brainer’.

However, Dr David Sack, an expert in behavioural health and addiction calls the use of cognitive enhancement drugs by healthy people a ‘high risk-low reward’ preposition.

“Although we don’t fully understand the short- and long-term implications of using these drugs on healthy people, we know that the potential side effects range from anxiety, insomnia and depression to headaches, increased heart rate and psychosis,” Dr Sack said.

Julian Savulescu, chair of the Uehiro Centre of Practical Ethics at Oxford University, talks of the quickening of scientific advancement that could happen if smart drugs were to be used on a wide scale. He argues that, while the evolution of ideas would be faster with cognitive enhancement, and this may not necessarily be a good thing.

In an essay, titled The Perils of Cognitive Enhancement and the Urgent Imperative to Enhance the Moral Character of Humanity, Professor Savulescu, along with his colleague Ingmar Persson, argues that we could do with being ‘better people’ with more developed ethical maturity at the same time as becoming ‘better people’ in terms of our greater effectiveness. Without this balance, Savulescu argues, the world could be in danger. To illustrate this thinking, he talks about how a world of cognitive enhancement could see terrorists and rogue states discovering techniques to enrich uranium much faster.

Emma Jane from USNW Australia and Nicole Vincent Associate Professor of Philosophy, Law, and Neuroscience at Georgia State University have co-authored a piece on The Conversation, discussing how the issue affects society as a whole. They argue that these drugs don’t just affect the lives of those who do take them, but also those who do not.

The article paints a dystopian vision of society, in which working in a cognitively enhanced state becomes the new normal as ‘natural’ employees struggle to keep up with their enhanced peers. The result of what Jane and Vincent call this ‘mass social experiment’ could be a world in which some unethical business owners choose to over-work their employees even more, instead of taking on the bigger challenge of changing their business processes to support the ‘smarter working’ practices they claim to espouse. A world where everyone’s work life resembles the conditions reported at an Amazon warehouse.

It could also affect who we become in the workplace: ultra-competitive people who are highly productive, but with no time – or even desire – for free time and relationships.

This hasn’t stopped the thousands of people who are using smart drugs because they believe these cognitive enhancers will help them through the stresses of modern life. But we need to understand that the demand for cognitive enhancers is a symptom of our working culture, rather than a cure for it. Instead of just taking this trend for granted, we need to use the uptake in smart drug usage as evidence that our society is being stretched to breaking point.

Jane and Vincent suggest breathtakingly simple alternative to this ‘always on’, always productive state of being. It involves:

“stopping work at a reasonable hour, hanging out with our favourite children, pets, and friends, doing the exercise and balanced meal thing, and then attempting (but failing) to get a decent night’s sleep.”

There are already smarter, more productive societies with humane and balanced working conditions –  what we need to do is emulate them. We have known for a long time about the ‘law of diminishing returns’ that kicks in when people work over 40 hours per week. Research by the New Economics Foundation states that a 30-hour week is ideal. Interestingly, the Scriptonite blog makes a compelling case for the northern European approach:

“Many nations have embraced this wisdom and begun transitioning their economies accordingly. Sweden began an experiment in shorter workweeks last Summer, Germany has a policy of kurzarbeit, or shorter working hours, in Denmark workers have shorter days and five-six weeks of paid annual leave – all to fight unemployment, spread around available work, and ensure that citizens have the time and energy to perform their multitude of other roles in life (parent, friend, carer, etc) well too. In short, to create happier, healthier societies.

The result speak for themselves. These nations are developed, prosperous, innovative, and repeatedly top the OECD’s Better Life index.“

Smart drugs may help some people, but what we need more urgently is a smarter society – one which gives people the tools and the space to be productive and healthy in all areas of their lives. Policymakers and business owners need to work with – and not against – employees in bringing this possibility into reality.