Police beat us, but we still stand with refugees - Canary 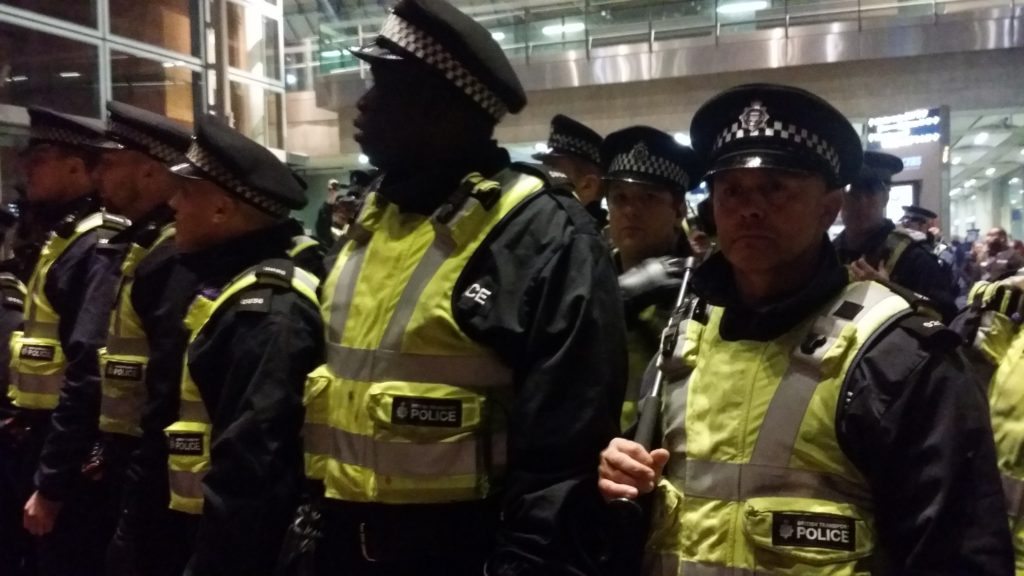 On Saturday evening 300 people attempted to enter St Pancras International train station to protest in solidarity with refugees in Calais. But a larger number of police reacted with surveillance and violence.

As the protest took place on the same day as the nearby Anarchist Book Fair, the number of police officers in the area steadily increased throughout the day, with people reporting large numbers of police vans, officers at station entrances, and Evidence Gathering Teams patrolling inside the station several hours before the protest started.

Approximately an hour before the advertised 6pm protest start time, officers gathered on the conveniently located ‘viewing platform’ opposite the book fair where they were able to monitor people, collect data, and spot known activists.

The protest, organised by Calais Migrant Solidarity, was called to mark the deaths of 19 people killed this year in Calais, 13 of whom were killed in the tunnel, the imprisonment of three people in the UK after walking through the tunnel, and the mass arrests which have recently taken place in Calais.

Can we make our solidarity active and alive and bring a dose of this passion back to the capital cities?

There was certainly passion on Saturday’s protest. Despite the rain, people, many of them masked to avoid police surveillance, remained spirited. Flares and fireworks were let off en route, and around a hundred people managed to break through the police lines into the station. They were quickly thrown out, and the British Transport Police drew their batons to beat people back.

People remained pro-active, using nearby barriers to try and unsuccessfully force their way through their lines. However, the numbers of police present meant it wasn’t long before the protest was pushed back, ending up back in Granary Square where the book fair had taken place.

It seemed clear the police didn’t want to risk a repeat of the previous week’s protest, when Sisters Uncut, Black Dissidents, and London Latinxs blockaded the entrance to the Eurostar, in an action which saw activists super gluing their hands around ticket barriers, and pouring fake blood on the floor of the station.

Tatiana Garavito, who took part in the action wrote:

By blocking the Eurostar gates, lying down in a ‘die-in’, chanting ‘this is what a border looks like,’ we created an actual border that prevented the movements of people who otherwise have the privilege of crossing borders with ease.

The number of refugees entering the Mediterranean has exceeded 700,000, and at least 3,000 have died. Desperate people are living in appalling circumstances driven from their homes and lives due to wars our government has helped to create, and our arms companies have profited from.

Set against this, Cameron’s pledge to take 20,000 refugees from Syria by 2020 is a ludicrous, pathetic stance, meaning the hundreds of thousands currently suffering in Europe are ignored by the UK.

The enormity of the refugee crisis means we have to take action to make the government open the borders. They have not listened to legal protest – they have not listened to the peaceful gatherings which have taken place around the country to welcome refugees into our communities – and so we need to take more radical action to ensure our country takes responsibility for our part in this humanitarian disaster.

Be warned, this action is not a one off. We need sustained resistance from all directions until we see an end to the racist, oppressive immigration system.