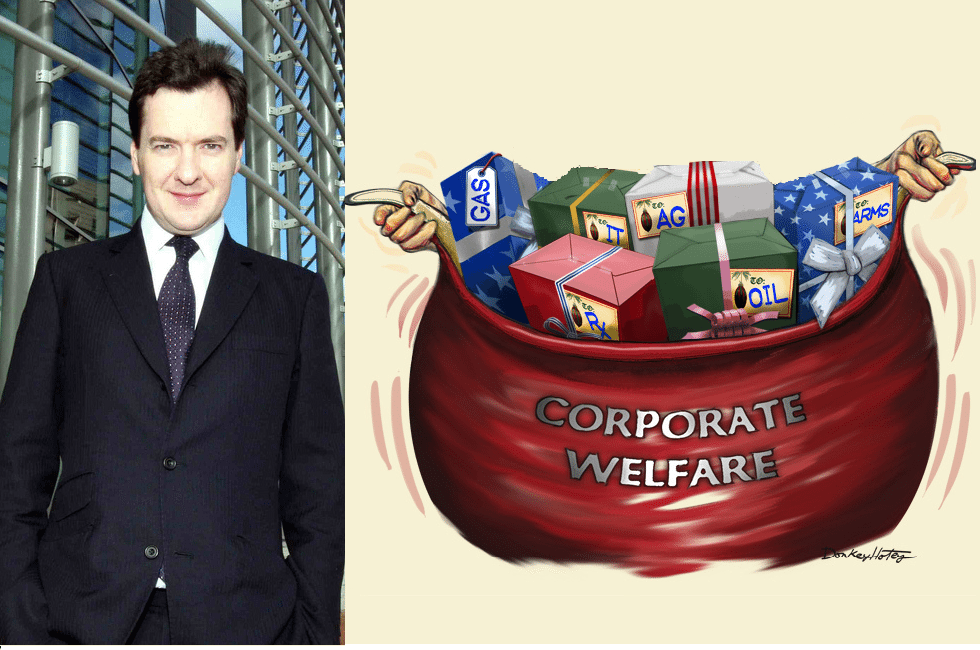 George Osborne’s planned tax credit cuts have been a topic of heated debate, but absent is the nature of tax credits themselves: they are corporate, rather than social, welfare.

Employees are working full time, but it is the employer who is not paying enough. Tax credits operate as a wage subsidy for employers. To stop the taxpayer having to compensate, tax credits should be cut, but only if a living wage simultaneously replaces them.

But isn’t the government introducing a national living wage? Well, in April 2016 wages will rise to £7.20 per hour and are set to increase to £9 by 2020. Rhys Moore, the director of the Living Wage Foundation, said “this is effectively a higher national minimum wage and not a living wage”. Currently the living wage is set at £9.15 per hour in London and £7.85 elsewhere. Osborne’s ‘living wage’ (NLW) not only pretends London doesn’t exist, but is also subpar for the rest of the country.

Additionally, Osborne’s proposals are not applicable to the under 25s. Poorly paid jobs are typically low-skilled –  a few extra years will hardly make you better at stacking shelves. And young people need money too – it’s a stealth tax on parents.

Most significantly, Osborne’s NLW fails to compensate for the proposed cuts to tax credits, leaving recipients up to £1,000 worse off per year as soon as they come into force. It is likely further welfare cuts will also necessitate an increase to the real living wage. This means the gap between the living wage itself and Osborne’s will widen further. The Conservatives have hijacked the buzzword ‘living wage’ and appropriated it onto their own substandard version.

The problem with a national living wage

Tax credits should be cut, in order that they are replaced by a pay rise. However, a one size fits all national living wage is itself problematic: it assumes all businesses have the means to pay it. You cannot equate small businesses with huge multinationals. John Allan, chair of the Federation of Small Businesses, said Osborne’s planned living wage:

will pose big challenges for many small firms, particularly those in the hospitality, retail and social care sectors where low pay is common and margins tight.

Meanwhile, huge corporations could pay it with ease. British company Monsoon has failed to pay even the current minimum wage, yet in 2013 reported pre-tax profits of £18.1m.

Neither Osborne’s, nor the real living wage should be implemented wholesale. Martin Green, the chief executive of Care England, has warned Osborne:

without adequate funding to pay for the national living wage, the care sector is at serious risk of catastrophic collapse.

There should be a threshold; the national living wage should apply after a certain turnover. The rate of corporation tax a company pays depends upon how much profit it makes. The same could be done for employee wages. On the other hand, companies who do not make enough should qualify for tax credits. If companies like Care England need a hand with their wage payments, tax credits can be there.

Additionally, tax credits are means tested, so each individual is judged on whether they qualify. If the real national living wage was introduced where it could be, fewer people would need tax credits, resulting in a lower bureaucratic burden for the state. Means testing each business, rather than each person would also reduce administration.

Osborne’s tax credit cuts were just blocked in parliament in a motion by crossbencher Baroness Meacher, until further assessment. A stronger motion, proposed by Baroness Hollis, was also passed insisting on three years of transitional financial help. John McDonnell has said “we need a U turn” from the government over the proposed cuts. Rightly so, but only insofar as they are not replaced by a living wage, cutting the corporate welfare bill.

You’d think in times of austerity the cost of corporate welfare would be laid out bare and scrutinised. We constantly hear about the cost of the social welfare bill. Yet, the government tells us almost nothing about how much it hands corporations and the figures are hard to obtain. A new database being compiled by Kevin Farnsworth, the first of its kind, is detailing the extent of corporate welfare. First Scotrail received a train subsidy of £525m in 2012, Arriva Trains enjoyed a hand out of £349m the same year. We’re paying for our train tickets twice.

In the financial year 2011-12 the grants and subsidies paid directly to businesses adds up to over £14bn. Three times more than the £5bn bill for job seeker’s allowance. From 2007-14 the government handed Disney nearly £170m to make films in the UK – talk about taking the mickey.

A less conspicuous form of corporate welfare is tipping restaurant staff. Like tax credits, the public are footing the bill for companies who are not paying working people enough to live on.

Cutting tax credits would cut corporate welfare. However, Osborne’s cuts are not replaced by enough of a wage increase and remain a #workpenalty. If we introduced a proper national living wage for companies who can afford it, we could cut unnecessary corporate welfare, leaving the taxpayer better off.