Why is the US still blockading Cuba? - Canary 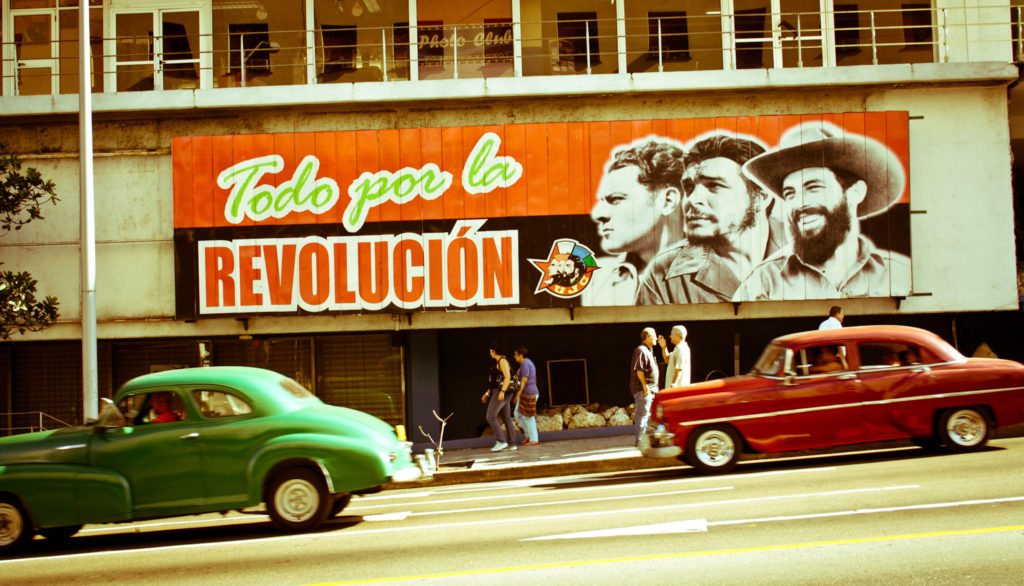 At the end of last year it looked hopeful that Cuba was finally going to be able to benefit from the new-found spirit of engagement with the US. Despite some progress, the stalemate continues and Cuban people are still suffering.

On Tuesday we witnessed the presentation, for the 24th time, of Cuba’s draft resolution to the United Nations General Assembly: “Necessity of ending the economic, commercial and financial embargo imposed by the United States of America against Cuba.”  Despite the renewal in December 2014 of diplomatic relations between Cuba and the US, for the 24th time the US and Israel again stood alone by voting against lifting the blockade.

Last year, there were three abstentions in the UN vote. This year, for the first time ever, there were none. Aside from the two “no” votes, the resolution was supported unanimously, with the remaining 191 nations voting in favour of Cuba’s draft resolution.

Many people listened to President Obama’s political rhetoric in December 2014 of “normalization”, with his encouraging opening line:

Today, the United States of America is changing its relationship with the people of Cuba.

to which he added:

no other nation joins us in imposing these sanctions.

Although he does not mention the continued support from Israel, the fact that, for the first time ever, no country abstained in Tuesday’s vote, is an even clearer confirmation of no other nations joining the US in the sanctions.

Many US politicians, such as Jeb Bush and Marco Rubio, have denounced Obama’s keenness to adopt a new approach towards Cuba. And, of course, it is of note that the focus was on the “relationship with the people of Cuba”, not the government.

I also believe that more resources should be able to reach the Cuban people.

That might have indicated an end to sanctions, a precondition to normalisation required by the Cuban government. There was reason to hope that this year the US administration would act in accordance with the spirit of engagement expressed by Presidents Castro and Obama ten months ago. US Secretary of State John Kerry, various Congressmen and women, and Senators have all visited Cuba this year. They were apparently universally satisfied that their own designation of Cuba as a state sponsor of terrorism was not appropriate. The designation was removed in May after no case was presented for it remaining in place.

Progress has been achieved in relations between the two countries. However, in the draft resolution presented to yesterday’s United Nations General Assembly, Cuba’s Foreign Minister, Bruno Rodríguez Parrilla, highlighted the ongoing enforcement by the US of the 1996 Helms-Burton Act. The Act embeds the blockade, in place since 1960, in law by imposing penalties on third countries trading with Cuba in an express attempt to force a change of government in Cuba, thereby interfering with national sovereignty and Cuba’s right to self-determination.

Rodríguez Parrilla made a clear call to President Obama to exercise his presidential powers to curb the application of the economic, commercial and financial blockade with the words:

While it is up to the US Congress to adopt the decision to put an end to the blockade, the President has broad executive prerogatives to substantially modify its practical implementation and its humanitarian and economic impact.

Historically, the United States has intended to establish its domination and hegemony on our homeland and, since 1959, it has tried to change the political, economic and social system that our people, fully exercising the right to self-determination, has freely chosen.
Some spokespersons from the US Government have declared that the announced Cuba policy is about a change of methods, not goals.
Should this be the case, the process towards the normalization of relations between the United States and Cuba will face very serious obstacles.
The lifting of the blockade will be the essential element that will give some meaning to the progress achieved in the last few months in the relations between both countries and shall set the pace towards normalization.
As has been recognized by President Barack Obama, the lifting of the blockade serves the US national interest and is the will its citizens.

We find that the rumours reported last week in The Canary relating to Israel’s stance and a possible abstention by the US in the unenforceable UN resolution vote depended on Cuba rewording the resolution. The US administration was holding out for a revision to Cuba’s draft resolution claiming it did “not ‘fully reflect’ the new spirit of engagement between the former cold war foes”.

Nor does a continuing economic, commercial and financial blockade. Rodríguez Parrilla’s address to the UN points to sanctions applied since December which also fail to reflect this new spirit of engagement.

The Cuban government remains clear and insistent. The blockade has to end before normalisation can result. Raúl Castro stated this in December 2014:

Cuba reiterates its willingness to cooperate in multilateral bodies, such as the United Nations. While acknowledging our profound differences, particularly on issues related to national sovereignty, democracy, human rights and foreign policy, I reaffirm our willingness to dialogue on all these issues. I call upon the Government of the United States to remove the obstacles hindering or restricting ties between peoples, families, and citizens of both countries, particularly restrictions on travelling, direct post services, and telecommunications.

But the measures adopted by the US Administration, which came into force on January 16 this year and were later on expanded on September 18, although positive, only modify, in a very limited way, some elements related to the implementation of the blockade.

And that is not the whole picture. In Rodriguez Parrilla’s words:

Any attempt to condition the lifting or modification of the blockade to the introduction of internal changes in Cuba will be in no way acceptable nor productive.

While acknowledging “progress achieved in the course of last year”, it is clear that President Raul Castro’s words from December 2014 still pertain:

I have reiterated in [sic] many occasions our willingness to hold a respectful dialogue with the United States on the basis of sovereign equality, in order to deal reciprocally with a wide variety of topics without detriment to the national Independence and self-determination of our people.

So the stalemate continues. Cuba continues to demand its right to equality and self-determination and call for the end of what the US calls the “embargo”. Meanwhile the US continues to apply sanctions while no vote on their removal is presented to the Republican-majority US Congress, the only body with competence to change the law.

We can celebrate that the way has been opened for normalisation but we cannot ignore that, so far, all advances to date remain tentative. With no change in the law, the blockade can be applied with the same vigour as it has been to date. One could speculate that this allows US companies to implant themselves in Cuba while applying sanctions to other countries wishing to take advantage of the new engagement with the US. That may be simple cynicism.

It may be true that with US presidential elections due next year, and Obama not permitted to stand for a third term, the US “no” vote may have more to do with their own internal politics. The fact remains that for now any statements about making life better for Cubans are more easily understood as the language of rhetoric, not reality. For now it looks like all those people who have been rushing to Cuba “before it changes” have a bit more time. The people in Cuba, meanwhile, are obliged to suffer the harsh consequences.

You can keep up to date on developments in the US-Cuba normalisation process, and be involved at Rock Around The Blockade and the Cuba Solidarity Campaign.