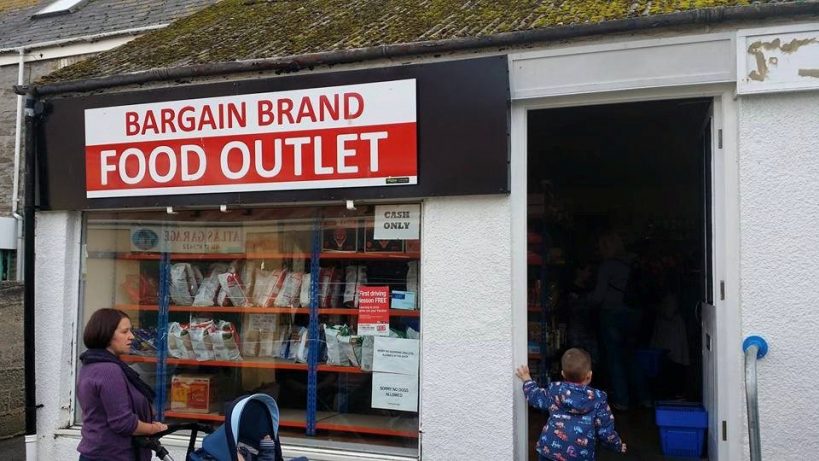 Despite deepening levels of poverty, Cornish communities are showing there are ways of creating alternatives to austerity and deprivation.

One such project is being run by a Cornish woman who has opened a Bargain Brand Supermarket in Newquay.

The shop, opened five months ago by Charlotte Danks, sells branded goods which have been rejected by conventional supermarkets, and would otherwise end up in landfill sites. Although most items in the shop cost 25p, prices can go up to £2.50 for larger items.

Ms Danks, who has lived in Cornwall for the majority of her life, said:

I have seen so many people struggling who can’t afford food. I wanted to do something to help everyone out, not just those on low incomes.

There are plans to expand into other areas of Cornwall, and she is hopeful of shops opening in Redruth, St Austell and Penzance in the near future. There is no referral scheme to purchase goods, and everyone is welcome. Although set a short walk out of town – Ms Danks said it would cost her £6000 more to be located in a central location – the shop is thriving.

There is no doubt such shops are needed in Cornwall. Whilst the county is more widely known as a tourist destination with golden beaches and stunning landscapes, Cornwall has huge levels of poverty. In 2014, Cornwall became the poorest place in the UK, and is still the only place in England to qualify for European Convergence funding, having a GDP 75% below the average of other European areas in the period between 2007-2013.

Foodbank use has more than doubled over the last three years, with the manager of the foodbank in one of the most deprived areas, Camborne, Redruth and Pool, reporting in June that food poverty had reached crisis point. One in five households are in fuel poverty, 16,000 children are in poverty, and water and energy costs are significantly higher than elsewhere in the country.

However, whilst the statistics are grim, there are other projects which are building alternatives, such as the Cornwall Childrens Clothes Bank which was set up earlier in the year to “take back our communities and restore our faith in one another”.

The clothes bank started in Camborne and is expanding to other areas, with multiple collection points across the county. Like the Bargain Brand Supermarket, there are no vouchers or referrals needed – it operates on “goodwill alone”.

The thing that has shone through is that people do want to truly help one another, it’s just sometimes they need to be shown how.

However, whilst being very aware of the levels of poverty in Cornwall, she says that even she was “shocked” by some of the stories she has heard:

I don’t think a lot of people realise just how little some people have to get by on. One family simply could not afford winter coats for their children, another couldn’t afford the price of secondary school uniform.

As the impact of the cuts grows deeper, it is easy to feel depressed and powerless. However, whilst these projects won’t alleviate poverty on their own, they do show there are community alternatives and ways to make a difference. In the words of the founding statement of the Cornwall Childrens Clothes Bank:

What we do as a team is about more than simply supplying much needed items. It is about building a better society and enabling communities to come together.