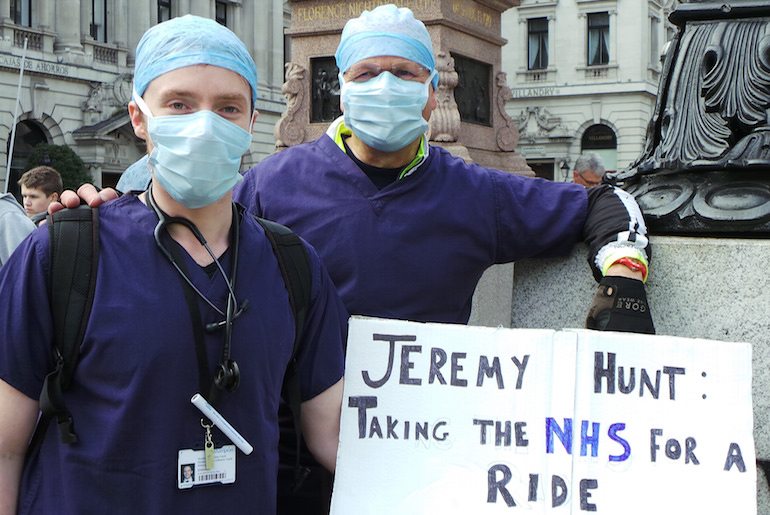 Jeremy Hunt wrote a letter to junior doctors that said:

Today in the House of Commons I am giving a firm guarantee on behalf of the Government that no junior doctor will see their pay cut compared to their current contract.

He repeated the claim in a speech to MPs and on Twitter:

Confirmed in Parliament today that not a single junior dr will get a pay cut compared to their current contract: https://t.co/VrXMij5P5V

But yesterday morning, when pushed by a BBC Breakfast presenter, he admitted that junior doctors working the longest hours will in fact still face a pay cut:

There’s a very small minority of doctors who will be working more than an average of 56 hours and at the moment they get paid what’s called colloquially in the NHS ‘danger money’. We think that’s wrong: actually, we shouldn’t be allowing that to happen; it’s not safe for patients and, frankly, I’m not sure it’s safe for doctors either. But what we are saying is that for the vast majority of doctors who are working within the legal limit there will be no pay cut. We’ll make sure that happens.

It turns out the promise will only apply to doctors working up to 56 hours a week; those forced by their employers to work up to the new legal limit of 72 hours will be left short.

The British Medical Association (BMA) was not impressed. Neither was Twitter:

Today I sent @Jeremy_Hunt a copy of my book 'How to Read a Paper'.
My covering letter here. pic.twitter.com/vhKxV40rUj

Over recent weeks, Jeremy Hunt has tried several tactics to make the junior doctors problem go away. He’s patronised them, insulted them and now, with the BMA due to open a ballot on industrial action next week, he’s tried placating them with half truths. The only thing he hasn’t yet tried is listening to them. Perhaps he should.