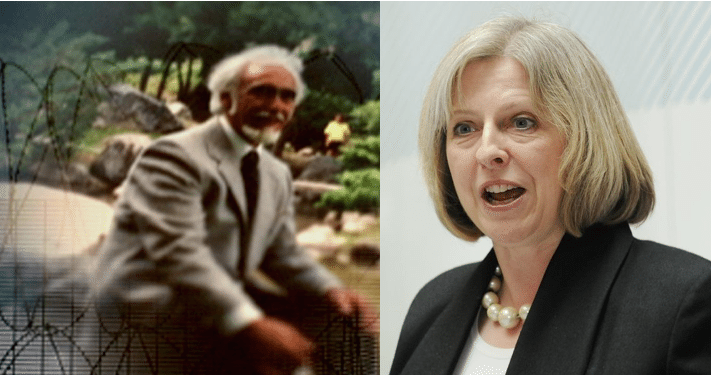 In 2013, 84-year-old engineer Alois Dvorzac suffered a fatal heart attack after being held in shackles for five hours by UK immigration. An inquest this week has has heard he died this way due to the draconian ‘home office rules’ put in place by Home Secretary Theresa May.

Dvorzac, a diagnosed sufferer of dementia, was passing through Gatwick in February 2013 on a journey from Canada to his native Slovenia. He was detained by immigration officials who ruled his explanation of future travel plans insufficient – unsurprising given his illness. Mr Dvorzac was forced to spend the night trying to sleep on chairs in Gatwick’s holding centre, before being moved for medical assessment at East Surrey hospital.

After attempts to contact his daughter failed, Mr Dvorzac was barred entry to the UK and transported to Harmondsworth Immigration Centre – the largest of Britain’s detention centres for immigrants. Vernon Simmonds-Dunne, a detention custody officer at Harmondsworth responsible for elderly detainees, described Mr Dvorzac’s reaction when told he could not return to Slovenia, and that the UK authorities were returning him to Canada.

“He looked a bit tearful. What he actually said was: ‘I don’t have much time. I need to see my family,”

Two weeks later, while still in detention, he suffered the heart attack. Security at the centre kept him handcuffed and shackled to a 6ft chain for the five hours preceding his death.

The most stirring evidence of the nine day inquest came from Paramedic Ricardo Ambrosino, who transported Mr Dvorzac to Hillingdon hospital’s A&E on February 10 2013. He told the inquest:

“The nurse in charge, and there was another nurse there, when they saw him, they were shocked, they were saying: ‘Wow, why is he chained, why is he chained?’ I questioned it as well and I was told it was Home Office procedure. It was unnecessary. He was a frail person. He could barely walk. He was … unwell.”

Senior Coroner Chinyere Inyama asked Ambrosino if the procedures had been put in place due to previous escapes. He replied:

“No, I was just told it was Home Office procedure.”

Theresa May’s iron fist immigration procedures resulted in UK immigration authorities intercepting a frail and vulnerable man on his way home to die with his loved ones. He should have completed that journey, and spent his final days with the people he loved in his place of birth. Instead, he spent them in jail in a foreign land, and died in chains. Is this a price worth paying to look ‘tough on immigration?’

You can see Channel 4’s undercover investigation into the appalling conditions at Harmondsworth Detention Centre in the footage below: