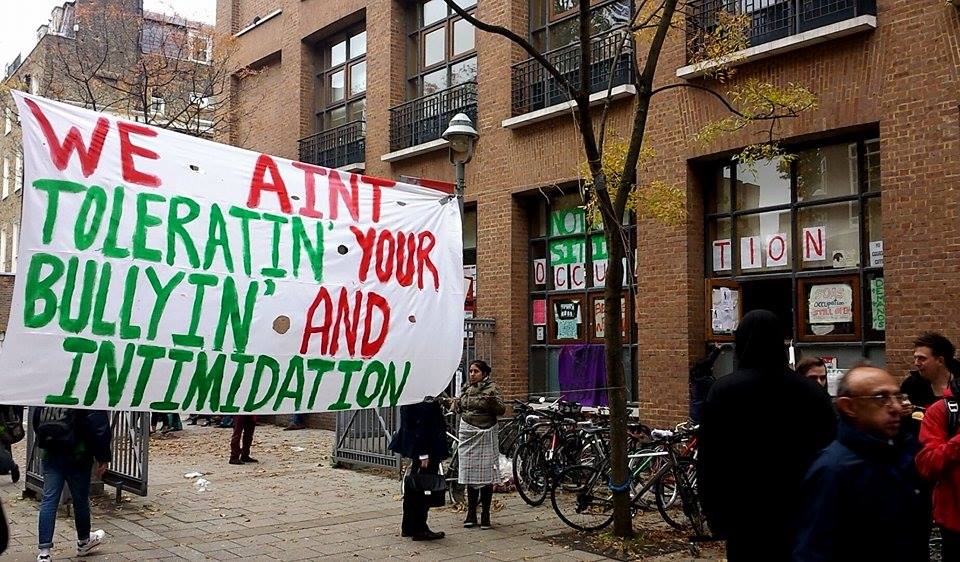 The ongoing stand-off between a student occupation and the executive body of the School of Oriental and African Studies (SOAS) escalated towards the end of last week, after the school’s management attempted to freeze out the occupation by switching off the electricity mains and turning the air-conditioning on to full blast.

At the beginning of this week, several external security guards were brought in, prompting a rally on Tuesday against the management’s actions. A group of 200 people, including several members of staff, gathered on the main campus, and then a number of them entered the building and plastered the directorate with post-it notes spelling out their grievances. Rather than engage with the protesters or even acknowledge their demands, the school’s only response was to suspend Sandy Nicoll, Unison’s long-standing branch secretary for SOAS on allegations of “gross misconduct” for taking part in the rally.

And so this week has ended with a two-day walkout on behalf of Unison and UCU members. They held a picket line in front of SOAS on both Thursday and Friday, demanding the reinstatement of Mr Nicoll. Thursday’s protest received messages of support from UCU and Unison branches across the country, as well as from Shadow Chancellor and lifelong campaigner John McDonnell MP. The SOAS administration decided to close down the university for the day as a result, a move which caused angry reactions from students on social media.

The occupation itself began in early October after a leaked document spelled out the School’s plan to cut 184 courses. The new director of SOAS Baroness Valerie Amos, a former Labour minister and ex-leader of the House of Lords, quickly denied any involvement in the letter, but that is hardly credible seeing how she is the chair of the executive board. SOAS retracted the planned cuts, and instead announced that £6.5 million will have to be made in “savings”, which many fear will entail job losses and course cuts. Figures obtained by the Student’s Union show that SOAS already spends over 6 times more on external relations and marketing than it does on its Africa department, a trend that is likely to continue if these cuts are implemented. 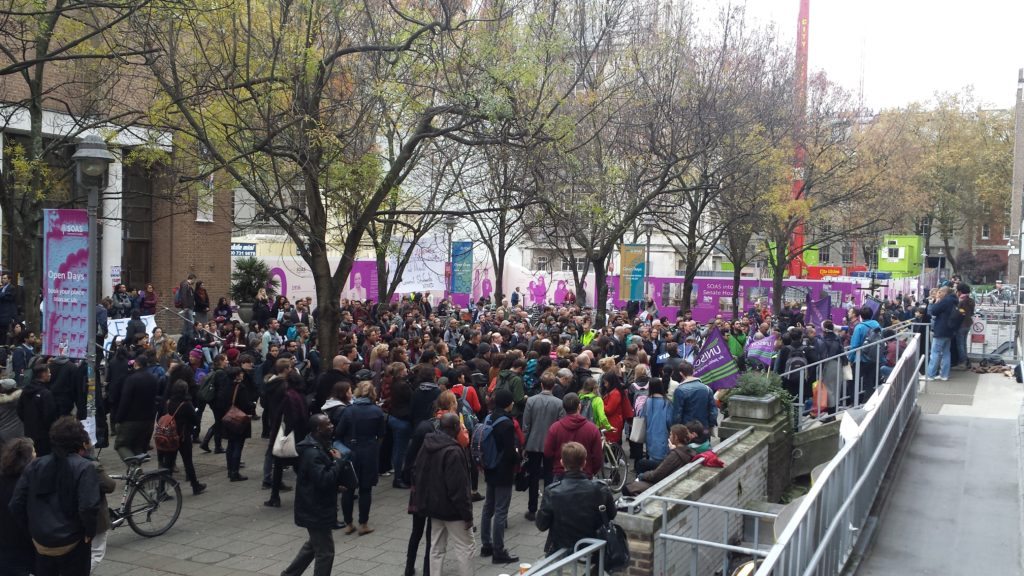 And so a month later, members of the SOAS community held an emergency rally on the steps of the small university in Bloomsbury. Tom King, the Student’s Union co-president, told the rally:

We have shut down this university today and that is incredible. I just have a message for Valerie Amos and senior management. How dare you?

The truth of it is that the cuts they are planning to make are not necessary, they are ideological. These cuts are not about reducing the deficit, they’re not about balancing the books. They’re about increasing the surplus SOAS is already making.

It seems that with every passing day the SOAS management is alienating itself more and more from its community of staff and students. The three main unions on campus, namely the Student’s Union, UCU and Unison, have all released statements expressing their solidarity with the occupation, messages that were repeated on Thursday by speakers at the rally. But this ongoing standoff is an unsustainable state of affairs. As one occupier told The Canary:

We don’t want this sort of division with management, we would like to see them as part of the SOAS community. Ultimately we would like them to treat us in a way that is respectful.

Over the course of the last few weeks the occupation at SOAS has become something of an umbrella for a number of different grassroots movements within SOAS, and in London more generally. The list of demands that were published by Occupy SOAS includes guarantees that there will be no job losses or course cuts. They also want an end to the outsourcing of cleaners and a democratisation of governance at SOAS.

These are all demands that have featured heavily on previous student-and-staff-led campaigns within the university. Occupy SOAS is also asking management to acknowledge the landslide victory of the BDS campaign, which was voted in a school-wide referendum earlier this year. The last demand is for a reversal of the School’s decision to implement the government’s Prevent programme, which is likely to arbitrarily target Muslim students on ideological allegations of “extremism”. 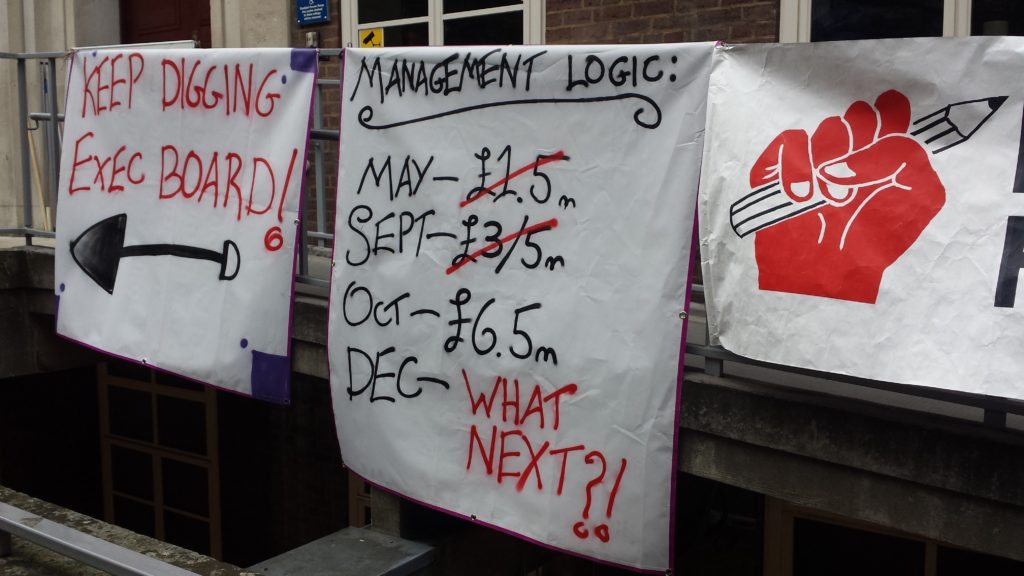 The general mood during Thursday’s rally was that students and staff will not be deterred. They will continue to oppose the marketisation of higher education, which has had a very negative impact on both workers and students. SOAS, with its tight-knit community of activists across the board, has responded to these time and time again with union-led campaigns and demonstrations.

Not to mention the introduction of tuition fees and this government’s plans to scrap maintenance grants, there has been a dramatic curtailment of workers’ rights at SOAS. Tutors and lecturers have been paid less than the London living wage for their work as ‘fractional’ staff, academic staff who are expected to do full-time work on a part-time contract. Cleaners and other support staff have been outsourced to private firms, denied sick pay and holiday pay, while the salaries of members of Senior management have soared across the country.

Compared to her predecessor Prof. Paul Webley, Baroness Amos has already been given a £100,000 pay rise, taking her salary to above £300,000. To then claim that SOAS needs to make millions of pounds worth in savings is an act of arrogance that is only matched by this country’s government.

A nation-wide demonstration against the marketisation of higher education is scheduled for next Wednesday. The march will start at the former headquarters of the now-defunct University of London Union (ULU), round the corner from SOAS. This occupation now stands at the forefront of the student movement, and by bringing together students, academics and non-academic staff, this has the potential to unite the university campus in a way that hasn’t been seen for some years.

The autonomous organisation of the SOAS occupation is far from an isolated case of committed student activism. Earlier in the year a similar occupation was held at LSE with very similar demands to the current one. Occupy LSE came to an end after six weeks of successful negotiations, but an important legacy that has since emerged is the formation of the Free University of London, a ‘collective and decentralised political project against the commodification and marketisation of education’. A radical, grassroots movement such as this one has the potential to endure beyond the necessarily short-lived context of student occupations, and can provide an alternative space for student communities to assemble outside of the bureaucratic machinery of neoliberal universities.

All photos credited to the author.