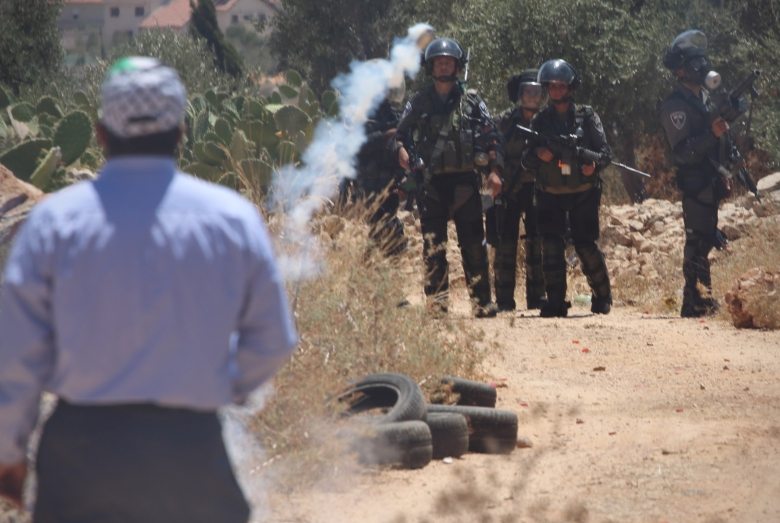 The current insurgency in Israel and the Occupied Territories has seen 66 Palestinians and 9 Israelis killed.

The imbalance in the death-toll has not raised as much suspicion about possible heavy-handedness by Israeli security forces as perhaps it should. A frequently-used explanation for Palestinian deaths is that the people who have been killed were attacking Israeli bystanders with knives, and so shooting them was the only way to stop them. This is accepted without much critical oversight. Developments in the last couple of days, however, may be about to change that perception.

The name ‘Isra’a Abed’ will probably not mean much to most people, but her story has laid bare the corrupt tendency of the Israeli police to ‘shoot first, invent cover story’ later. An apporach, that bares a striking resemblance to the current incidents with the US and British police. On 9 October, Isra’a, a 30-year-old mother-of-three, was at a bus station in Afula near her native town of Nazareth when she was surrounded by soldiers and police officers and gunned down. Miraculously, she survived the six bullets that were fired into her, but she was badly injured.

Bystanders at the scene recorded video footage of the incident on their cellphones (WARNING: Disturbing footage)

(A second video taken from inside a nearby bus can be seen via Twitter.)

After the incident, the Israeli police and army tried to justify the shooting by claiming that Isra’a was armed with a knife and that she had used it to attack a security guard. This explanation did not hold water for long. It very quickly emerged that the only person injured in the incident was Isra’a herself. No security guards at the bus station had any stab wounds to speak of.

The story from the police then began to mysteriously change. It was now claimed that Isra’a had unsuccessfully attempted to stab a security guard with the knife. Unfortunately, the video footage did not show any indication of a security guard standing anywhere near her. She was gunned down after a long period surrounded by men who had rifles trained on her, so that explanation was soon abandoned too.

Since then, the explanation has changed twice more; the second revision claims that Isra’a had motioned to stab an Israeli youth who was standing near to her. The video footage shows her standing near him, but not shaping to attack him at all. The third revision stated that she was not trying to attack anybody as such, but that she was ‘depressed’ and was trying to ‘induce’ or ‘provoke the police and soldiers’ into shooting her, an explanation that sounds even less plausible than previous versions. Why would someone with a conscious death-wish stand still and raise her hands in submission when soldiers have their rifles aimed at her? Would she not have challeneged her captors head on?

This constant shifting of narrative sounds eerily like US military behaviour after the destruction of a hospital in Afghanistan, does it not?

An investigation into the incident involving Isra’a by the Israeli Justice Ministry concluded yesterday that Isra’a had clearly not been guilty of attacking, attempting to attack, or even wishing to attack, anybody at Afula bus station that day. There is still no evidence that she even possessed the knife she was accused of waving around in a threatening manner. Middle East journalist Jonathan Cook argues quite reasonably that Isra’a did seem to have an object in her hand during the confrontation, but that it looked like a pair of sunglasses, not a weapon. There will be no charges pressed against the officers who shot her.

Worryingly, for days after the shooting, the Israeli press unquestioningly referred to Isra’a as a ‘thwarted stabber’ without really making sure of their facts. Many parts of the Israeli media have been routinely referring to stabbings by Palestinians as a daily occurrence of the insurgency, but it is time for them to reassess that.

As mentioned above, it has been noticeable that a lot of Palestinians, after being gunned down by police or soldiers, were accused of an attempted stabbing. While I am certainly not suggesting that none of these accusations are true, it is looking increasingly unlikely, given the details emerging from the incident in Afula. At the very least, the media has to start treating these claims from Israeli security forces with a lot more scepticism than they have to date.

The fact that stabbing attempts may have been a likely explanation in some cases has given Israeli secuirty forces an excessive license in every situation, making for a very effective excuse even when it is not true. Just consider Isra’a’s case; had it not been for the fact that bystanders happened to film the incident on their cellphones, she would almost certainly have been presumed guilty of attacking people with a knife.

Another incident of Israeli police brutality yesterday, this time the killing of Islam Ibeidu in Hebron, has been justified by the Israeli military in exactly the same way, that he was supposedly ‘neutralised after a stabbing attempt’. This claim has been contradicted by several eyewitnesses for the International Solidarity Movement (ISM), who insist that Ibeidu was unarmed when he was searched and that he was released and then shot without warning. ISM claim that a knife was planted on him after he had died.

Whether we wish to believe ISM’s version of events or not (should wishes ever play a role in making such judgements?), we have to consider their claims to be at least a possibility, especially in light of what happened to Isra’a Abed.

While not dismissing the idea entirely, when the ‘stabbing’ narrative is invoked by Israeli troops, the media must stop simply taking their word for it from now on.