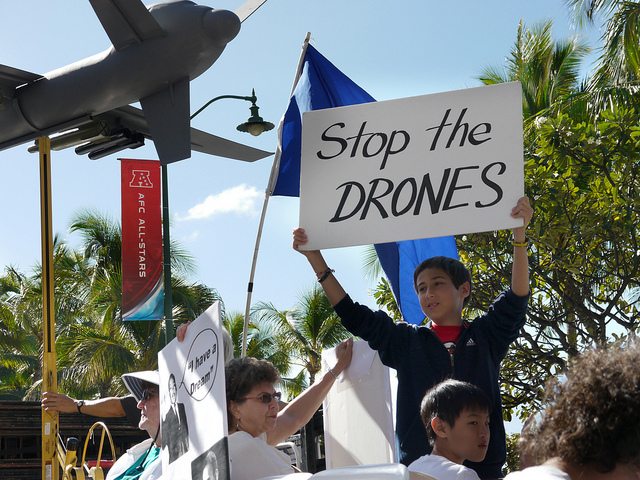 The Intercept has recently published an explosive report on a cache of secret documents they obtained about the US drone program in Afghanistan, Yemen and Somalia. In light of David Cameron’s recent commitment to double the UK drone fleet, and increase support for special forces, these reports should provide a stark warning to the UK.

Drone use has been a focal point of the Obama military strategy. He inherited a country with boots on the ground in both Afghanistan and Iraq, and drones provided an alternative to that more entrenched approach. They were initially received quite favourably by the public, who were fatigued by large scale military inventions.

They have also generally been a less visible weapon, seldom mentioned by officials until Obama’s speech on the subject in 2013. Moreover, they have been deployed at times as a part of covert operations, and used in undeclared war zones, such as Yemen and Somalia.

However, the Drone Papers obtained by The Intercept, detailing activity between 2011 and 2013, shine a stark light on this practice. They highlight the numerous challenges with UAV (Unmanned Aerial Vehicle) strikes, particularly in relation to accuracy.

One difficulty rests with the intelligence used to identify and track targets for strikes. In the contemporary arena, this information is heavily drawn from SIGNIT (signals intelligence) rather than the more traditional HUMINT (human intelligence). SIGNIT is electronic data – emails, calls, etc – used to decipher who might be a target and locate them.

As we are well aware from Edward Snowden’s revelations, the US and the UK collect vast amounts of electronic data from around the globe. However, this can be difficult to obtain in more remote areas like Somalia and Yemen. In such cases, reconnaissance missions using UAVs are necessary to carry out data collection and surveillance on potential targets.

According to the reports, these missions struggle to obtain sustained coverage in these areas, known as an ‘unblinking eye’, due in part to limited resources. ‘Blinking‘ – gaps in coverage – falls short of the ‘near certainty’ standard the US has set itself in areas outside of active hostilities.

Also, a significant amount of the SIGNIT used is provided by foreign intelligence outfits, according to the authors of the reports. On occasion, these foreign powers may have fed information to the US for their own ends, such as trying “to eliminate a domestic political opponent of the former dictator of Yemen for instance”, according to Jeremy Scahill, co-founder of The Intercept.

The whistleblower who provided the documents also concedes,

…there’s countless instances where I’ve come across intelligence that was faulty. It’s stunning the number of instances when selectors are misattributed to people.

The high number of non-target casualties in the strikes seems to support this assessment. One of the reports details Operation Haymaker in Afghanistan. Unlike in the undeclared battle zones of Yemen and Somalia, this operation did not suffer from the resource insufficiencies detailed above.

As a declared war zone, the US had special operations units, embedded intelligence and informants. Despite this, in one five month period of the operation almost nine out of ten people killed in air strikes were not the actual target. These people were often designated EKIA (Enemy Killed In Action) posthumously, which the whistleblower describes thus:

In the complex world of remote killing in remote locations, labelling the dead as “enemies” until proven otherwise is commonplace.

in case of doubt whether a person is a civilian, that person shall be considered a civilian

This standard is in place for good reason. Lifting the burden of proof from the perpetrator – the officials who ordered the strikes – could lead to the recording of fewer civilian casualties.

UK still has a choice

If there have been more civilian losses than an automatic EKIA designation would have us believe, this might shed light on some odd outcomes in the war on terror.

The war in Afghanistan has been waging for 14 years, and was purportedly initiated to destroy Al Qaeda and the Taliban. Despite this, the Taliban is currently stronger than ever. Perhaps more citizens are conceding to Taliban control due to losses from such strikes, or are too weary to resist them in the midst of multiple threats – the reasons are complex and unclear. What is crystal clear though is that Western efforts have failed in their stated aim.

This should give cause for a substantial review of these tactics, although that is unlikely in the US.

For the UK, these leaks should be seen as a sobering opportunity. With David Cameron announcing the UK’s first drone killing in Syria this summer – involving two British citizens – and a doubling of the drone fleet, it is obvious he is seeking to increase UK activity in drone warfare.

His commitment to increasing support for the Special Forces should also be greeted with caution. Special Operations personnel in the US were heavily involved in the activities detailed in The Intercept reports.

In light of these revelations, the UK needs to ask itself if we really want to follow the US down this path.