Jeremy Hunt was just torn to shreds, but not by who you'd expect - Canary Workers’ Co-op 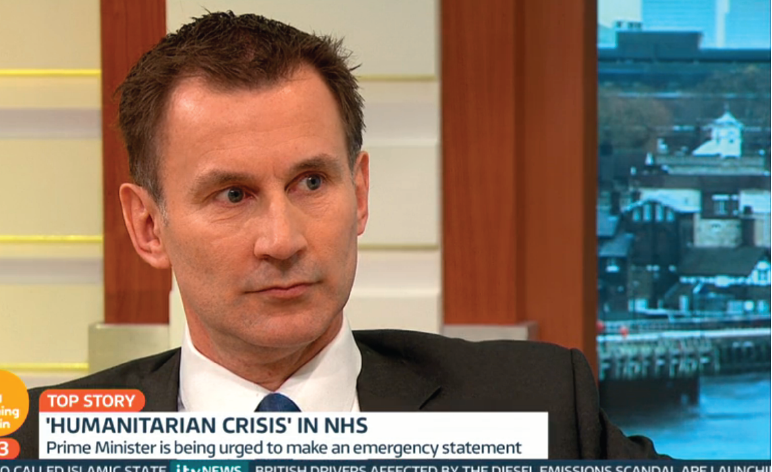 Jeremy Hunt has developed a reputation for not being available when serious questions need answering about the NHS. This reputation has been noticeable recently, with the NHS facing what the Red Cross has described as a ‘humanitarian crisis’. A crisis which has seen the British Red Cross transporting patients that the NHS has been unable to deal with. A crisis which has seen patients dying on trolleys in corridors. But Hunt has now returned to answer for these failings, and was a guest on Good Morning Britain. An appearance which saw him squirm under an unexpected scolding from the show’s co-host, Piers Morgan.

The confused politics of Piers Morgan

Piers Morgan has previously displayed characteristics which may suggest he’d give a Tory like Hunt an easy ride. He’s an unabashed friend and supporter of Donald Trump. He’s also no stranger to the sort of scandal that Hunt now finds himself in. Morgan was fired as editor of The Mirror for publishing ‘hoax’ photos of British soldiers abusing Iraqi prisoners, and also at times suggested that he used information gathered from phone hacking. At the same time, however, he is no stranger to dispelling the myth of the modern politician, and he’s spoken of his annoyance with them in the past. This was especially apparent in his questioning of Hunt:

In the interview, which is available on ITV, Morgan set out the scope of the problem:

Today’s papers make pretty grim reading if you’re the Health Secretary of this country. The Sun [points to front-page headline] “KILL BY MOUTH”. Two die in [the] NHS each day of thirst or starvation. We have The Red Cross saying we have a ‘humanitarian crisis’ in our NHS. We have the Worcestershire Royal Hospital, where apparently one person died last weekend from a cardiac arrest after waiting 35 hours on a trolley. A second had an aneurysm and died despite treatment after a similar period on a trolley.

He finished by suggesting:

This is going back to the Dark Ages. And you’re the Health Secretary of this country. How can this be happening in modern Britain? How can you have old people suffering from strokes sitting on trollies for 38 hours?

Hunt then attempted to defend himself:

Well these problems are totally unacceptable. This is the most difficult time of the [stutters] – for the NHS in the year. It always is difficult after the Christmas period when GPs surgeries aren’t open over the actual days of Christmas, and then they re-open, and then a lot of people get sent to hospital. The Tuesday after Christmas was the busiest day

Morgan pointed out that it’s always busy at this time of year. Hunt attempted to side-step this point:

It is. But the first thing I want to do is to thank NHS staff who are working incredibly hard

No they don’t. They don’t want to hear your thanks. They want to know what you’re going to do about it. Because you’ve got people dying on trolleys in British hospitals. We know Christmas is busy; it’s always busy. But you can’t have these people – elderly people suffering from strokes, dying of cardiac arrest… – [spending] nearly two days on a trolley.

Hunt denied that the NHS was in crisis. Morgan took issue with that claim:

You can’t just say there’s no crisis. 42 accident and emergency departments in this country diverted ambulances to other hospitals. That is double 2015 in the same period. Double!

Hunt attempted to use statistics to argue against there being a problem:

Well perhaps it would help if I told you what we’re doing about this. So this year, we are putting an extra £4bn into the NHS. Compared to last Christmas we have 3,000 more nurses, nearly 2,000 more doctors.

The problem is that the Department of Health (DoH) now has a reputation for using misleading statistics and statements. And it’s also disputed that the NHS is sufficiently funded or staffed.

When Hunt does appear to defend himself, it quickly becomes obvious why he spends long periods away from the public eye. Many people believe that the NHS is being mismanaged. It’s the Health Secretary’s job to suggest that, against all evidence to the contrary, the government is actually doing a good job. People may be able to turn a blind eye to his absence, but it’s much harder to swallow his mealy mouthed excuses.