Chaos at Harrods, as the dark side of Britain's luxury department store is revealed [IMAGES] - The Canary 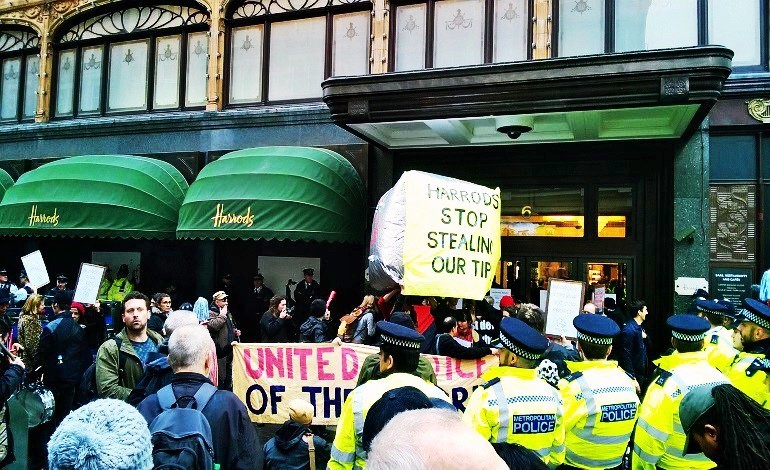 On Saturday 7 January, a group of demonstrators brought Knightsbridge in London to a standstill. They were protesting the treatment of staff by luxury department store Harrods. The protesters made some very serious accusations, surrounding the alleged ‘theft’ of millions of pounds in tips. And the police on the day also came under fire for what one protester called “over the top” policing.

Harrods refuses to say how much of its employees’ service charge it takes. It has already promised UVW that it will increase the share going to staff. But the union believes that staff should be getting 100%. It points out that Harrods does not exactly need the extra revenue. Qatar Holding, which owns the store, belongs to the Qatari Royal Family. One of the richest monarchies in the world.

Around 50 protesters descended on Harrods. People from UVW, Architects for Social Housing (ASH), and Class War demonstrated with banners, mops, and a giant inflatable cube: 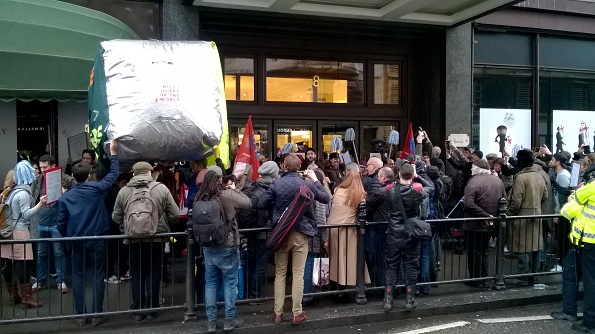 At one point, the protest moved onto Brompton Road directly outside Harrods, stopping the traffic in both directions: 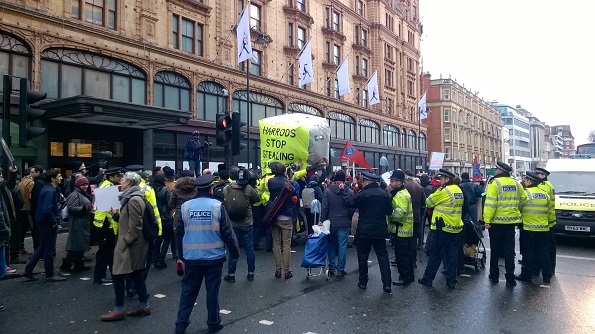 Speaking at the protest, Simon Elmer from ASH said:

[Harrods’] theft of up to £5,000 a year in tips from its hired staff, many of who are working on zero-hours contracts, many of who are being paid the minimum wage… is a microcosm of the class war that is driving London’s housing crisis. Which is being created by those who are going to benefit from it, financially and politically…

Private security staff, working for Harrods, were present outside the store. Although on several occasions protesters completely shut off Harrods’ main entrances, and security staff had to retreat inside. But it was the police presence on the day which to many, at times, seemed disproportionate.

The police: protecting who, exactly?

Around 15 officers were present at the beginning of the demonstration. But this soon increased to more than 30. And even more officers were also waiting on a side street. 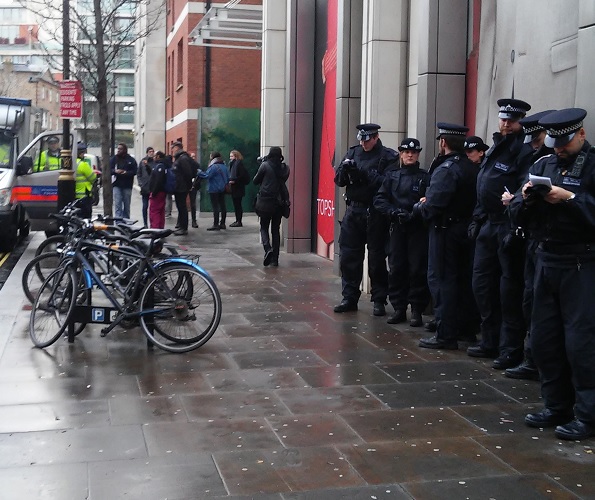 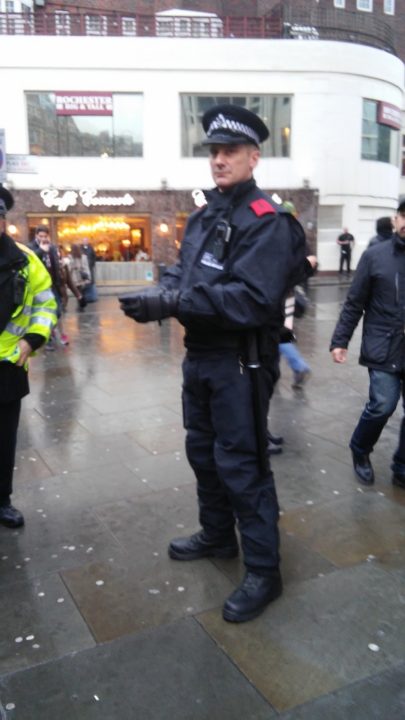 According to UVW, the police made eight arrests on Saturday. These included the union’s General Secretary, Petros Elia, who was released without charge, but on police bail pending further investigations. As part of his bail conditions, Elia is banned from going within 50m of Harrods. Elia wrote in a statement:

Despite there being not a shred of evidence against me I have been released on bail and prohibited from going within 50 metres of Harrods. The police have therefore temporarily banned me from representing members of UVW at Harrods or from protesting outside their store. This has all sorts of human rights implications.

The police would appear to be, once again, politically policing, and perhaps even acting, in this case, on behalf of the Qatar Royal Family, who owns Harrods and apparently even more of London than the Crown Estate, to stamp out United Vocies [sic] of the World’s unionisation of Harrods workers, most of whom are on poverty or very low wages, and get up to 75% of their tips stolen in the case of the 500 restaurant staff.

The Canary spoke to a protester, who wished to remain anonymous. They said:

Saturday’s demo at Harrods was an entirely peaceful protest. Lots of singing, dancing and some fantastic spontaneous mop waving. The crowd was very positive, and jovial.

The police presence was totally over the top. A green unmarked surveillance vehicle parked in the middle of the road and lots of police vans parked down all the side roads. The police were highly agitated, obnoxious and twitchy. They were unnecessarily pushing and shoving protesters. And the police made some very petty arrests. With two teams of police filming and shoving video cameras in everybody’s faces. Police aggression escalated to fever pitch when the ‘storm troopers’ [TSG] turned up.

And as the video below shows, several police officers seemingly manhandled an elderly man:

One seriously broken Britain: available to buy at Harrods

A spokeswoman for Harrods said it pays all of its staff “fairly and above the national living wage”. She added:

Harrods regularly revisits its policies to ensure that we best serve our employees and has been taking steps over recent months to review and improve the current system through which it distributes its service charge.

If the only high-end department store accused of fleecing its staff was Harrods, the problem may be slightly more palatable. But it’s not. Just last November, UVW were calling out the practices of John Lewis, which outsources its cleaning contract. The staff who work for the private firm within the store claim John Lewis treats them as “second class citizens”. And now, Harrods appears to be guilty of the same thing.

But Saturday’s protest highlighted two worrying things. Firstly, that the police appear to be continuing to crack down on public protests. Many people on Saturday suggested the Met’s response was disproportionate to the size, and nature, of the peaceful protest. In essence, police are using public money to protect private assets. Secondly, the divide between the richest and poorest in the UK appears to be worsening. When a store like Harrods, owned by one of the richest families in the world and charging up to £300 for a steak in its restaurants, can treat staff in the manner it does, there is something seriously wrong with the fabric of British society.

The Canary approached the police for comment, and will update the article if we receive a response.

– If you witnessed any arrests or police violence, please contact Green and Black Cross.

Featured image via The Canary, and additional images/footage via Nicola Jeffery/The Canary