These billboards are about to pop up all over Scotland, and the BBC will sh*t a brick [IMAGES] - Canary

Campaign group Inform Scotland is about to release a huge billboard campaign across Scotland, and the BBC will be less than pleased.

The pro-independence group describes itself as follows:

We are ordinary people, tired of the distortions of ‘news’ reporting on BBC Scotland where ‘spin’ and opinion have long replaced fact.

After two other billboard companies refused, ClearChannel agreed to run a revised version of the campaign: 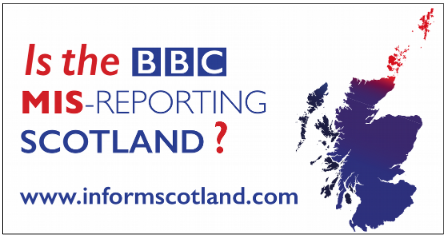 These billboards will first appear on Monday 16 January and run for two weeks across Scotland. As well as the static posters, advertising vans will be circling around major Scottish cities denoting the original campaign image: 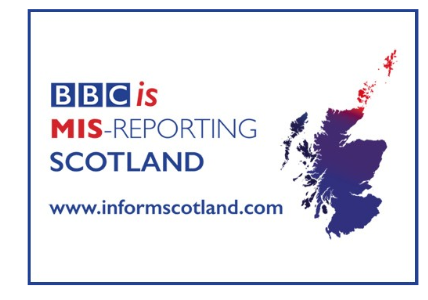 The posters are funded by a crowdfunder, which raised £9,000 in a week from other people also concerned with BBC coverage of Scotland. More than 400 people donated to the project in six days.

The campaign seeks to highlight the group’s website to people who cannot be reached through social media. The website hosts an array of articles claiming to document the BBC‘s misinformation during the independence referendum and on BBC Scotland in general. Additionally, the billboards will contain QR codes so people can use their mobiles to scan the code and access the site directly.

Is the BBC biased against independence?

Professor John Robertson recently retired as media professor at the University of the West of Scotland. Now, he is acting as spokesman for the campaign, saying:

And renowned US academic Noam Chomsky shares Robertson’s conception of mainstream media bias. Journalists are always biased to a degree because they must select which stories they cover. So BBC journalists who support the idea of a United Kingdom are not necessarily conspiring actively against Scottish independence. For professors Robertson and Chomsky, they are merely selecting and framing stories in a way which contributes to a worldview they subscribe to.

Robertson produced a content analysis of BBC coverage of the independence debate, which he says demonstrates coverage that has “not been fair or balanced”.

Monbiot cites Robert Peston, the BBC‘s economics editor at the time, who said in June 2014 that he found it “most frustrating” how BBC News:

is completely obsessed by the agenda set by newspapers.

This might help to explain why the BBC has attracted so many complaints of bias in favour of the no campaign.

Inform Scotland says two billboard companies refused to take on the campaign, despite there being “no legal reason” for them not to. JCDecaux said the billboards were “too controversial”, while PrimeSight refused “apparently because the BBC itself is one of their major customers”.

ClearChannel then agreed to run a revised version of the campaign, while the ad vans were fine with the original image.

The BBC bites back

The Herald reports that the BBC “strongly rejected” claims of bias against independence and launched a “thinly veiled” attack on:

those who would clearly like our journalism to pay deference to one particular political viewpoint or another.

Public service journalism exists to scrutinise and ask questions of those who are responsible for public policy decisions, while also doing the same for those who oppose them – no matter which political viewpoint they represent.

Because of the way we are funded we don’t, as some newspapers do, follow any particular political viewpoint – it is our responsibility to provide outlets for as many voices as possible as we strive to provide fair and impartial news coverage.

Reassuringly, audiences continue to tell us that the BBC is still the news provider they trust most, while we take heart from the fact that Reporting Scotland is by far the most watched news programme in Scotland with almost half a million viewers tuning in every night.

We therefore reject any suggestion that our coverage is partial.

But critics would argue that the BBC‘s own viewers are bound to think its impartial – that’s why they continue to use it as their main source of news. The campaign specifically targets the “significant minority” of people in Scotland who “trust the BBC as a publicly-funded broadcaster, and are quite unaware as to how they are being misled”.

From coverage of the Labour Party to Scottish independence, academic studies keep leaving the BBC‘s self-proclaimed reputation as an impartial outlet in tatters. Hopefully, this billboard campaign can spread awareness of these studies to those who need to see them the most.