While everyone's focused on May, no one is holding NHS chief Simon Stevens to account 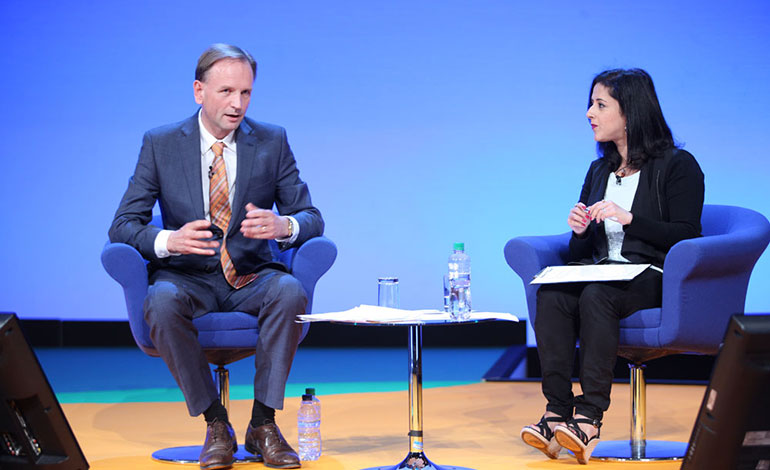 The NHS is at breaking point. There’s no denying it is massively underfunded. But that’s far from the only problem. And while the whole country fixates on holding Theresa May to account, the chief of the NHS is walking away scot-free.

In the first half of this week, more than 20 hospital trusts in England declared a black alert. The hospitals became so overcrowded they could no longer guarantee patient safety and had to cancel ‘non emergency’ services, including cancer operations.

Yet despite the gravity of the situation, May is still unwilling to acknowledge the problem. She stated:

we’ve all seen humanitarian crises from around the world and to use that description [in reference to The Red Cross] of a National Health Service, which last year saw two-and-a-half million more people treated in A&E than six years ago was irresponsible and overblown.

It’s not overblown to claim that the health service of a developed country is in crisis when patients (waiting for hospital beds) are dying.

With the crisis hitting the front pages, people are becoming aware of May’s failings. At Prime Minister’s Questions, Jeremy Corbyn accused her of being “in denial” over the challenges the NHS faces.

Likewise, the chief executive of NHS England, Simon Stevens, spoke out against May and contradicted the government’s claims that the NHS was given more money than it asked for. He stated:

But while the NHS is facing monstrous levels of under-funding, it is also facing innate mismanagement problems. And while everyone’s focused on May, Stevens is not being held to account for his own involvement.

Stevens’ past record suggests he is profit-driven and pro-privatisation.

Before becoming the chief executive of the NHS in 2014, Stevens worked in senior positions for the United HealthCare Group (UHC). And from 2001 to 2004, he was Tony Blair’s health policy adviser.

During his time at UHC, it was the subject of a class action lawsuit filed by the American Medical Association (AMA). The AMA claimed the company used faulty claims data to underpay doctors and overcharge patients. After a finding that patients had been victims of “consumer fraud”, UHC was forced to pay £285m in compensation.

Furthermore, as reported by Vice, during Stevens’ time as Blair’s health guru “the NHS handed over hospital buildings, along with their cleaning and catering staff, to private firms under ruinous ‘Private Finance Initiative’ deals”. These deals resulted in seven NHS trusts facing administration in 2012, as they struggled to repay large debts incurred under them.

Likewise, in 2011, Stevens became heavily involved in the Alliance for Healthcare Competitiveness (AHC). The AHC is a US healthcare lobby group which rallied for the Transatlantic Trade and Investment Partnership. It aimed to force state-run health systems to employ private health firms from the US.

Speaking on behalf of the Alliance For Healthcare in 2011, Stevens said:

The worldwide need for health care in ageing populations will lead to a demand for goods and services that can drive sales of American insurance, medical devices and record-keeping technology.

In the NHS, Stevens appears to have shown reckless management. In 2015, spending on temporary workers rose by £800m—a figure equivalent to the total NHS deficit. Likewise, pay for NHS temporary managers has soared to as much as £60,000 a month—the highest salary in the NHS on record.

While there is no denying that the NHS has suffered massive underfunding, we also need to look at who is running our NHS. With people like Stevens at the helm, any money we throw at the NHS will probably be squandered.