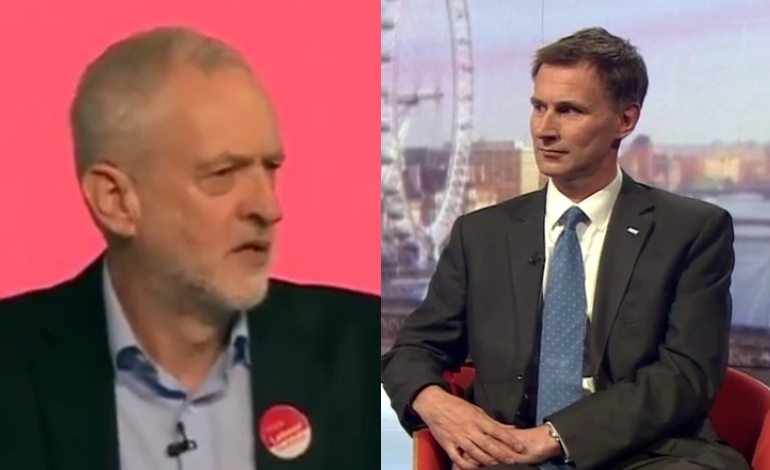 Health Secretary Jeremy Hunt appeared on The Andrew Marr Show on 7 May. And he used a common Tory trope to persuade viewers that the NHS is better off in his party’s hands.

But Labour leader Jeremy Corbyn crushed that argument in 10 seconds flat. And in doing so he raised what many see as the major reason why the Tories are a danger to the NHS.

A fact, however, that Andrew Marr failed to mention.

During the interview Hunt vowed:

We are absolutely committed to the NHS. We want to be the party of the NHS.

But one day earlier, Corbyn addressed a crowd in Leicester. And in his speech he said that the Labour Party is “under attack”. He listed the reasons why he believes that to be the case, including that “we’re standing up to the corporate interests plundering our NHS”. And then he explained how much of the NHS has already been ‘plundered’:

£13bn of NHS budgets is already privatised. How much more will be left if the Tories get another five years of damaging our NHS?

Corbyn was refering to the amount of money taxpayers now give to private companies each year to run parts of the health service. The total budget for the NHS in England in 2016/17 is £120bn. And it’s in England where most of the privatisation is occurring.

Instead of addressing this privatisation, however, Marr targeted Hunt’s record of failure in performance as Health Secretary. He forced Hunt to admit that the A&E waiting time standard of four hours hasn’t been met for two years under his watch. And he also made Hunt concede the NHS is failing to meet the 18-week standard for seeing people who need treatment. Some 370,000 people, according to Marr.

Nonetheless, Hunt insisted that under his guidance there were some successes:

Yet the increased capturing of our health service by private interests didn’t even get a mention on The Andrew Marr show. But it’s arguably a very important topic. Particularly because with the government’s most recent shake-up, these sell-offs are likely to increase.

The Tories introduced Sustainability and Transformation Plans (STPs) in 2016. These plans carve up the NHS into 44 regions, known as “footprints”. These “footprints”, or “networks”, have to create a “Five Year Forward View” that sets out how they will bring themselves into financial balance; aiming to find £22bn worth of savings.

But the creation of distinct ‘footprints’ could potentially see private providers gobbling up whole areas of the country. And make it increasingly difficult to bring the service back into public hands for future governments.

A nation at risk

That Marr didn’t raise the wholesale sell-off of the NHS’ services is scandalous. But Marr did quote the Royal College of Physicians (RCP) to Hunt. And the picture they paint of the NHS under Hunt’s watch is equally disgraceful:

Our NHS is under-funded, under-doctored and over-stretched. Patients are waiting longer on lists, on trolleys, in emergency departments and in their homes for the care they need. An increasing number of people, although clinically ready to go home, cannot safely leave hospital as the care system is unable to cope.

People’s lives are being put at risk.

Marr said this was a “very serious assessment” from the RCP. It is, however, also very serious that many deeply suspect the Tories are actively working to destroy the NHS and replace it with a private insurance based system.

That’s something the media and other politicians should confront the Tories on in the election campaign. Because the general public deserve to know that before going to the ballot box.