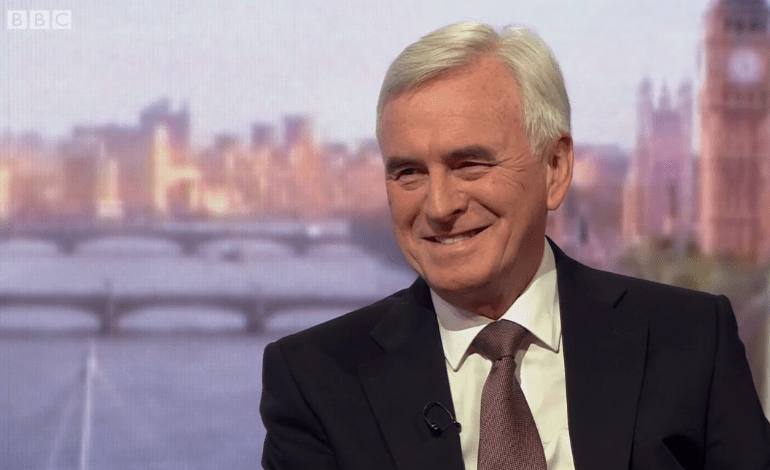 On the Andrew Marr Show, Shadow Chancellor John McDonnell laid out the bottom line in front of millions. A bottom line that the Conservative machine wants the electoral narrative to stay well away from:

Anyone earning below £80,000, we’ll be guaranteeing you will not have an increase in income tax or VAT, or national insurance contributions. And for those above £80,000, we’re asking them to pay a modest bit more to fund our public services.

The Labour Party has ruled out tax rises for the 95% of UK earners who earn less than £80,000 per year. And McDonnell says the party will use the “modest” tax hikes from those who earn more to fund our public services.

Public services, such as the NHS, rail infrastructure and social housing, are the backbone of the UK economy and facilitate economic growth.

Failing to properly invest in UK people and institutions raises national debt in the long-term. Indeed, for every £1 spent on flood defences, for example, the taxpayer saves £8 in reducing later economic damage. That’s why the Conservatives have proportionately piled on more public debt than every Labour government in history combined. Even the conservative International Monetary Fund (IMF) has admitted that austerity economics has brought dreadful results.

Many people would consider lower taxes the key reason to vote Tory. But Andrew Neil put that myth to bed on the BBC. Grilling the Conservative Party Chairman, he said:

How can we trust Labour?

Meanwhile, the Labour Party has pledged not raising taxes for 95% of UK earners. But how can Labour be trusted? Tony Blair’s rhetoric on privatisation, for example, didn’t match reality. As Richard Seymour wrote in The Guardian:

But there are many ways Labour has changed. Under Jeremy Corbyn, party funding comes mainly from the millions rather than the millionaires that bankrolled Blair. As a Labour insider said:

private donations from wealthy figures have failed to materialise

This is important because a party’s funding influences its policy. Former major Conservative donor Stuart Wheeler once insisted that “people who make large donations to political parties expect to gain influence and shape future policy”.

A Labour Party funded by the millions is much more likely to deliver for the majority of people. And Corbyn’s actions have matched his rhetoric throughout his political career.

On the Marr Show, McDonnell laid out the facts for the British people. If you’re one of the 95% who earns less than £80,000, you don’t need to chip in any more than you already do. But the higher-earners disproportionately benefiting from a society that depends on public infrastructure such as roads, firefighters, police and the NHS, will contribute a “modest” amount more. Don’t let the Tory machine distract from that bottom line.