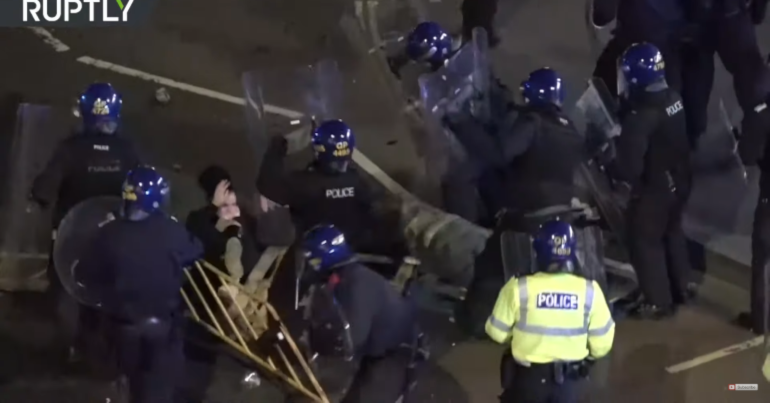 A jury at Bristol Crown Court was shown shocking footage of a line of police officers in riot gear knocking two people to the ground, repeatedly hitting them with riot shields, and kicking them. The footage was from Bristol’s 21 March Kill the Bill demonstration.

The incident can be seen from about six minutes and 20 seconds into the footage, taken by Russian news agency Ruptly.

The practice of striking people with the bottom of a rectangular riot shield is known as ‘blading’, and it was condemned in an All Party Parliamentary Group (APPG) report on the policing of the protests against the policing bill in Bristol and the Clapham vigil for Sarah Everard. The report describes some of the recorded use of blading in Bristol as “unjustified, entirely excessive” and possibly amounting to “criminal offences against the person“.

The video was shown as part of the defence’s cross-examination of a police witness on day two of the trial of Ryan Roberts.

Ryan is currently standing trial for riot, as well as for six charges relating to arson against police vehicles.

Ryan has pleaded not guilty to all charges.

The choice to close the public gallery is a direct violation of the legal system’s own concepts of ‘democracy’ and ‘justice’. It is an ideological attack on solidarity with Ryan, but also the solidarity with all prisoners and defendants within the court system.

On 26 October, however, supporters were allowed into the public gallery, which was soon packed out.

The first of many Bristol ‘riot’ trials

82 people have been arrested so far following the 21 March Kill the Bill demonstration in Bristol, and police are still looking to make more arrests. If convicted, protesters are facing long prison sentences.

Eight of those arrested have pleaded guilty so far. They’ve received sentences totalling 29 years in prison. But grassroots groups in Bristol have condemned the police violence against protesters on 21 March, and have said that they’re proud of the defendants for fighting back against the police.

Ryan – who has been on remand in HMP Horfield since March – is the first person from 21 March to have their case heard in front of a jury.

The prosecution open their case

The second day of the trial began with the prosecution opening its case to the jury. Video was shown of the Kill the Bill demonstration, which started at midday on 21 March at College Green, and of police officers warning participants that they were in breach of coronavirus (Covid-19) regulations for attending.

The 21 March Kill the Bill demonstration – against the authoritarian Police, Crime, Sentencing and Courts Bill – came during the UK’s strictest ever coronavirus lockdown, making protest against the bill much more difficult. It also happened against the backdrop of Sarah Everard’s murder by a serving Metropolitan Police officer.

If passed, the bill will give the police unprecedented draconian powers to arrest protesters, and it will criminalise trespass – effectively outlawing the livelihoods of the UK’s Gypsy, Roma, and Traveller communities. It will also give the courts increased sentencing powers to send young people to prison for longer.

The prosecutor in Ryan’s trial showed the jury a montage of footage of the crowd marching from College Green to Castle Park. Demonstrators chanted “Defund the Police” and “ACAB: All Cops are Bastards”. One video clip showed dialogue with a participant in the march who is asked what he thinks about the police. He replies, “well, just acab really innit!”.

The prosecution went on to play footage of a speech given at Castle Park. The speaker says:

there is one reason why we are here today, and that’s the encroachment of the police state into our lives

Calls are then made to take the demonstration to the police station.

The jury was then shown footage from early evening showing clashes between the police and protesters outside Bridewell Police Station. The prosecution video also revealed police in riot gear hitting protesters with batons, and deploying horses into the crowd.

Later on, the video showed police vehicles set on fire and the police station’s windows being smashed. Ryan is accused of taking part in all of this, together with many other demonstrators.

The most serious charges against Ryan are of ‘arson with intent to endanger life’ – with a maximum penalty of life imprisonment – for allegedly attempting to set fire to police vehicles while officers were inside.

Three police witnesses who were present on 21 March gave evidence: police constable (PC) Sean Oliver, who was part of a police evidence gathering team filming the protest; PC Mark Foster, the driver of a police vehicle which was ordered to retreat after a Mobile Police Unit was set on fire; and PC Mark Rogers, who donned riot gear when he arrived at Bridewell, and admitted striking protesters with his shield and a baton. They gave evidence about their experience of the evening, emphasising the alleged ‘violence’ directed at them by protesters.

There definitely wasn’t enough officers there to control the crowd, the crowd took control of us.

Detective constable Withey – the officer in charge of the case – estimated that the total damage caused to Bridewell Police Station amounted to £48k.

Cross-examination by the defence

After each officer gave evidence, they were cross-examined by Nicholas Lewin – the defence barrister acting for Ryan. Lewin pointed out to Withey that the video shows a sharp “escalation”:

a change in the behaviour of the police – we see riot shields coming out, batons used, horses used

Withey confirmed – under cross-examination – that police dogs had also been deployed, and that police officers had struck protesters with shields and batons.

When asked whether the police used violence against the demonstrators, Withey responded:

The two other officers also defended the police use of force against demonstrators.

PC Foster – an officer trained in ‘Public Support Unit’ (PSU) crowd control tactics – told the court under cross-examination that he thought the use of punches and kicks might be acceptable in some circumstances. He said that kicking someone on the ground could be acceptable, for example, “if the officer had their foot trapped”

But Foster conceded that “standing over” someone “and kicking down” – as the officers are seen to do in the Ruptly video – “wouldn’t be appropriate”.

Finally – just before the court was set to adjourn for the day – PC Rogers, the officer who had admitted striking protesters with his shield and baton, was shown the Ruptly footage. Lewin asked Rogers whether “striking someone on the ground with fists and shields” was part of the training for PSU officers. Rogers admitted:

that’s not part of the training, no

Support for the defendants

The whole proceedings on 27 October were watched by a packed public gallery of supporters.

After court had finished for the day a demonstration was held on the court step with chants of:

Kill the Bill defendants, you are not alone

The demonstrators then defiantly marched to Bridewell police station, the scene of the police violence on 21 March, amid chants of: