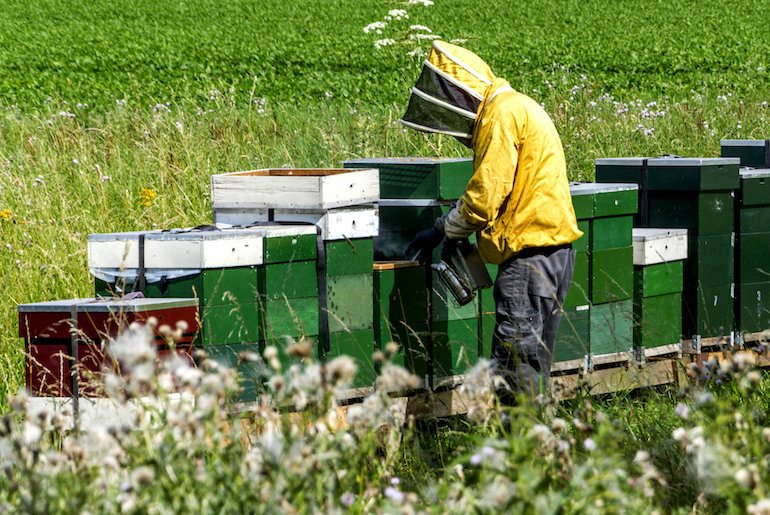 Imagine you’re a honeybee and you’re in trouble. You’re hungry and tired, and thousands of your bee pals are about to make a mass exodus. You’re buzzing like mad trying to signal your predicament, but nobody’s listening.

A new device can give advanced warning of a colony swarming or dying. The “Swarmonitor” tracks vibrations from inside a hive, which means beekeepers don’t need to disturb the bees to find out how they’re doing. Having this kind of early warning could help governments plan for swarms, deaths and epidemics that threaten food security.

For several years, honeybee colonies have suffered from mystery deaths, especially in the US, where billions of bees have died for no apparent reason. These deaths have been attributed to colony collapse disorder (CCD), which is threatening our food security. Scientists have studied this phenomenon and identified several contributing factors, including the use of neonicotinoid pesticides, poor quality food and habitat destruction.

Colonies have also been declining in Europe: according to the Swarmonitor team, there are 600,000 beekeepers in Europe, generating more than 400 million euros, but their number is decreasing “at an alarming rate.” We’re importing 20% more honey today than we were in 2001.

While scientists continue to investigate the causes of colony death, it’s important for beekeepers to monitor the health of the hives they manage to track the health of bee populations. Usually this means opening the hive and looking closely at the bees’ activity, which can disturb them and cause stress. Just think – if you were already in trouble and suddenly your safe home was open to the elements and predators, you probably wouldn’t want to stick around.

Swarmonitor is a small prototype device that listens to the vibrations bees make inside the hive and translates them, giving the beekeeper information about their activity without the need to open the hive. Dr. Martin Bencsik, one of the Swarmonitor creators from Nottingham Trent University, explained:

We want to develop a tool to find out the status of honeybee colonies – if the colony is starving, if there is a lot of foraging going on, or if the bees are preparing to swarm.

Bees vibrate at different frequencies depending on their mood; an experienced beekeeper can tell how the colony is feeling just by listening to the hum from the outside of the hive. The vibrations can signal whether the bees are actively foraging, calming down for winter or preparing to swarm. One of their signals is called the “begging signal” – a faint tooting sound scientists believe is connected to hunger.

The Swarmonitor is an ultra-high performance accelerometer that can measure these tiny vibrations. The team put two Swarmonitors into hives, one in the centre of the honeycomb and one seven centimetres lower. One was in a hive in the UK from July to November 2014, and the other in a hive in France, from April to October 2015.

The team analysed the signals every day and noted that the UK bees exhibited a decrease in signals as the colder months approached. They are presenting their results today at the 170th meeting of the Acoustical Society of America (ASA). In the summary of their presentation, the researchers note:

The results show long term trends in the begging signal statistics, a breakthrough in exploring seasonal variations in the honeybee vibrational language.

The scientists hope their device will help governments track epidemics in the long term, and let beekeepers “comfort themselves that their bees are okay and substantially reduce the need to visit them too often.” For us, this means we’ll have a better chance of tackling threats to our honeybee populations as soon as they emerge. For bees, it means someone’s finally listening.