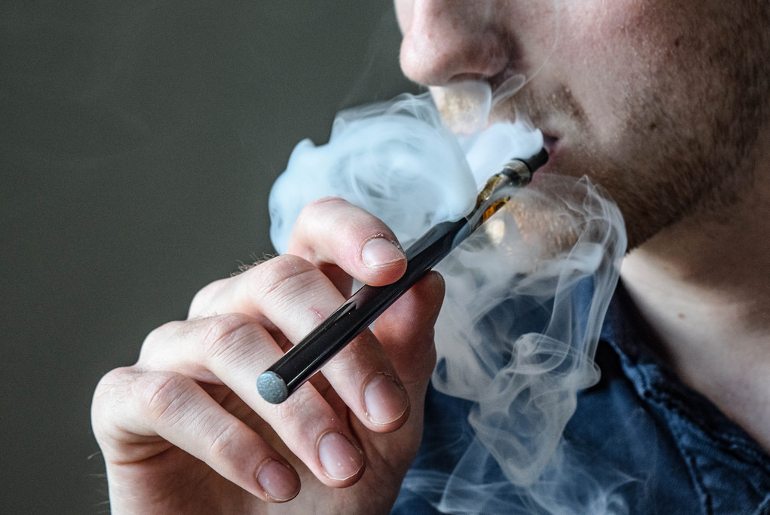 A groundbreaking study estimates that the use of e-cigarettes may have helped 18,000 people in England to quit smoking in 2015. The first study of its kind to look at e-cigarettes’ impact on the population of a country was carried out by researchers at the Health Behavioural Research Centre at University College London.

The new evidence contradicts concerns that increased use of e-cigarettes may be undermining people’s attempts to quit smoking. And quitting is still the best health advice for the 9.6 million smokers in the UK. A 40-year-old smoker can expect to gain nine extra years of life if they quit smoking.

Although tobacco use has fallen in recent years, it is still responsible for 96,000 deaths a year in the UK and is the leading preventable cause of cancer.

In the UK, it is estimated that 2.8 million people use e-cigarettes and they have become the most popular aid in quitting smoking. Professor Robert West, one of the authors of the study published in the British Medical Journal, said:

England is sometimes singled out as being too positive in its attitude to e-cigarettes. These data suggest that our relatively liberal regulation of e-cigarettes is probably justified.

The authors used data from the Smoking Toolkit Study, which collected monthly survey data from representative sample of adults. Data was collected on 43,000 smokers between 2006 and 2015. Information on NHS Stop Smoking Services was acquired from the NHS Information Service.

And it is the information from the NHS that shows the most effective way to quit smoking is through prescription medication and the use of local, and free, Stop Smoking Services. Someone using these services is around three times more likely to quit than if they had tried to quit without this support. Unfortunately, far fewer people take up these services (450,000 a year) when compared to those who use e-cigarettes.

Giving up smoking can be really tough. It’s important to remember that getting support from Stop Smoking Services is still the most effective way to quit.

The study provides evidence to support a positive association between the increased success rates of attempts to quit smoking and the increase in e-cigarette use in England. A number of influences that could affect the quit rate, such as stop smoking campaigns and rising tobacco prices, were factored in to the calculations. But this does not prove a causal link between the two.

Professor John Britton from the University of Nottingham welcomes the results, saying in a BMJ editorial:

successful quitting through substitution with electronic cigarettes is a likely contributor to the falling prevalence of smoking.

But he also adds a note of caution about potential factors, those unaccounted for and also those possibly measured, which may have influenced the results:

it therefore remains unclear whether, or by how much, the availability of e-cigarettes has influenced quitting behaviour in the UK

However, Britton notes that the continued decrease in smoking seen year after year:

indicates that something in UK tobacco control policy is working, and successful quitting through substitution with e-cigarettes is one likely major contributor. The challenge for public health is to embrace the potential of this new technology, and put it to full use.

One finding of the study may be of concern to the NHS and the officially sanctioned path to giving up smoking. The use of Nicotine Replacement Therapy (NRT) prescription treatments, such as nicotine patches, fell in those using e-cigarettes. The authors suggest this could be due to people choosing to use e-cigarettes, after not meeting with success when previously trying prescription NRT.

Evidence is also presented in the study that shows money spent on mass media campaigns to stop smoking is positively associated with the use of Stop Smoking Services. Cox is keen to build on the results gained in this study, saying:

We’ll continue to fund research into e-cigarettes to build our understanding, and encourage people to combine the most popular method with the most effective – Stop Smoking Services. But this study reassures us of the promise these products have.

The authors conclude that more research is needed for a full assessment of the impact of e-cigarettes on public health. They recommend that future studies should also assess the use of e-cigarettes in those that have never used conventional cigarettes before, and should also assess whether the recent decline in rates of people attempting to quit smoking is linked to reduced spending on stop smoking mass media campaigns.

– If you wish to give up smoking contact your local Stop Smoking Services.