Jeremy Corbyn annihilates Theresa May in under 30 seconds, with his strongest PMQs question yet [VIDEO] - Canary Workers’ Co-op 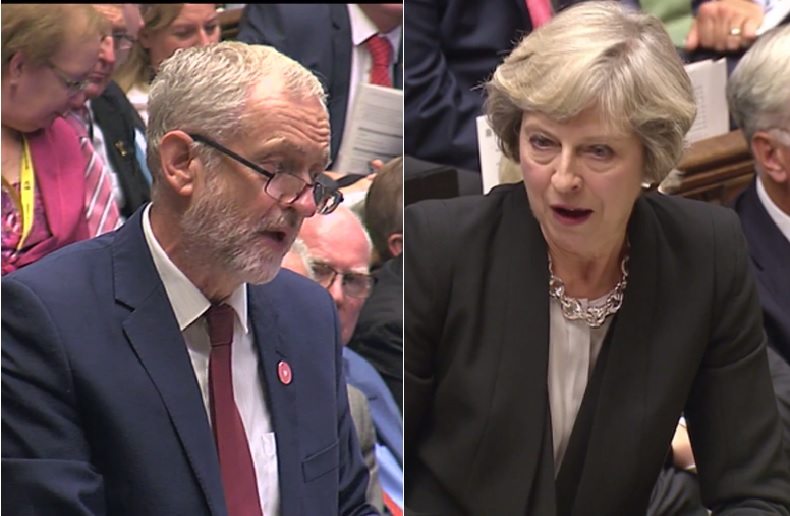 At Prime Minister’s Questions (PMQs) on 14 September, Jeremy Corbyn only needed one question to completely unravel Theresa May’s plan to open a new wave of grammar schools across the country.

And it was the Labour leader’s first question of the day:

Raising laughs from across the chamber, Corbyn asked:

I want to congratulate the Prime Minister. She has brought about unity, of Ofsted and the teaching unions. She has united former education secretaries on both sides of the house. She has truly brought about a new era of unity in education thinking. I wonder if it’s possible for her, this morning, within the quiet confines of this house, to name any educational experts that back her proposals on new grammar schools and more selection?

In response, the Prime Minister was unable to name a single expert who supports the introduction of new grammar schools. She began by championing “free schools and academies”, despite there being no proof that turning schools into academies boosts performance. In a similar vein, after failing to show any evidence backing new grammar schools, May finished with a volley of what appeared to be empty rhetoric:

What I want to see is more good school places. A diversity of provision of education in this country. So that we really see opportunity for all, and young people going as far as their talents will take them.

May was unable to pick up the pieces for the rest of the exchange. All wings of the political commentariat, usually hostile to Corbyn, recognised a win for the Labour leader. The Mirror’s Kevin Maguire tweeted:

Corbyn beat May at #PMQs. She was floundering, didn't have answers. And Cameron will be laughing his little socks off

Freelance writer for The Guardian and The Telegraph, Abi Wilkinson, wrote:

Good wk for JC poor for TM. She'll be glad of the party conference break. Political landscape will be totally different by next #PMQs in Oct

The BBC’s Political Editor Laura Kuenssberg has been repeatedly criticised for bias against the Labour leader. But today, she championed his performance:

Even Labour MPs who voted no-confidence in Corbyn hailed his victory.

Jeremy is thrashing the PM. There is just no evidence available for her to defend grammars policy #pmqs https://t.co/S8wBwILM1f

The staunchly Conservative Telegraph‘s verdict remained a clear win for Corbyn, stating the Labour leader “pummelled” May on grammar schools.

While intelligent children may do better at grammar schools, people who don’t get in tend to do worse than they would otherwise. Poorer children, meanwhile, including the brightest, are less likely to go to grammar schools – partly because wealthier parents can pay for private tutors to prepare for entrance tests, and partly because many of these schools tend to be in more affluent areas.

Educational achievement depends on a number of factors unrelated to the type of institution a child goes to. While environment and parenting have a big impact, so does the quality of teaching – something determined in large part by the freedom, training and resources that teaching professionals are given. With this in mind, the focus on grammar schools seems inappropriate to say the least – especially at a time when Britain has a shortage of school places, the highest rate of teachers leaving the profession in a decade, and over half a million pupils in super-sized classes.

Back at PMQs, the Prime Minister’s support for grammar schools came across as ideological. Whereas Corbyn’s opposition was backed by the evidence, experts and teachers themselves. Even staunch critics of Corbyn, like The Telegraph and the BBC’s Kuenssburg, awarded him a resounding victory. Along with a parliamentary report proving the Labour leader right on Libya (and Owen Smith wrong), this performance will give Corbyn a huge boost ahead of the leadership election.