Why one US Marine renounced war after 9/11 [OPINION] - Canary 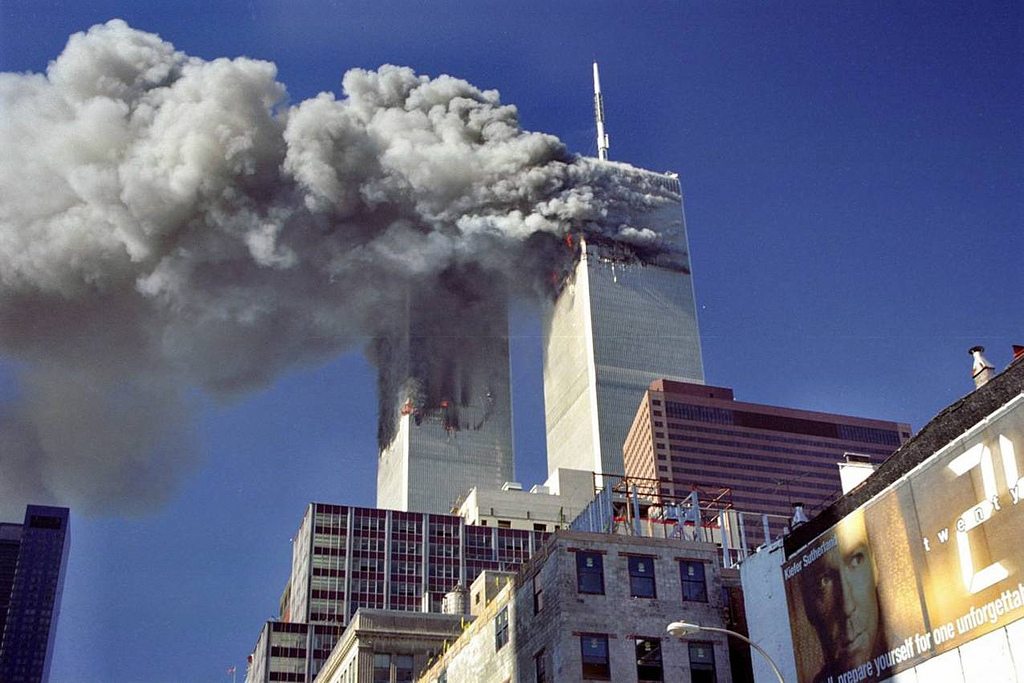 The fires which began with the 9/11 attacks were never extinguished. They continue to burn fiercely from Afghanistan to Iraq to Syria to Yemen to North Africa, as the region and its regimes came unglued in the wake of George W. Bush’s ‘war on terror’.

The 15th anniversary of 9/11 was marked in America with the usual sombre memorials and directives to ‘never forget‘.

But this definitive 9/11 slogan always takes me back to the overwhelming tide of pro-war fervour that swept the US and stifled any deeper reflection or debate in the years after 11 September 2001. Sadly, I was part of that fervour – and this too I will never forget.

The militarism of my youth

I joined the US Marine Corps as an idealistic 18-year-old in 2000, with a firm resolve – as I enthusiastically told my military recruiter shortly before leaving for boot camp – to “fight evil in the world”. This resolve was rooted more deeply in my veins after the 9/11 attacks. As a relatively new marine, I had temporarily worked at the Pentagon while attached to a headquarters computer programming unit in the two months just prior to that tragic day, and was fortunate not to be there when it was attacked.

After the smoke cleared in New York, Pennsylvania, and at the Pentagon, I and many others wanted ‘justice’ at all costs against an enemy we were told was present in multiple Middle Eastern countries. Slogans such as ‘let’s roll!’ echoed in my ears, and my fervour for ‘the mission’ influenced others to follow my path of military service.

While stationed in Quantico, outside of Washington DC, I became close friends with a local civilian nearing his high school graduation, and I encouraged him to join the Marine Corps. This occurred just as the Bush administration was making the case for war in Iraq.

While I remained at my headquarters unit in Virginia, my friend embarked on multiple tours of duty within a short two years as a marine infantryman. I remember even then being surprised and unsettled by how rapidly his overseas deployments came. He was killed by a suicide bomber in Iraq on his third deployment overseas prior to his twenty-first birthday. He had selflessly tried to stop a car laden with explosives as it sped into his checkpoint, possibly preventing more deaths among the nearby group of marines wounded in the attack.

Paul Wolfowitz, considered one of the chief architects of the Iraq War, attended my friend’s funeral at Arlington National Cemetery. More recently, Wolfowitz spent the 15th anniversary of the 9/11 attack on NBC’s Meet the Press shamelessly arguing that he and the Bush administration had done nothing wrong in selling the war and were honest with the American people.

Neither my friend nor I had ever really understood much about the place of his eventual death or the politics of the war. This had been clear during our brief visits together as we reconnected prior to what we didn’t know would be his final deployment to the Middle East. We were never encouraged to learn about the history of Iraq or the Arab world, or to ask too many questions for that matter.

“You’re either with us or against us” was enough for us to want to go out and “win hearts and minds” – a constant refrain in the post-9/11 atmosphere.

Exactly 15 years ago at 2:40 pm, Rumsfeld declared the US had to

As the power of such simple platitudes faded, I began to investigate for myself the history of US involvement in the region. My search began in the library of the Marine Corps University at MCB Quantico, and would later lead to my travelling to Syria after completion of active service.

Few Americans know of the absurd contradictions of our foreign policy in Iraq and other places over the past few decades, yet I soon found that many Iraqis and Syrians know the history well.

The United States, through covert support of the Iraqi Ba’ath Party in the 1960s and 1970s, sponsored Saddam Hussein’s rise to power as a way to combat perceived communist influence and populist national movements in the Middle East. Throughout that time, the CIA-supported Ba’ath engaged in ‘cleansing campaigns‘ which involved door-to-door death squads offing Washington’s enemies, based on questionable lists provided through covert liaisons.

Upon Hussein’s rise to the Iraqi presidency in 1979, and the increasing boldness of the Iranian Revolution, the United States encouraged Hussein to invade Iran, kick-starting the most devastating war in the region’s history. Most Americans still haven’t seen the easily accessible archive footage of Reagan’s then special envoy to the Middle East, Donald Rumsfeld (another architect of the 2003 Iraq regime change), shaking hands with Hussein in 1983, in what was clearly a warm and cordial visit.

Saddam would go on, during the course of a war that took over a million lives (1980-1988), to frequently employ chemical nerve agents against Iranian troop movements. Later into the war, this occurred with the assistance of the CIA and DIA (Defense Intelligence Agency). By the time of the 1988 gas attack against Kurdish citizens in Halabja, US covert assistance to Iraq’s military was established and routine.

And yet, Hussein soon became the new super-villain of the 1990s and the post-9/11 world. The very image of evil incarnate in the world. Even though his brutal dictatorial rule and regional aggression had undergone little change from when he was the CIA’s man in Baghdad. It was only American perceptions of him that changed.

The United States had helped to create the very monster it was telling young men and women to travel across the world to destroy in 2003. Ironically, one of the main justifications for going after the ‘evil tyrant’ offered by Bush was Hussein’s gassing of Halabja.

By the final year of my military contract, I felt I was learning too many uncomfortable truths. But ultimately, it was meeting families with roots in Iraq and Syria during social functions outside of military work that finally transformed my thinking. Military culture and the general pro-war atmosphere in America had warped me into thinking of Iraqis as ‘savage’ and ‘tribal’, according to the usual simplistic stereotypes.

But I saw very quickly that Arab people and others from the region tended to have a much more nuanced understanding of the world, reflecting its true complexities, than the average American. Looking back, it was these Arab-American friends (who gave predictions and warnings about what was to come of the US invasion of Iraq) who were proven exactly right. At the time, they were sneered at and ridiculed by most for daring to offer a contrary viewpoint, even though they knew the history of America’s prior destructive meddling in the Middle East quite well.

I remember that my friend who had died so young in Iraq said, during one our last conversations, that his heart had been warmed by his brief encounters with the Iraqi civilians he spoke to during his first tour. He saw hope in their faces. He soon redeployed to Iraq, still trusting that our leaders had it right.

My friend, like thousands of others among the US war dead, loved his country. But the architects and promoters of the war were playing the same cynical and deceitful game they’ve played for decades in the Middle East. The men that led us into war lost no friends, grieved no loved ones, and suffered no lasting consequences. They left government and went on book tours, headed up powerful global institutions, retired to comfortable jobs at think tanks, and continued to make millions – as war profiteers have always done.

My young friend is buried in the ground at Arlington Cemetery. Hundreds of thousands of Iraqi civilians are also long dead. And the region is still on fire.

During my last work day as an active duty member, I sat in an administrative room in Quantico with about 30 other marines about to receive ‘honorable discharge‘. Our final debriefing included having to sit through multiple presentations from representatives of major private contractor firms (or mercenary companies, similar to Blackwater/Academi).

They boasted of huge payouts to deploy to Afghanistan and Iraq in a private capacity, at a time when both countries were engulfed in chaos and ruin. There was a smug grin on each recruiter’s face.

It seems that almost every marine in the room flocked to the contractors’ tables after receiving official discharge papers. I walked past these mercenary recruitment tables in disgust, jumped in my packed-up car, and drove back to Texas as a civilian.

– Watch (free) the important documentary Leading to War which chronicles how the public was misled on Iraq.

– In the UK, join your local Stop the War Coalition to protest military aggression.