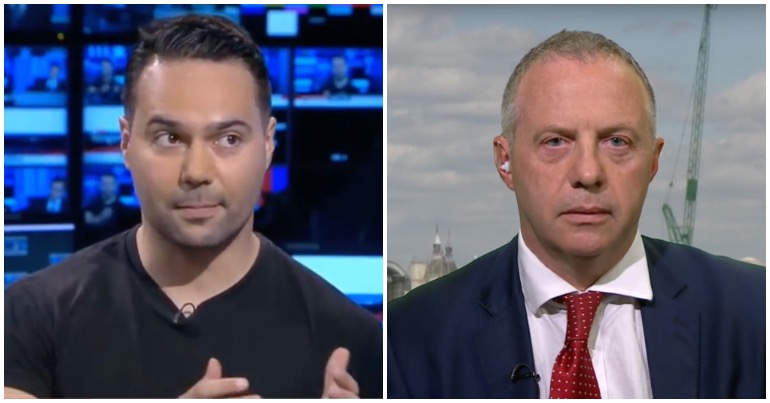 A British combat veteran has jumped to the defence of Novara Media’s Aaron Bastani, who has faced attacks from Labour right-wingers for daring to criticise the performance of the Royal British Legion (RBL) in dealing with homeless veterans.

But a British Armed Forces veteran spoke exclusively to The Canary about the comments from Mann and Watson, and he didn’t pull his punches.

Bastani discusses the RBL issues at length in an episode of Novara Media’s The Bastani Factor. But in summary, he tweeted:

If the British Legion can’t do that, & call for radical change, then it should disband, sell its assets & give the proceeds to those living on the streets

He also questioned the morality of RBL pay structures:

For saying the RBL isn’t particularly good at advancing the interests of veterans? You think it’s acceptable the director general of the RBL earns 140k while thousands are homeless?

But it was this tweet in particular that seemed to provoke the biggest backlash:

Absolutely sickening that as a country Britain spends £45 million on poppies to feel good and help a worthy cause while 13,000 ex veterans are homeless.

When was the last time the Royal British Legion challenged the government on homelessness and public services? Joke.

The political policing of poppies each year has now become a British tradition. And John Mann was one of the first to weigh in, doing so in characteristically brash fashion:

This ignorant man needs throwing out of the Labour Party today. https://t.co/2QcHWskdA7

Tom Watson was also quick off the mark:

I am proud of our Royal British Legion. They tirelessly work to support our Veterans. This man, who I understand has recently joined the Labour Party, does not speak for it. I’m sure all my colleagues will distance themselves from this appalling statement. https://t.co/Xb5h1is338

Watson seemed to take aim at Bastani not just for his views there, but also for being a relatively new member, invoking the deputy leader’s previous “desperate conspiracy theory” about ‘hard-left entryists‘ joining the party.

An army veteran speaks out

It didn’t take British army veteran Joe Glenton long to stand up for Bastani, though:

I''m a veteran. RBL isn't fit for purpose. As he says.

Many veterans – and non-veterans – are critical of the RBL. They are right to be.

Not least over it's increasing role as the marketing wing of the MOD.

Happy to discuss this further. https://t.co/O3UKK2zsFj

‘Gammon of the Somme’

Glenton, who served six years in the army, wrote in the Independent recently that:

It is that time of year when a vocal and presumably rather unfulfilled section of our society begin to fantasise openly that they not only fought but actually died at the Somme.

It is testament to the lamentable state of public debate in this country that what should be a sombre and thoughtful annual commemoration, during which we reflect on the glory-less truth of death in war, has become instead a carnival of dumb obedience where even the mildest critique is liable to be crushed under an avalanche of blood-drunk gammons.

Speaking to The Canary

The Canary asked Glenton for his thoughts on Mann and Watson’s comments. And his response speaks for itself:

It’s important to understand who they are and what their politics are. They both came into parliament in 2001. They’ve both been uncritical, or openly supportive of, Britain’s recent wars. They voted for those wars and were against investigations into those wars. You would think, given the amount of people – some of whom I know – who have died because they sent us to Afghanistan and Iraq, that it might give them a moment’s pause before they start wading in on the topic of people’s right to criticise the tone of remembrance.

Because what Bastani was really doing [with the RBL] was raising… a question of resources. Where do resources go if these organisations are so wealthy and there are 13,000 veterans on the streets?

What they are concerned about is whether they can recover the zombie politics of Blairism and it can takeover the Labour Party again.

The troops come to battle

But Glenton wasn’t alone in sticking his neck out for Bastani (who did a formidable job of defending himself):

You’ll need to show me in the rulebook where it says ‘don’t criticise the Royal British Legion’. Thanks. https://t.co/uC8Yhs93oC

For what? If we’re going to keep Tony Blair in the party even though he’s paid millions by murderous dictatorships then I think we can probably find space for someone expressing an opinion

I think criticising national institutions for national crises in their remit is a fair sight more aligned with the values of the Labour party than publicly shitting on a fellow member from a position of authority. The former is more relevant to notions of 'comradely' IMO.

Those who have done the most to put British servicepeople in harm’s way should think twice before they moralise and lecture about how to respect military sacrifice.

When around 13,000 veterans find themselves on the streets, the onus falls on both government and charity officials, past and present, to explain why.

People should not be publicly shamed for demanding real material change to alleviate the suffering of veterans.

Bastani put it best, “Remember the dead, fight for the living”.