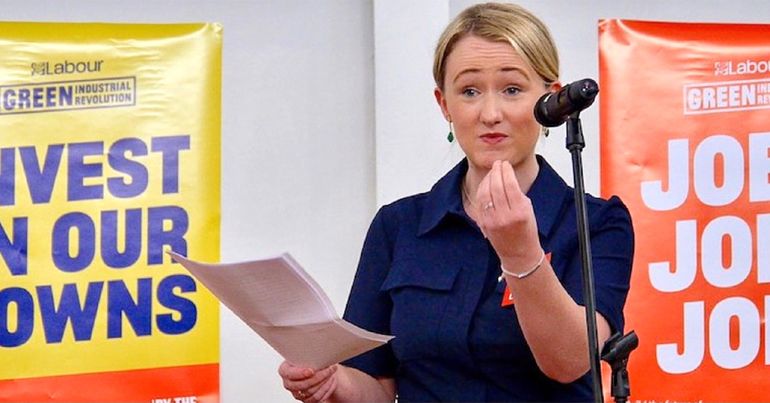 On 22 June, shadow ministers Rebecca Long-Bailey and Barry Gardiner spoke at a community event in Cornwall. They were there to launch Labour’s Green Industrial Revolution, a bold and radical plan to protect the environment, and also local jobs and the economy. Long-Bailey spoke to The Canary and discussed these plans in more detail.

“The overarching message of the Green Industrial Revolution is that now we’re facing a time of climate crisis”, said Long-Bailey. “If we don’t do something about it now and take radical action now, we’re not going to reverse climate change in the future”. She said “the important message” is:

It’s not just about tackling climate change. We’re actually using it as an economic opportunity to invest now, in things that have been underinvested for decades and transform economic opportunities. So… we’re showing people that they can have an exciting future where their kids will have work in the high tech industries of the future… It’s about creating hope. Moaning about how bad everything is just isn’t going to cut it for most people who’re worrying about making ends meet. The only way you can reach out…to create excitement… is to show people what the future can look like.

“A new form of democratic ownership”

One backbone of the Green Industrial Revolution proposal is to replace private energy monopolies and companies with publicly owned, democratic and locally devolved institutions. Long-Bailey explained that Labour plans to bring “the green networks into public ownership”. There are two important reasons for this:

One, we know that the network companies have been excessively overcharging for some time… that’s no secret. The second point is that the government’s own cost of energy review highlighted how these companies prioritise dividend extraction over investment in infrastructure.

She explained that Labour’s plan is to invest in “renewable generating projects”. This includes investment in electric vehicles and renewable energy. But as she also said, the current “grid networks” just aren’t ready for this. So, she explained, “we have to bring things back into public control”. But crucially, this isn’t the same model of nationalisation seen in the 1970s. Instead, this plan of “national energy agencies” is:

a new form of democratic ownership.

Under this model, current employees keep jobs “apart from the very senior directors”. Those jobs would be re-advertised because existing fat cat director’s salaries “fall foul of Labour’s 20:1 pay ratio rule”. The new agencies will be “democratic and accountable” and include representation from local communities. Long-Bailey explained that under this plan:

Everything is open and transparent. Nothing’s done behind closed doors.

“Divest… away from fossil fuels”

A key block to many efforts to confront climate breakdown is the power of fossil fuel-based multinationals like BP and Shell. Long-Bailey outlined that Labour already actively “encourages public pension funds to divest away” from some of these companies. Instead, it’s trying to encourage a culture of investment in “local, climate-friendly projects”. She explained that there’s a “whole campaign” to encourage local authorities to engage with this. For example:

We’re trying to get Manchester authority to do it…There’s big pressure to get parliament to divest its pension funds away from fossil fuels. So these are the things that can be done in the immediate time. And in the longer term John McDonnell’s team are looking at different measures to put in place.

“We’ll be pressuring them”

The UK is on track to host the UN’s annual climate change conference in 2020. Conference of the Parties (COP) is an intergovernmental body that meets every year to set and assess targets on climate action. Despite the seeming hypocrisy of the Conservative government’s bid to host COP26, Long-Bailey think’s it’s actually incredibly positive. She said:

It gives us an opportunity to press the government. Because it’s embarrassing, for them, to be rolling out [the] red carpet, given their track record on climate change and the fact that they’ve pulled most support available for new technologies. So, we’ll be pressuring them.

Labour allies and the “pantomime” of parliament

What shines through is the genuine camaraderie and warmth between the shadow ministers. So far, Labour doesn’t know if it will have a seat at the COP26 table. “I’m sure we’ll get invites won’t we Barry?” Long-Bailey asked her colleague. “Well you will, especially wearing that shirt.”

The Canary also asked Long-Bailey about her incredible performance at Prime Minister’s Questions (PMQs) on 5 June, and the brilliance of many women in the current shadow cabinet. As Gardiner quite rightly pointed out:

When she stands in that despatch box, she’s not a woman, she’s a politician… And she’s brilliant.

Long-Bailey noted that at that particular PMQs:

There were three Northern women sat next to each other… But that very rarely happens in parliament. But in terms of how it felt, you just block these things out. We’re so used to parliament being like a pantomime. And that’s one of the most embarrassing things about being a politician – going back to your constituents and then having conversations about that… That’s democracy in action, and how does that look to the rest of the country? And the rest of the world? To see people barracking each other like that as if they’re in some school playground… But you just try to block it out and you get on with the job in hand, try to ignore these silly people shouting things.

Long-Bailey really hopes that this culture will change. She said: “we’re in a very difficult place politically – in terms of the way people view politics and trust in politicians”. And, she continued:

For politicians to behave like that in Westminster, I think, creates even more distrust in the way they’re viewed in society. We should be viewed as professionals that are there putting forward the case for our constituents. Not screaming abuse at each other. That’s not professional. And if you did that in any other job, you wouldn’t be in that job any more. You’d be sacked.

Looking ahead, Long-Bailey has a clear message for Labour voters across the country in the face of ongoing smears and attacks from the corporate media. She said:

No one ever said that transforming the economy was going to be… easy. What we’ve faced in certain quarters of the media is a taster of what we’ll face when we’re in government. So I’d say to people – be strong. Because if we’re really going to transform our economy, and give our communities the future that they deserve, we’re going to have to be there, supporting each other, supporting Jeremy when he’s the prime minister and making sure that our message reaches out into our community. So they can understand what kind of future we’re going to give our communities.