Despite what they say in public, oil giants are continuing to block vital climate targets - Canary 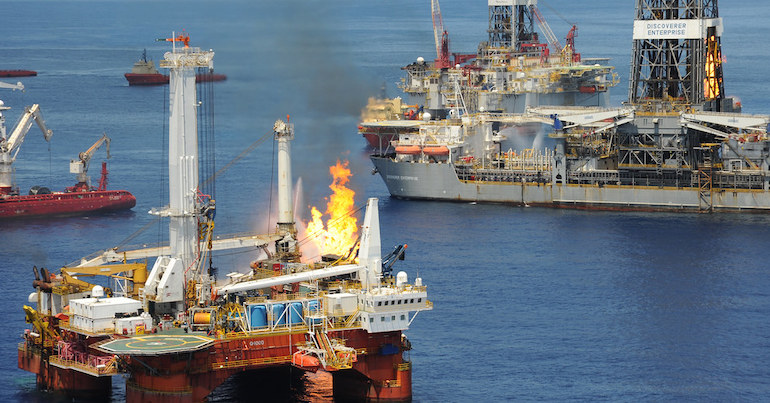 Global oil giants, including Shell and BP, won’t back urgent EU plans to tackle climate breakdown. Despite claiming to back Paris Agreement plans to reduce carbon emissions, oil multinationals dodged key questions ahead of an EU summit. This will propose a plan for an “EU-wide target of net zero emissions by 2050”. This vital step is urgently needed to limit climate catastrophe.

On 20 June, ahead of a vital European Council meeting, Unearthed reported that BP and Shell “declined” to back plans to eliminate emissions over the next 30 years. It noted:

The European Commission says the proposal, which would set an EU-wide target of net zero emissions by 2050, is needed if global warming is to be limited to 1.5 °C in line with the Paris climate change accord.

The current EU target is to reduce emissions by 80-95% by 2050. But in October 2018, the UN Intergovernmental Panel on Climate Change (IPCC) released a devastating climate report. This concluded that global warming must be kept to 1.5°C to limit the most severe effects of climate chaos. Reducing emissions to zero by 2050 is crucial to meet this target. Failing to do so “significantly” risks widespread “drought, floods, extreme heat, and poverty for hundreds of millions of people”. And as the IPCC report says:

As The Canary reported, we’re only one year away from the date set for governments to adopt the Paris Agreement fully. We need to achieve net zero emissions as soon as possible because time’s running out.

Ahead of the meeting, the European Commission sent out a consultation document. This contained a crucial question asking “whether the EU’s 2050 target should be kept the same, or be increased to achieve net zero”. BP, Shell, major Italian oil company Eni, and Spain’s Repsol refused to back net zero emissions by 2050.

BP and Shell have been barriers to climate action for years. All the science underlines the urgency of decarbonisation.  Yet these two fossil fuel dinosaurs are clinging to their out-dated and out-of-touch business models while the climate crisis worsens.

According to Unearthed: “Shell said that the company supported a net zero goal but would not give a date by which this should happen”. A spokesperson said:

Shell supports the European Commission Strategy for a Climate Neutral Europe, including a transition to reach net zero emissions in the EU aligned with the goals of the Paris Agreement.

Yet the Shell website says it “believes” that “the world” has until 2070 to achieve net zero emissions. It also insists that “the world is likely to be using 50% more energy by 2070”.

A BP spokesman said the company supports a carbon neutral future “in the decades to come”. But again, its website states that the record 2% rise in carbon emissions in 2018, is a “direct consequence of the increase in energy demand”.

Climate action can only come if the key fossil fuel multinationals adapt and transform their business models. For example, by fully supporting renewable energy. But given their multi-billion-pound profits from fossil fuels, their resistance to respond to this crucial question raises serious questions.

AFP‘s global science and environment correspondent also pointed out the links between global oil company profits and contribution to emissions:

Companies' contribution to greenhouse gas emissions since 1988 (and profit 2018 in billions):

What are they doing at UN #climate talks? https://t.co/ecqwIPP5Cy

“We are running out of time”

The impact of climate breakdown is becoming increasingly visible. So far, 2019 has already witnessed extreme weather such as the devastating cyclone Idai, regarded as one of the deadliest storms on record in the southern hemisphere. Around the world, biodiversity is under alarming threat, and carbon dioxide levels have reached historic highs.
As sixteen-year-old Greta Thunberg told the UN in 2018: “We have run out of excuses, and we are running out of time”. This EU target may be ambitious, but it’s vital to protect our planet for future generations. We must take action against these major oil companies to insist they protect the planet over their profits.
Featured image via Flickr – U.S. Department of Defense