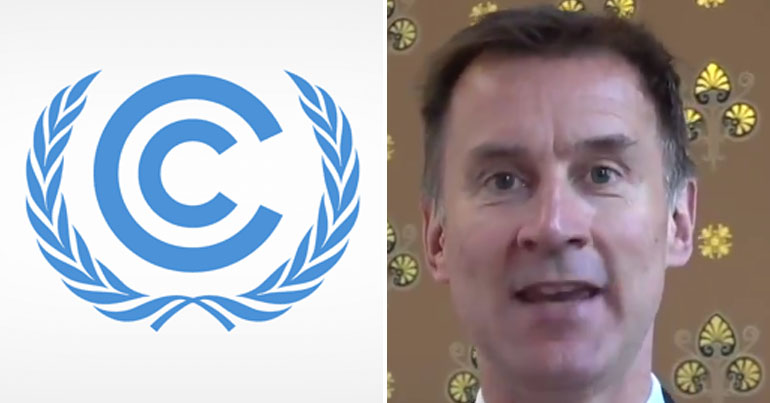 The UK is on track to host the UN’s annual climate change conference in 2020. In a public statement on the bid, the government said the UK is “at the forefront” of climate action. But environmentalists met this claim with disbelief.

Conference of the Parties (COP) is an intergovernmental body that sets and assesses targets on climate action. COP meets once a year, hosted by one of its state members. On 18 June, the UK publicly launched its proposal to co-lead COP26 with Italy. It said that the UK would host the main conference in 2020 while Italy would host pre-COP events including a “significant ‘youth event'”. The statement also claimed that:

The United Kingdom and Italy are at the forefront of driving ambitious climate action.

Although the bid isn’t yet confirmed, a senior source said that it’s highly likely to be supported by other COP members.

Recent events have put the UK’s commitment to climate action in the spotlight.

On 18 June, for example, the same day that the government launched its COP26 bid, Heathrow airport published its plans for expansion. The proposals faced criticism for being out of step with the UK’s climate goals. And the government’s ongoing refusal to outlaw fracking also puts parliament’s declaration of a climate emergency into question. The government can’t even decide whether it should halt the opening of new coal mines. Furthermore, human activity in the UK has also caused huge drops in its biodiversity, which is crucial to health of the climate. And it has a history of funding highly damaging fossil fuel development in other countries.

As a result, some have said the UK isn’t fit to host COP26 in its current state. Green MP Caroline Lucas, for example, gave five areas where the country needs to “get our own house in order” before hosting the event:

To be perfect hosts, we should get our own climate house in order by

This is a major opportunity for the UK to show international leadership, but if we are to credibly provide the world a platform to tackle the climate crisis, we must also make sure we are walking the talk here at home. By then, we must show that the UK is matching its ambition with real action. Our next Prime Minister needs to make responding to the climate and environment emergency – and delivering on our net zero targets – an immediate policy priority across government.

COP26 is seen as a crucial event because a number of important climate targets come together in 2020. As the BBC pointed out, it’s the year when promises on curbing emissions are due for review and financial aid from developed countries ought to come to fruition. And the Guardian said 2020 is widely seen as the year that governments must fully adopt the Paris Agreement. 2020 is also just a decade away from a hard limit for serious action on climate breakdown.

In his video announcing the bid, foreign secretary Jeremy Hunt gave key reasons why the UK should host the important event. He said the UK has “cut emissions more than any other country in the G20”. While technically true, it masks the reality of the data. PwC, which is the source of Hunt’s claim, in fact, said that “not one of the G20 countries” is on track to effectively reduce carbon emissions.

No countries are doing enough to slow climate breakdown. But it’s hard to believe the UK government has the gall to believe it can lead anyone else given its own duplicity and inaction on the climate.