It's official. Governments and businesses are trashing 100 years of progress. - Canary 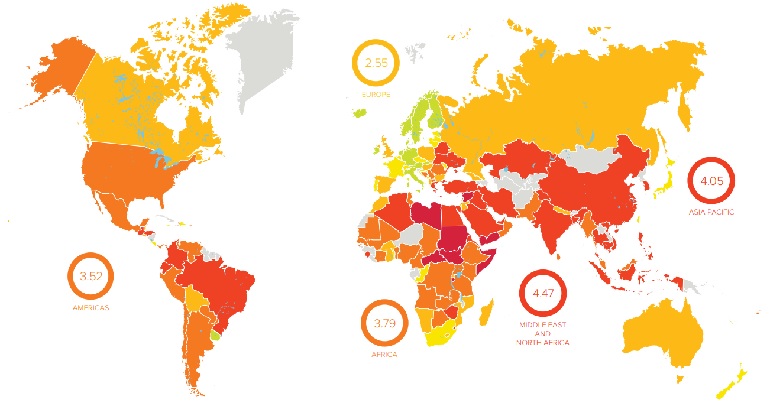 On 19 June, the International Trade Union Confederation (ITUC) released its 2019 Global Rights Index. This report reveals a worrying situation for working people around the world. And it’s a situation that seems to be getting worse.

The ITUC “represents 207 million workers in 163 countries and territories”. And its annual index looks at 145 countries to see how well they’re protecting workers’ rights.

Launching the 2019 index, ITUC general secretary Sharan Burrow was scathing about the current situation. She warned that governments around the world “are attempting to silence the age of anger by constraining freedom of speech and assembly”. And she highlighted that the “number of countries which exclude workers from the right to establish or join a trade union [increased] from 92 in 2018 to 107 in 2019”. She also stressed that:

The greatest increase took place in Europe where 50% of countries now exclude groups of workers from the law, up from 20% in 2018.

Decent work is being affected and rights are being denied by companies avoiding rules and regulations.

The worst offenders are Western allies

As The Canary reported upon the release of the 2018 index, the worst offenders in the world regularly include key Western allies; countries like Saudi Arabia, Turkey, and Colombia. And the same is true in 2019: 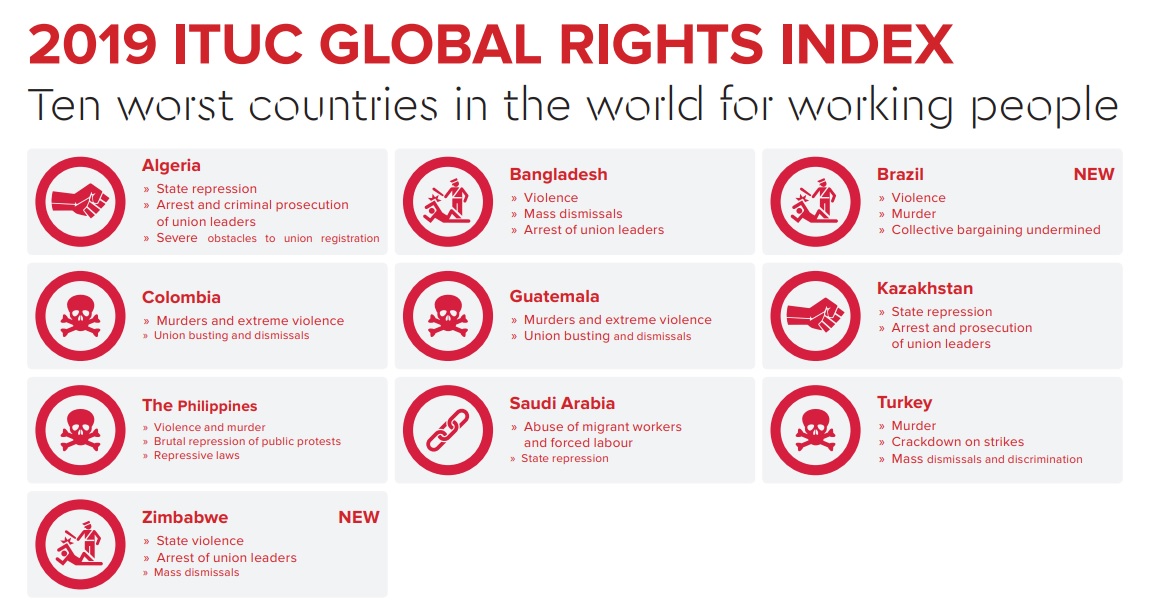 As the ITUC pointed out:

in Colombia alone, 34 trade unionists were murdered in 2018 – a dramatic rise from 15 in the previous year.

‘Democracy is in crisis, and peace is at risk’

Two key global trends that the ITUC identified are that “democracy is in crisis” and that “governments are attempting to silence the age of anger through brutal repression”. And it stressed that:

Indeed, its figures show a very worrying situation. And it seems to be getting worse:

Burrow previously insisted that “recent decades of corporate globalisation have destroyed” the International Labour Organization’s (ILO) 1919 vision of a “social contract”. The aim of this contract was to ensure the “social and economic conditions which would guarantee prosperity and peace”. But in reality, Burrow said, that hasn’t happened. Instead, the current system has “brought the world to the brink of environmental destruction and left billions of people behind”.

For that reason, the ITUC is demanding a “new social contract”. An ITUC petition, for example, called for the ILO to declare openly its support for workers’ rights. That would mean backing “fairer wages”, “more oversight” of bosses, and “building justice into the climate and technology transition”.

Burrow reasserted this message upon the release of the 2019 index. A new social contract “between workers, governments and business”, she stressed, is essential “to rebuild trust as people lose faith in democracies”.

Speaking to The Canary about the role the media has to play in standing up for workers’ rights, Burrow said:

There are brave investigative journalists who uncover and expose corporate abuses of human rights activists and workers. And independent media like The Canary and The Guardian continue to break those important news stories.

There is some hope, though. As Burrow stressed:

Corporate greed may be global, but workers’ actions are unified on a scale not seen before.

She explained, for example, how “companies who have systematically attacked workers’ rights now face global protests”. In particular, she mentioned strikes and other battles facing Uber, Amazon, and Ryanair. She also highlighted that “years of campaigning” by workers and union activists had forced the Irish government “to ban zero hours contracts”. And she mentioned how the government in New Zealand “has continued to repeal regressive labour laws” and strengthen workers’ rights.

So yes, the world’s currently a very hostile place for workers to organise. But when they do unite, they have a real chance of improving their conditions. And they can play a leading role in the resistance to government and corporate abuses.

Featured image via ITUC, with permission