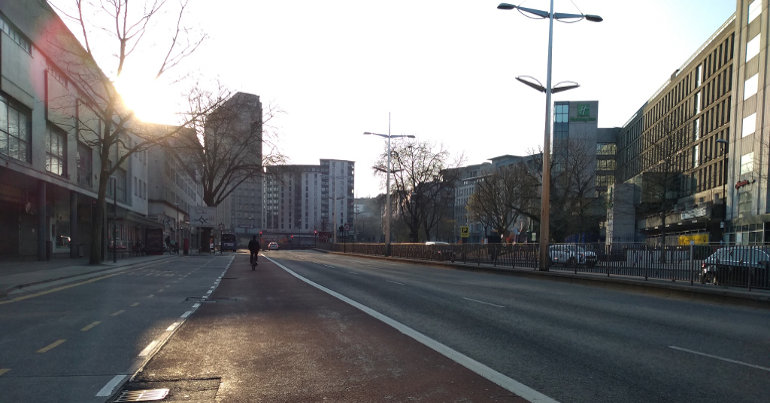 Over the last few weeks of the coronavirus (Covid-19) lockdown some of us have been working from home, or have been unable to do our usual jobs.

But many others have been working as usual, despite the risk of coronavirus infection. NHS workers and carers have been celebrated in the media as heroes. But it’s not just health workers who are still at work: couriers, post-office staff, transport workers, and people involved in the food supply chain are all still working too.

This exclusive Canary interview looks at how some of them are being treated. Sam (not their real name) has been a delivery rider for Deliveroo and UberEats in a major UK city for roughly two years.

Less than the minimum wage

We asked Sam about their wages as a delivery rider. Sam explained that the self-employed pay they receive from Deliveroo and UberEats is equivalent to less than the UK minimum wage.

Sam told us that their pay has been less than the minimum wage since the start of the coronavirus pandemic. And, as a zero-hour worker, they are paid no holiday pay or sick pay. Sam told The Canary:

Bear in mind we are self-employed contractors so that means [our wage] includes holiday pay and sick pay… It includes tax that we have to pay on it when we submit our tax return.

It’s not a living wage at all.

In contrast to these paltry wages, Deliveroo has expanded massively recently, doubling the size of its operations in 2019 and generating £476m in sales.

“Less than a pound an hour”

The companies and the government need to act now to ensure that these workers are given basic rights and are paid at least a living wage.

Uber’s share price has risen since the coronavirus crisis began. The company has benefitted from the increased demand for deliveries from restaurants in some countries.

But in the UK, work has been drying up during the lockdown, and workers on zero-hours contracts are struggling. According to Marshall from the IWGB:

Food delivery couriers working for Deliveroo, UberEats and Stuart, who were already facing poverty wages before the pandemic, are now being driven to destitution, as demand has completely dried up across the UK. Couriers get paid per delivery and as most restaurants have shut their doors, riders aren’t earning. This is a major social crisis that isn’t showing up in the unemployment figures.

In fact, a spokesperson from the IWGB told The Canary that Deliveroo and UberEats riders “are telling us that they are often earning less than a pound an hour” because of the drop in demand.

The Canary contacted Deliveroo about conditions for its riders during the pandemic. According to its spokesperson:

But Sam tells a different story:

Deliveroo have set up a ‘rider fund’ for if you’re sick. But you can only apply for it [if you can prove you have] coronavirus, and obviously for most people that’s not going to be possible because you have to have a test, go to the doctor and so on [which isn’t possible].

It’s also quite difficult to access [the ‘rider fund’]… you have to have completed a certain number of orders within the previous 6 weeks… many people have [not] been able to access it.

“If you get sick from anything else that goes wrong,” Sam explained, “like a broken leg, you can’t get any sick pay from either Deliveroo or Uber“. The only option for many workers is to apply for “the government’s statutory sick pay or universal credit”.

The IWGB is demanding that employers like Deliveroo pay for time off and sick pay for workers who “would be willing and able to work but for coronavirus issues“. The union is demanding that this pay be based on how much workers earned on average during the past three months.

I don’t feel like they’re taking our safety seriously at all. Despite [four weeks of] the pandemic lockdown…  and we’ve known about the coronavirus for much longer than that – they haven’t provided [me] with any hand sanitiser, gloves, or face masks.

I’ve been [paying for] hand sanitiser out of my own pocket.

Sam told us Deliveroo had offered to reimburse up to £20 for “hand sanitiser and hygiene equipment”. But when the company received the receipt, it refused to reimburse the payment, saying that it was not invoiced correctly. An email said that its decision not to reimburse ‘was final’.

Both Deliveroo and UberEats have said that they plan to deliver hand sanitiser to riders. But Sam has not received any yet.

The Canary contacted Uber for a comment, but we had not received a reply by the time of publication.

Deliveroo sent the following statement to The Canary:

Since the outbreak of COVID-19, our dedicated rider support team has provided constant advice on how to stay safe, as well as expert hygiene guidance to our riders.

But Sam says that the company’s approach has been hostile rather than supportive:

We’ve received a lot of hostile messages from Deliveroo saying our supplier agreement will be terminated if we don’t observe social distancing.

Workers like Sam, who are keeping the food supply chain running, deserve recognition for carrying on working during the lockdown. According to Sam:

To be honest, I enjoy working outside. It allows me to go out and about, get my exercise and to earn money. So I don’t want to complain too much about that and at least I’ve got the opportunity to work, which is more than a lot of people have.

[But] I feel like the government is encouraging people to use the [services we provide]. That’s the messaging that’s coming out of the government in this crisis– including from Boris Johnson. At the same time there’s no recognition, I don’t think, that the people that are doing these jobs are putting themselves at further risk [of infection].

Recognition for workers like Sam shouldn’t just be empty words. They deserve to be properly paid to reflect the level of risk they are taking. Sam suggested:

I think a good way of recognising that could be [for example] giving us hazard pay and so on. Or just adding an extra £1 an hour to our pay

“We should be adequately compensated”

I think there should be some recognition that low paid menial work is more risky now – actually it always has been – and we should be adequately compensated for that risk.

“People appreciate us even though our bosses clearly don’t”

Since the coronavirus lockdown began, thousands of mutual aid groups have been set up to support people self isolating. Sam sees supporting workers as part of the same process of mutual aid:

I volunteer, on the side, for the Acorn [community union], doing shopping for people and picking-up prescriptions for them. I know a lot of other Deliveroo riders are also doing that sort of thing as well.

We all consume food, and that food is probably packaged by someone on a zero-hours contract. I think it is important to see those links and see just how capitalism operates. We are all using and exploiting zero-hours workers, whether we know about it or not. Deliveroo and Uber are quite well known because they’re visible. I think what would be useful would be if we Deliveroo and Uber riders made links with zero-hours workers packing for Tesco [for example]. Because it’s all part of this huge exploitative network where people aren’t adequately protected.

But what capitalism does is try to separate us and divide us, so that we don’t act in solidarity with each other.

Refuse to be divided

The mutual aid response to coronavirus shouldn’t just be about doing shopping for our neighbours who are self isolating. Like Sam says, it should be about looking after the needs of the whole community. That should include supporting workers who are taking risks to keep the food supply system working, and standing with them against exploitation.