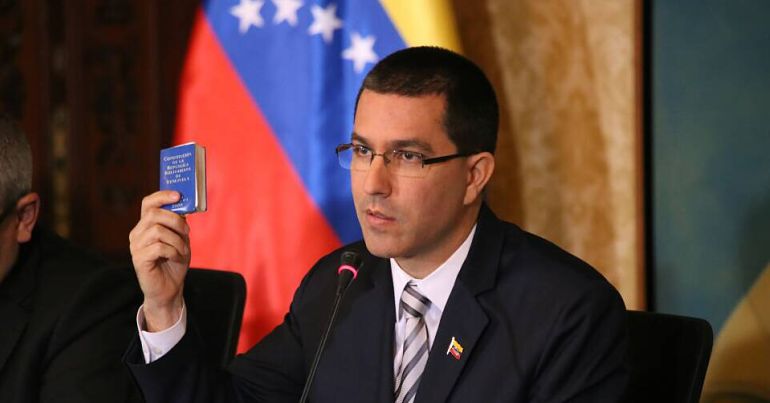 On 13 May, The Canary exposed a secretive unit within the Foreign and Commonwealth Office (FCO) dedicated to the “reconstruction” of Venezuela. Files obtained under the Freedom of Information Act also detailed private discussions between Venezuelan opposition figures and UK officials, detailing proposals for the promotion of British business after a planned coup.

The day after the article was published, Venezuelan foreign minister Jorge Arreaza summoned the UK chargé d’affaires Duncan Hill to “present him with a formal protest and demand an explanation for the creation… of a Venezuela Reconstruction Unit”. He added that the UK government must “abandon Washington’s coup-mongering plans and any destabilizing initiative” in Venezuela.

The Canary spoke to Arreaza about the revelation of this unit, the impact of economic sanctions on his country, and the recent failed mercenary incursion into Venezuela.

What was your own, and the Venezuelan government’s, initial reaction to the existence of a ‘Venezuela Reconstruction Unit’ in the British Foreign Office?

“We had no idea that this unit existed – that it was created in the Foreign Office. So we were surprised. The first thing we did was to read your report with dedication, we examined the documents that you published.

“They were original, so we immediately convened the chargé d’affaires of the United Kingdom because the UK ambassador is in Peru at the moment. And we protested officially because we cannot understand why they created this unit in order to ‘reconstruct’ Venezuela, which is not destroyed”.

After sitting down with UK chargé d’affaires Duncan Hill, you wrote that he confirmed the existence of this unit and tried to “justify the unjustifiable”. Why were you dissatisfied with the UK government’s response? What do you find unjustifiable?

“The existence of this kind of unit – to reconstruct my country, which is not destroyed – and it being a secret unit has no sense at all. I appreciate that you found out about the unit and that you published it, because maybe we would have never found out about it.

“So I asked Duncan Hill, and he was very direct – very sincere. He said that the documents were original, that the unit existed, that six people work in the unit, that it’s led by the former ambassador to Venezuela John Saville.

“But I insisted that I don’t find any other sense [for the] existence of this unit [if it] is not to support [a coup]. Maybe they have information that we don’t have from the US that they are about to attack and destroy Venezuela, and then the British companies will want to rebuild Venezuela.

“But I was very frank, also. I was outraged, and I told him that it was unacceptable”.

In January 2019, the Foreign Office urged the Bank of England to freeze over $1bn of Venezuelan gold, adding to years of intensive US economic sanctions. Can you speak about the impact of economic sanctions on the Venezuelan economy, particularly in light of the present coronavirus pandemic? Are they hurting politicians or are they mostly hurting the civilian population?

“If they were hurting politicians, and the Chavista politicians we wouldn’t mind at all, because to begin with we don’t have assets or personal money in the US or in Europe or whatever.

“Not being able to use the banking system is the worst of the consequences of the sanctions. I cannot deposit money from Venezuela to my staff in the United Kingdom, or in Spain, or in Europe, or in Washington, to pay for the salaries for the embassies or consulates.

“And the same thing happens when we try to buy medicine or food, we cannot use our accounts and our money. Especially when you freeze and block the money like the UK government did with the Venezuelan gold. This gold belongs to the 30 million Venezuelans; it doesn’t belong to Nicolas Maduro or Jorge Arreaza. It belongs to the Central Bank of Venezuela, and it has to be used to satisfy Venezuelans’ needs. So it’s really theft – they have stolen the Venezuelan money and it’s unacceptable. And it is absolute subordination to the regime change policy of the United States and Mr Trump”.

The US and British governments have suggested on numerous occasions that Venezuela is a dictatorship. How do you think Venezuela’s credentials as a democracy sit against those of the US and Britain?

“Well, we don’t have a King or a Queen, and our president is elected by the people in fair elections… It is a democracy, we have not only three branches of government, but we have five branches of power, including the popular power which is organised as the people organising. Of course, this is a different system, a different kind of democracy – it’s direct democracy and not parliamentary democracy.

“The corporations and the military corporations and the big lobbies do not take decisions in Venezuela. They do not choose the president, they do not choose the lawmakers. So of course it’s different from the US where there are only two parties – it’s a plutocracy. You have to be a millionaire or billionaire to be president of the US. You have to have the support of the weapons companies and the pharmaceutical companies in order to be able to be a candidate of one of the only two parties.

“And then they have this unusual way of voting with electoral colleges – it’s not a direct vote for the people of the United States. So I believe we are a much more democratic country than the United States, and even many European states…

“The Trump administration and other administrations have always obeyed the Monroe doctrine which establishes that this part of the world belongs to the United States, and they have to control governments, armies, economies, et cetera.

“So because we have a different system, because we are going against the usual capitalist governments in this part of the world, we are of course an objective of the regime change policies, of the coups, of the invasions and all of this that we have suffered for almost twenty years”.

There was recently a failed incursion into Venezuela by US and Venezuelan mercenaries. The contract leaked to the Washington Post names Juan Guaidó as this plan’s ‘Commander in Chief’. What is the Venezuelan government’s response to this, and what does this say about some aspects of the Venezuelan opposition which are portrayed in the international media as peaceful and supporting of human rights?

“This began in 2002 with the coup against President [Hugo] Chavez. And the opposition of Venezuela has always chosen violent means and shortcuts in order to get to power. And this last operation was really dangerous – we’re talking about mercenaries from the United States. A war company, a mercenary company from the United States was contracted by Juan Guaidó and these people in order to invade Venezuela, in order to kill President Maduro, to kill the vice-president, to kill the president of the National Constituent Assembly, or at least to hijack them and take them in a plane to the United States because they are supposedly drug dealers or whatever.

“And this [mercenary] operation was financed by drug traffickers of Colombia, and it’s been demonstrated, we have enough proof and testimonies – even from the US soldiers that took part in this operation. So this statement of the United States when they say all of the options are on the table when it comes to Venezuela, that’s what they’re doing. And the drug dealing accusations against our president, against members of our government were [giving] the green light to these kinds of mercenary groups in order to do what they have to do to get their reward and make a civil war probably in Venezuela, and bloodshed”.

What do you think Venezuela would look like should the US and its allies succeed in overthrowing this government?