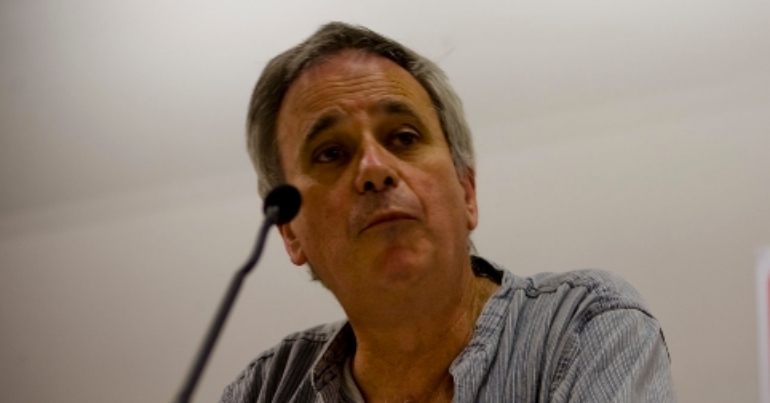 15 May was al-Nakba Day, an annual commemoration of the ethnic cleansing of the Palestinians in the late 1940s. On that symbolic day, The Canary spoke to historian Ilan Pappé in an exclusive interview. Professor Pappé is himself an Israeli Jew whose parents settled in Israel after fleeing persecution in Nazi-occupied Europe. However, he’s a staunch critic of both the events that led to Israel’s founding in 1948 and Israeli policy towards Palestinians since then.

Pappé shared his expertise about what happened during al-Nakba, how it has been distorted by Israeli propaganda, and how this ethnic cleansing has a lasting relevance to this very day. He also discussed his thoughts about the recent escalation of violence in Gaza and Jerusalem, the latest Knesset elections, and the seemingly ever-rightward shift in Israeli public opinion. In addition, Pappé weighed in on the ongoing debate about a two-state vs one-state resolution to the Israel-Palestine conflict and responded to criticisms of the latter made by professor Norman Finkelstein, who The Canary interviewed in a two-part series in 2019.

He also spoke of how he believes the central problem in Palestine is the legacy of settler colonialism. For him, the only way to overcome this legacy is to recognize that there already is one state and that there needs to be full recognition of rights for all Palestinians whether they live in the occupied territories, in Israel proper, or anywhere else.

The Canary first asked Pappé to summarize what happened in al-Nakba. He said:

In the process of this ethnic cleansing the Zionists, and later the Israeli forces, expel half of Palestine’s population

Pappé then spoke about how the Israeli government and wider Zionist movement have deliberately attempted to misrepresent al-Nakba for their own political purposes:

Zionism as a whole is a project of propaganda. … The narrative I grew [up] on as an Israeli Jew was that actually in 1947 the United Nations offered the very generous and reasonable idea of dividing Palestine into two states. The Palestinians and the Arabs rejected it. The Arab world declared war on Israel and asked the Palestinians to leave so as to make way for the invading Arab armies. The Israelis tried to convince the Palestinians to stay but they wanted to leave. And that’s why the refugee problem was created. And miraculously Israel succeeded in fending off the attack from the Arab world.

Pappé pointed out that this narrative is incorrect first of all because the Zionist forces, though numerically smaller compared to the wider Arab world, were actually the more powerful militarily. And in any case, the Zionist leadership had already entered into a secret agreement with Jordan, the most powerful Arab military force at the time, that “totally neutralized the only Arab army that might have saved the Palestinians”.

Moreover, Pappé mentioned that the idea that the Zionist leadership wanted the Palestinians to stay is blatantly false:

Of course, you find out [from the historical record] the proof, which is undeniable proof, for the planning of the ethnic cleansing. And there’s no evidence whatsoever of any attempt to convince the Palestinians to stay. On the contrary, there’s plenty of evidence for the massive expulsion and the prevention of Palestinians from returning.

Pappé pointed out that this is still the mainstream Israeli version that is repeated on Israel’s foreign ministry’s website, and throughout the country’s media and education system.

The latest escalation of violence in Palestine

Speaking about the current escalation of violence, he said:

The immediate background is a serious provocation instigated by the Israeli prime minster Benjamin Netanyahu the moment he realized he’s not going to be able to form a government, and therefore might find himself on the way to court… if not to the jailhouse. And in a very calculated, cynical way he started a provocative action

knew that the Hamas would react symbolically, and he used that pretext to retaliate with all the force of the Israeli army and used also settlers, fanatic settlers in the occupied territories, as a movement to steer a kind of a civil war

He also mentioned the historical context, pointing specifically to the blockade and siege of Gaza, the ongoing ethnic cleansing of Area C in the West Bank, the apartheid situation in the occupied territories, and the continuing suffering of Palestinian refugees.

Reflecting on the latest Israeli elections

Pappé then spoke about the fallout of the most recent Israeli election and Netanyahu’s attempts to form a government. He agreed that the Israeli voting public seems to be moving further and further to the right:

There are only two viable political options among the Jewish electorate of Israel – one is center-right and one is extreme right. There is no left. There is no liberal Zionist voice. There is no liberal Zionist force to reckon with. And these are the two options… the Israeli electorate in large numbers does not believe… that you can be both an ethnic state and a democratic state… So between the options of being democratic and being racist, they prefer the latter option.

For Pappé, this renders the idea of any kind of change from within Israel a complete non-starter. As a result, “the conclusion from that is that the only way of changing things is very strong pressure on Israel from the outside.”

The two vs. one-state solution

Speaking on the one-state solution, Pappé was unequivocal in his support:

There is no chance in the world for a two-state solution. … There is already a one-state solution, it’s called ‘The Apartheid Republic of Israel’ [and] it controls every parts of historical Palestine [by] different means… Our task, the task of the Palestinian liberation movement is now to ask: ‘How can we make this apartheid state more democratic, more free, more liberated?’

I don’t think that the Palestinians are only the people who live in the West Bank and the Gaza strip. … And I think Palestine is the country from the River in the Jordan [to the Mediterranean sea] and every part of it has to be liberated and every Palestinian needs to be liberated and be free. A two-state solution does not offer it. In fact, it offers a perpetuation of the colonization [by] other means.

He rejected arguments about international law and the international consensus serving as the baseline for how to resolve the conflict:

Palestine is an area of colonialism, it’s not an area where two states are fighting each other… [and so international law] is totally irrelevant to what is going on in Palestine. It’s a continued settler-colonial project that has to be decolonized.

The future lies with the youth

He concluded by saying that the greatest hope for the future lies with the younger generations of Palestinians:

What I am in inspired by is the younger generation… And I think they are brewing new ideas of both the endgame, if you want, but also how to get there. …

These new ideas, I’m hopeful that they will mature into not just soundbites or slogans but into a more practical program.