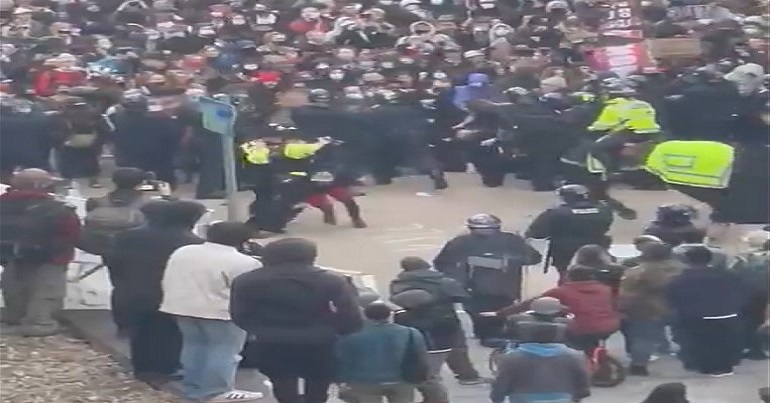 Mariella Gedge-Rogers is facing prison after she was convicted of riot by Bristol Crown Court last month. The charge carries a maximum sentence of ten years and she’s due to be sentenced next week.

Mariella – a 27-year-old aerial performer – was arrested after a confrontation between police officers and Kill the Bill protesters on 21 March last year outside Bristol’s Bridewell police station. She said she handed herself into the police station voluntarily after a wanted picture of her had been circulated. She then pleaded not guilty to riot in court.

For the first time since her court case, she has spoken out publicly about the violence that she faced from officers.

Mariella told The Canary that she attended the Kill the Bill protest on 21 March to protect “the right to peaceful protest and freedom of expression”. However, she told us that “the energy changed” when the demonstration arrived at Bridewell Police station. She said:

I was kneed to the floor by police and dragged around the floor by another officer whilst three officers held me down and one stood on my hand with their boot, my head was on the curb I was in the gutter whimpering (this can been seen and heard on body worn footage used in court).

A video of the incident – circulated on Twitter – has received almost 10k views. You can watch it here:

Today police in #Bristol continued where they left off in London last week – attacking people who are protesting police violence and the plans to give them new powers.

Mariella showed us this picture of the injuries to her hand taken a week after the protest: 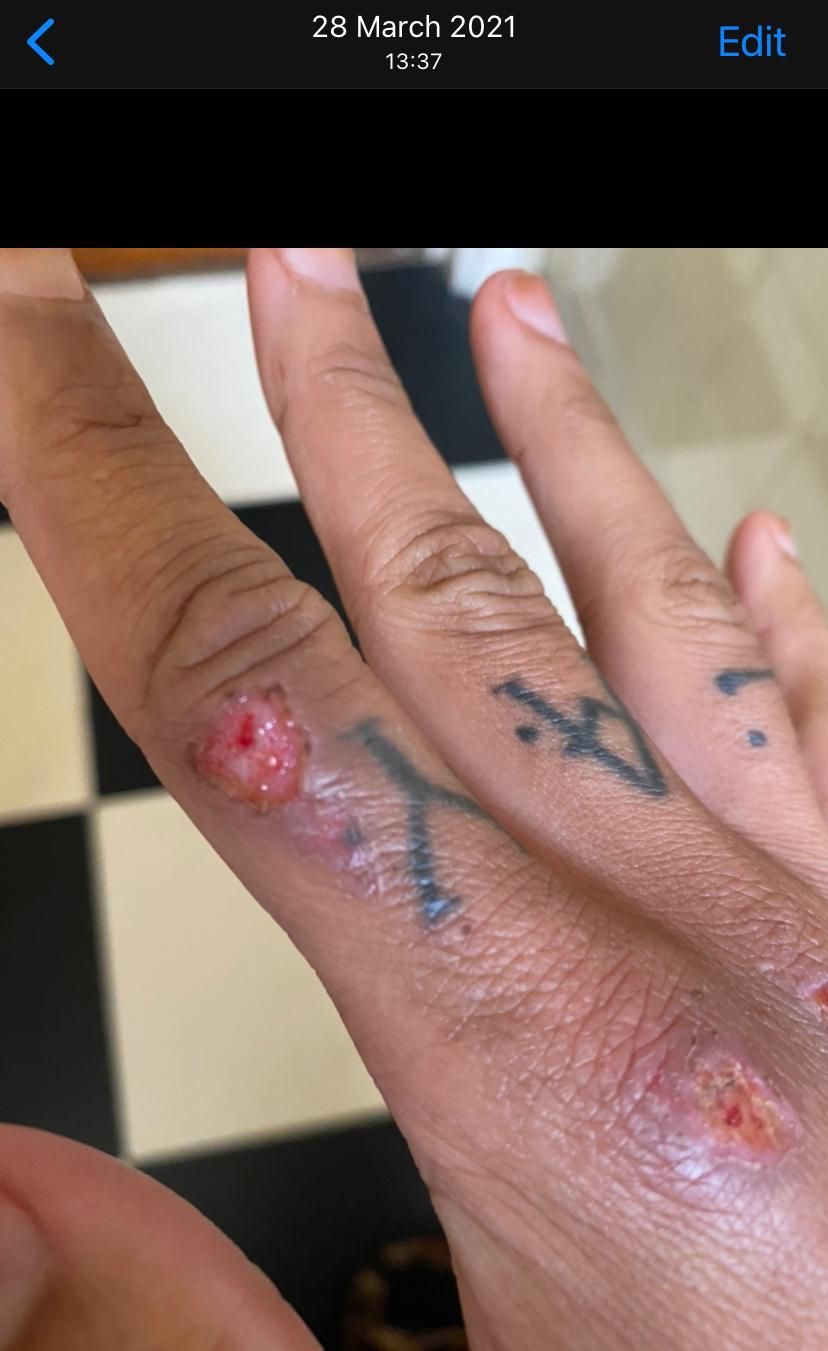 “Kneed to the floor”

Mariella has been found guilty of riot on the basis of videos taken later in the evening. The mainstream media has focused on an incident where Mariella hit an officer with her skateboard. Mariella told us that this incident happened after the incident when she was kneed to the floor by officers.

Mariella is a Woman of Colour. She said that being “kneed to the floor” was especially frightening in the light of the murder of George Floyd, who died of suffocation as a result of Minneapolis Police officer Derek Chauvin kneeling on his neck.

Mariella said she found the experience “frightening”, and that it affected the way she reacted later on.

As a woman of colour and after being kneed to the floor by police (considering the murders that had happened around this time of year at the hands of police) this experience was very frightening and affected my mental health and the way I reacted during the rest of my time at the protest.

At the time of the protest at Bridewell, two young People of Colour had died following being detained by police in Cardiff and Newport. As The Canary highlighted in its coverage of the protest:

In January, 24-year-old Mohamud Hassan died after being detained at Cardiff Bay police station, not so far away from Bridewell. Five weeks later, 29-year-old Mouayed Bashir also died in police custody, this time in Newport. Police violence is felt disproportionately by People of Colour in the UK. Non-white people are twice as likely to be shot dead by the police, and a Person of Colour is more than twice as likely to be killed in police custody.

What happened to Mariella is – unfortunately – nothing new. The Network for Police Monitoring (Netpol) accused the UK police of ‘institutional racism’ in the policing of the Black Lives Matter protests the previous year. Its report found:

Excessive use of force and disproportionate targeting of Black protesters, with baton charges, horse charges, pepper spray and violent arrests.

“I feared for my life”

I didn’t know if I would get back up. I feared for my life.

Mariella told us that the experience of being kneed to the ground made her act “out of character”:

I suffer with symptoms of PTSD from being mistreated by men in the past. [My actions] became out of character, I was upset about what was going on.

Mariella wanted to stress that she feels remorse that her later actions may have caused fear to police officers. She is seen on one officer’s body-worn footage saying “I know you’re a human being”.

Mariella described the backdrop to the March 21 Kill the Bill protest. She said:

Emotions were running very high at that time shortly after George Floyd’s murder by a serving police officer, the removal of the Colston [slave trader] statue from its plinth in Bristol, the kidnapping and murder of Sarah Everard and the aftermath at her vigil at Clapham Common.

The Bristol demonstration happened less than a week after footage of police brutalising women at a vigil for Sarah Everard had gone viral.

We asked Mariella how she had been affected by the events of 21 March. She told us that she felt “traumatised”, and that she:

was made to feel like scum by the prosecution, when I am a normal person of society who was attacked. I’m at risk of doing 10 years in prison for riot – the most drastic public order charge… [This charge is] being used to make an example out of young protesters.

This charge is massively impacting my mental health and general wellbeing. As a young mixed-race woman, I fear a prison sentence could get in the way of my plans to begin my career in Circus arts.

Mariella said that she thinks the sentence she is facing is “hugely disproportionate”, particularly considering the police violence she faced.

I believe the prison sentence I’m facing is hugely disproportionate, especially after being assaulted by three policemen and dragged on the floor in the midst of the violence that took place that day.

At least 62 protesters were injured by the police on 21 March. At least 22 of them sustained head injuries, and many of them were hospitalised. Avon and Somerset Police initially claimed their officers suffered broken bones and a punctured lung, but they later retracted this statement.

Geraint Davies MP is the chair of the All Party Parliamentary Group on Democracy and the Constitution which investigated the policing of the protests in Bristol and Clapham. He said that the police:

His words echoed Mariella’s, when he said that the riot charges may be:

seeking to punish people in an excessive and disproportionate way, not just for protesting but for challenging the police

Mariella is due to be sentenced next week at Bristol Crown Court. She will be the 14th person to be sentenced for the events of 21 March. The 13 people who have appeared in court so far have received more than 55 years in prison between them.

In February 2022, Jasmine York became the first person to be found not guilty of riot for the events of 21 March.

Whatever happens at her sentencing, people in Bristol know what really happened at Bridewell Police station, and have raised nearly £30k to support those facing prison.

Mariella is already planning to appeal her conviction. She concluded:

I’m hoping to be successful in appealing this charge or shortening this sentence in mitigation as I believe my imprisonment would not only disturb my home life but also cause pain to family and friends who need and care for me. I’d be more likely to have trouble getting back into a stable lifestyle after custodial. These impacts are far from having the desired effect.