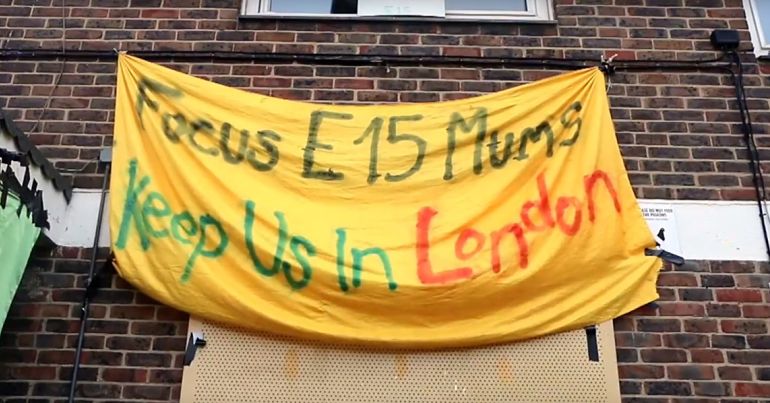 Sara is a mother of two living in the east London borough of Newham. Her children were brought up in the borough; the eldest child goes to school there; and all her family live close by. Plus, she’s working as a nursery nurse in a local school.

Yet she’s facing homelessness for refusing Newham Council’s offer of a property in Birmingham.

Changing of the guard

I meet Sara the day after she had a meeting with Newham’s new mayor Rokhsana Fiaz. Fiaz was elected in May 2018, ending the 16 year reign of the previous incumbent Robin Wales. Both are Labour politicians, but the campaign group Focus E15, which is fighting against social cleansing in the borough, described Wales as treating young mothers with “utter contempt and disdain”. In response to Focus E15’s campaign to keep young mothers in the borough, Wales famously stated:

Fiaz, in contrast, has said all the right things. Sara’s case is her first real test, and a chance to demonstrate the compassion that ­Wales failed to show.

Newham is a borough of contrasts. It hosted the London Olympics in 2012, receiving huge investment. Yet one in 25 people are homeless in the borough, the highest ratio in London. These contrasts are not lost on Sara, who says to me:

They tell you that Newham is the poorest… borough in London… look around you, look [at] the buildings… they’re trying to… implant something, [that] this is only for rich people.

Sara moved to the UK from Yemen in 2005 when she was 18. Her father was already living in the country and had applied for the rest of the family to join him. The family approached Westminster Council for assistance, who found them a housing association property in Newham.

Sara lived in the family home until 2017. However, by this point she had two sons and was sharing one bedroom with them and her 14-year-old brother. Not an ideal situation for a young family or a teenager. So friends advised Sara to go to Newham Council to apply as homeless due to overcrowding.

Her description of approaching the council building conjures a feeling of trying to get through border control rather than a place to assist those staring down the barrel of homelessness. The council treats prospective applicants with huge suspicion. Without a letter of appointment, security guards simply wont allow you in. Sara states this made her feel:

After going back and forth between Newham and Westminster councils, Newham eventually offered Sara temporary accommodation in Brimstone House on 1 June 2017. Sara describes Brimstone House as a building full of young mothers living in insecure, run-down flats, desperate to find some security.

Sara says that when she moved in, the council repeatedly told her that London was too expensive for her, and she should consider looking further afield. True to its word, in September 2017 the council called her into its offices and offered her another temporary property in Birmingham. These kind of offers are now commonplace in London. The housing charity Shelter states that local authorities in the capital are moving families out of their areas “as a matter of course”.

Sara immediately rejected the offer as it was too far from her support network, and would force her son to move schools. She was also planning to return to work in Newham. Her mother picks her older son up from school and looks after the younger one when she works.

The council told her to think on it, as if she refused a “suitable offer” of accommodation, it would issue an ‘intentionally homeless’ decision. This would mean the council had no more duty of care towards her and could cancel her current accommodation.

Understandably, Sara was rocked by this threat. She described how she was close to accepting the offer when a fellow mother advised her to go and talk to the Focus E15 campaigners.

Brimstone House, then called the Focus E15 hostel, was actually the birthplace of Focus E15’s campaigning. The group’s website describes how:

The Focus E15 campaign was born in September 2013 when a group of young mothers were served eviction notices by East Thames Housing Association after Newham Council cut its funding to the Focus E15 hostel for young homeless people. When they approached the Council for help, the mothers were advised that, due to cuts to housing benefit and the lack of affordable housing in London, they would have [to] accept private rented accommodation as far away as Manchester, Hastings and Birmingham if they wanted rehousing.

Since then, the campaign has been fighting against social cleansing in Newham, staging multiple occupations of empty council buildings and operating a weekly stall in Stratford.

Sara approached the stall and was immediately taken under the group’s wing. The campaigners explained to Sara how hundreds of council buildings sit empty in the borough. They also described the situation as “ethnic cleansing”.

Focus E15 estimates that over 400 council properties sit empty in Newham. Meanwhile, Newham Council refused to answer a 2017 freedom of information request enquiring how many properties lie vacant in the borough. It stated that the borough is currently undergoing “extensive regeneration” leading to “higher levels of empty properties”. And it said it couldn’t give details of the properties due to the risk of attracting squatters.

Sara describes how this was ‘enlightening’. She states that being aware of her rights strengthened her resolve to stay within her community. She agrees that the council had tried to “brainwash” her before but this newfound knowledge broke its hold.

She rejected the Birmingham offer. True to its word, the council issued an intentionally homeless decision. It attempted to cancel Sara’s accommodation at Brimstone House, but after a Focus E15 campaigner telephoned the council, it allowed Sara to stay. Sara is unsure what was said on this phone call, but thinks the threat of very bad publicity terrified the council.

Sara tried to appeal the council’s decision, but this was rejected, as she couldn’t provide sufficient information that she’s employed in the area. She has now submitted a second appeal, but it was late. She has a court date at 10am on 26 July to decide whether the late appeal can be accepted. Sara will have no official legal representation as the council has cancelled her rent account. This means that she’s not receiving housing benefit, and thus is ineligible for legal aid.

Fiaz told Sara she would look into this, but given the short amount of time, Sara is sceptical about what can be achieved.

When Sara talks about what she wants from the future, it isn’t a life of luxury. She simply states:

affordable accommodation in Newham… something that a part-time worker or a full-time worker who is… on a really low income can afford.

But the toxic mix of high rents and a dearth of social housing means this simple aspiration has become an impossibility for many low-income Londoners.

The actions of Newham Council provide a snapshot of the general local authority reaction to this problem. Rather than attempting to create more affordable housing for people like Sara, councils are peddling the line that it’s impossible for people to stay in the area.

London has become a city where the contents of your wallet trump everything else. Either pay up or be shipped out.

The Canary asked Newham Council for comment but received no response.

– Focus E15 says: “We urge all supporters of Focus E15 campaign and campaigners for housing justice to join us at court to support Sara on Thursday 26 July. 10am at The County Court, Central London, R.C.J More Building, Royal Court, Strand, London WC2A 2LL.”