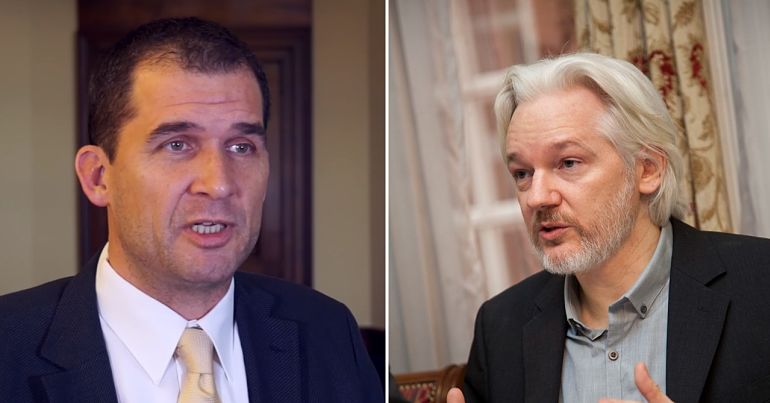 Prof Nils Melzer is the UN Special Rapporteur on Torture and Other Cruel, Inhuman or Degrading Treatment or Punishment. He agreed to assess WikiLeaks founder Julian Assange’s situation after Sondra Crosby, a Boston-based physician and professor, sent him a letter expressing serious concerns about his health in April 2019.

The UN torture expert visited Assange in Belmarsh high-security prison in early May, and concluded that he “showed all symptoms typical for prolonged exposure to psychological torture”. The report sent shockwaves across the world, confirming what many had long suspected about Assange’s legal battle: the process is the punishment.

Melzer has now spoken exclusively to The Canary about the persecution of Assange in the courts and in the media.

In a UN press statement, Melzer explained that:

Mr Assange has been deliberately exposed, for a period of several years, to progressively severe forms of cruel, inhuman or degrading treatment or punishment, the cumulative effects of which can only be described as psychological torture.

And speaking to The Canary, Melzer explained whom he holds chiefly responsible for this “psychological torture”, and where this treatment sits within international law:

The evidence made available to me strongly suggests that the primary responsibility for the sustained and concerted abuse inflicted on Mr Assange falls on the governments of the United Kingdom, Sweden, the United States and, more recently, also Ecuador. Accordingly, these governments would be responsible jointly for the foreseeable cumulative effect of their conduct, but also each of them separately for their respective contributions, whether through direct perpetration, instigation, consent, or acquiescence. Further, each of them has consistently failed to protect Mr Assange from serious abuse, insult and intimidation by media and other private actors within their jurisdiction.

Assange spent the past seven years holed up in the Ecuadorian embassy in London, in what the UN described as “arbitrary detention”. After the latest Ecuadorian government allowed UK police to enter the embassy and arrest Assange, an ostensibly neutral judge branded him a “narcissist”. He was later sentenced to a virtually unprecedented 50 weeks in prison on a bail-skipping offence before the US government indicted Assange on 17 new counts under the Espionage Act.

‘Making an example of Assange’

In an interview with RT‘s Going Underground, Melzer said:

To me it is inconceivable that so many layers of profoundly skewed and biased steps in the judicial proceedings against Julian Assange could be just a coincidence.

The Canary asked whether, if not a coincidence, the “psychological torture” of Assange is punishment for his journalistic record and designed as a warning to future publishers. Melzer said:

The consistent and repeated failure of all involved states to protect Mr Assange’s fundamental right to fair judicial proceedings and due process makes the hypothesis of mere coincidence extremely unrealistic and gives a strong impression of bias and arbitrary manipulation. This starts with the secretive grand jury indictment in the United States, continues with the abusive manner in which Swedish prosecutors disseminated, re-cycled and perpetuated their ‘preliminary investigation’ into alleged sexual offences, exacerbates with the termination by Ecuador of Mr Assange’s asylum status and citizenship without any form of due process, and culminates in overt bias against Mr Assange being shown by British judges since his arrest.

The only realistic explanation for this sustained systemic failure of the judiciary is that the United States, and probably also the other involved states, are trying to make an example of Mr Assange before the eyes of the world, not as much as a punishment for whatever real or perceived harm he is alleged to have caused, but as a measure of deterrence for others who might be tempted to imitate Wikileaks and Mr Assange in the future. In these circumstances, Mr Assange has absolutely no chance to get a fair judicial proceeding in any of these jurisdictions.

This is wrong. Assange chose to hide in the embassy and was always free to leave and face justice. The UN Special Rapporteur should allow British courts to make their judgements without his interference or inflammatory accusations.

It was the third time that the UK government had reacted to international bodies with contempt in the same amount of weeks. Hunt, moreover, recently claimed he would not “stand in the way” of Assange’s extradition.

Melzer responded to Hunt by saying:

With all due respect, Sir: Mr Assange was about as „free to leave“ as a someone sitting on a rubber boat in a shark pool. As detailed in my formal letter to you, so far, UK courts have not shown the impartiality and objectivity required by the rule of law. [emphasis added]

In this light, The Canary asked if the UK government had effectively hijacked the legal process and was, therefore, sliding towards authoritarianism. Melzer continued:

I do not want to speculate in this direction, but what we can observe is that, so far, all three branches of state power – government, parliament and judiciary – have failed to show the impartiality and objectivity towards Mr Assange that is required under the rule of law. It is extremely worrying to see this type of collective prejudice in a mature democracy. If the UK fails to investigate and reprimand obviously inappropriate statements, reported conflicts of interest, and other potential sources of bias on the part of judicial magistrates, there is a real risk that his extradition hearings will amount to nothing more than a ‘fig leaf’ for his already pre-judged refoulement [the forced transferral of refugees to a country that’s likely to persecute them] to the United States.

Though wide parts of the corporate media co-operated with WikiLeaks to break headline stories over past years (and later picked up the awards for them, too), many prominent journals and journalists now fiercely condemn Assange. The Guardian, for instance, has run what can only be described as a smear campaign against Assange after it profited massively from WikiLeaks revelations. In an atmosphere of such media hostility, learning the truth about Assange can be an uphill battle.

Melzer previously explained to Democracy Now! that he too:

had been affected by the prejudice that I had absorbed through… public… narratives spread in the media over the years. And only when I scratched the surface a little bit, I saw how little foundation there was to back this up and how much fabrication and manipulation there is in this case.

The Canary asked Melzer about the media’s role in the persecution of Assange, and how dangerous it is to the functioning of democracy that one has to actively try to ‘scratch the surface’ to find the truth. He said:

In today’s information age, the media have an extraordinary power to shape public opinion, and no one is exempt from their influence. The media are a veritable ‘fourth power’ in the state next to the traditional branches of government, controlling not only what is said and shown, but also what is not disseminated and, therefore, is withheld from the public. This enormous power comes with an equally enormous ethical responsibility. Many media outlets and individual journalists have shown a remarkable lack of critical independence and have contributed significantly to spreading abusive and deliberately distorted narratives about Mr Assange.

When the media find it more appropriate to spread humiliating jokes about Mr Assange’s cat, his skateboard and his faeces, than to challenge governments consistently refusing to hold their officials accountable for wars of aggression, corruption and serious international crimes, they demonstrate a deplorable lack of responsibility, decency and respect not only towards Mr Assange, but also towards their own readers, hearers and viewers, whom they are supposed to inform and empower. It is a bit like being served poisoned junk food at a restaurant – a betrayal of trust with potentially serious consequences.

Although Assange was under constant surveillance during his final year in the Ecuadorian embassy, nobody has produced evidence that he smeared faeces on the embassy’s walls. That, of course, didn’t stop numerous publications running the story. Quite significantly, the allegation was first aired on the BBC – which also conducted an exclusive interview with Melzer but decided not to air it on television. A separate interview, however, was shared on BBC radio, which has a considerably smaller impact.

The collective persecution of Julian Assange must end here and now!

The Canary asked how we, as ordinary citizens, can force our governments to end this “collective persecution”. Melzer answered:

The process of influencing public policy in a democratic system requires a high degree of motivation and individual responsibility for the information we absorb and the opinions we form. Lethargy, complacency and indifference are much more comfortable but can come with a high price-tag down the line.

First of all, we have to realize that we have all been deliberately misled about Mr Assange. The predominant image of the shady ‘hacker’, ‘sex offender’ and selfish ‘narcissist’ has been carefully constructed, disseminated and recycled in order to divert attention from the extremely powerful truths he exposed, including serious crimes and corruption on the part of multiple governments and corporations.

In addition to US charges related to WikiLeaks revelations, of course, Assange faces a rape allegation in Sweden. Swedish authorities reopened this investigation at the request of the accuser’s lawyer. Notably, though, Assange’s residence in the Ecuadorian embassy was for political asylum; indeed, no government would provide asylum to somebody seeking to escape rape allegations. The Canary believes that no allegations of sexual assault or rape should ever become politicised by either side.

By making Mr Assange ‘unlikeable’ and ridiculous in public opinion, an environment was created in which no one would feel empathy with him, very similar to the historic witch-hunts, or to modern situations of mobbing at the workplace or in school. [emphasis added] Once totally isolated, it would be easy to violate Mr Assange’s most fundamental rights without provoking public outrage. If the involved states get away with persecuting Mr Assange without ever prosecuting the crimes exposed by him, they will have established a dangerous precedent of impunity threatening freedom of press and opinion worldwide, and they will also have seriously undermined the accountability of government officials for crime and corruption under the rule of law. So there is much at stake here for every single one of us, and everyone should use the democratic means at their disposal to inform themselves, make their voice heard and hold their government accountable.

Contrary to the BBC‘s editorial decision, Melzer’s voice should be amplified across the media landscape. As a distinguished professor of law, human rights chair at the Geneva Academy, and former Red Cross delegate, we ignore Melzer’s words at our own peril.