Amid increasing hostility, a new film exposes US regime-change efforts in Nicaragua - Canary 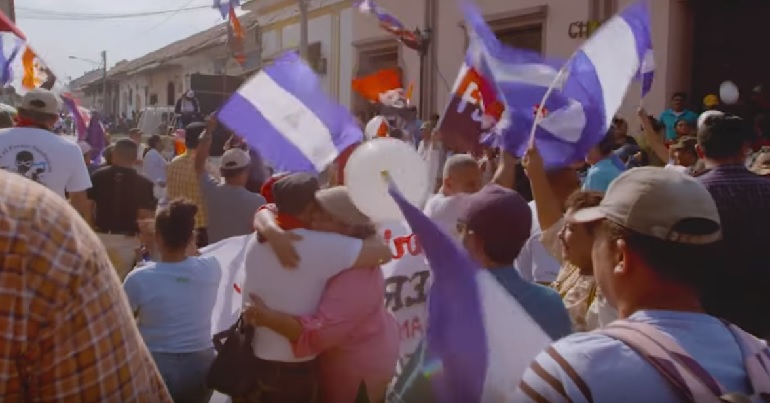 Washington has been putting increasing pressure on the Nicaraguan government recently, with one resolution pushing for further sanctions. Amid this hostility, an illuminating new documentary challenges the mainstream media’s distorted and overwhelmingly negative coverage of Nicaragua, a small Latin American country with a big history of resisting US imperialism and fighting for independence.

Nicaragua has been subjected to relentless interference and attacks from the US over many decades as successive administrations have sought to crush the Sandinista revolution which overthrew the US-backed dictator Somoza in 1979. The Sandinistas were ousted in 1990 after a decade of US aggression and have since returned to government with the election of Daniel Ortega as president in 2006.

The film – Nicaragua: The April Crisis & Beyond – mainly focuses on the latest (and so far unsuccessful) attempt by the US to overthrow the Sandinistas. Over the course of several months in 2018, Nicaragua was plunged into turmoil as US-funded right-wing opposition groups carried out violence and waged a concerted campaign of destabilisation. Ultimately, the US and its right-wing allies in Nicaragua failed to achieve their goal of overthrowing the country’s democratically elected government.

The attempted coup, however, destabilised the country, bringing chaos and turmoil which has inflicted severe damage to the economy. Before this, Nicaragua had maintained strong growth rates of 4.6% of GDP (Gross Domestic Product) in 2016 and 4.7% of GDP in 2017. But following the political upheavals of 2018, the economy has contracted. In 2018, GDP growth was negative at -3.8%. Nicaragua’s economic difficulties have been compounded by US-imposed sanctions, including the NICA Act, signed into law by Donald Trump in December 2018. According to the latest World Bank forecasts, Nicaragua’s economy was projected to contract by 5% in 2019.

The mainstream Western media has consistently spread a biased narrative that depicts the Sandinista government as the real villain in the events in 2018, painting Ortega as a ‘dictator’ despite his clear democratic mandate.

American human rights and labour lawyer Daniel Kovalik wanted to push back against this narrative. So he set about making a film to tell the truth of what is really happening in Nicaragua. The peace activist explains that he made Nicaragua: The April Crisis and Beyond in order to get across a very clear message against US intervention in Nicaragua:

The main message I’m trying to get across in the film is that the events of the summer of 2018 were greatly distorted by the mainstream press. It is very clear to me and to most Nicaraguans that the crisis was not brought about by alleged police brutality but in fact brought about by a very concerted, very manipulative, very violent, right-wing campaign against not only the government but the Sandinista movement itself and this orchestrated campaign was funded by the United States.

US funds right-wing opposition in Nicaragua and beyond

The film uncovers the despicable role that the US continues to play in funding Nicaragua’s right-wing opposition. Throughout Latin America, the US has ploughed millions of dollars into funding right-wing political groups that coordinate closely with Washington. They are used as proxies to push forward the longstanding US goal of making the Latin America its ‘backyard’ again by removing all left-leaning governments from the continent.

As Kovalik points out:

The US has poured millions of dollars into Nicaragua, mostly in the form of supporting opposition groups. Actually, since the Sandinistas were re-elected in 2006, the US has cut humanitarian aid but has increased aid to opposition forces with the goal of destabilising the country. They have done this through the USAID, the National Endowment for Democracy (NED). The NED in a magazine actually bragged about the fact that their money brought to fruition this violent turmoil in 2018. So they aren’t even hiding.

The overlooked achievements of the Sandinista revolution

The documentary also carries an inspiring message of steadfastness and resistance. It contains a series of interviews with ordinary Nicaraguans who share their experiences of 40 years of intense political and social struggles for self-determination, the elimination of poverty, and the creation of a society that provides a decent standard of living for all.

Kovalik says he wanted the film to “give voice to everyday Nicaraguans” and provide an opportunity for them to discuss “what the Sandinista revolution has done for them”.

The achievements of the Sandinista revolution are largely ignored by the mainstream Western media. Reflecting on these achievements, Kovalik states that, after 13 years of Ortega’s government:

Now the country is nearly 100% electrified [up from 85% in 2007], has free Wifi throughout the country, poverty has been greatly eradicated. The Sandinistas have given the people free healthcare, free education, the country is now ranked 5th in the world in gender equality. These are incredible achievements for any country but for a country as poor as Nicaragua, as small as Nicaragua, and for a country that has been under this unrelenting intervention and warfare by the US since 1979, that they have achieved these things is frankly nothing less than miraculous.

US regime-change agenda against Nicaragua continues

The US administration recently achieved a big victory in Latin America when its allies overthrew Bolivia’s left-wing president Evo Morales in a military coup in November 2019. The US is now turning up the pressure on other countries in Latin America with independent governments, and Nicaragua is at the top of the list alongside Venezuela and Cuba. The Trump administration previously described these governments as a “troika of tyranny”.

In the face of such aggression and the prospect of increased US intervention in the near future, Nicaragua needs international solidarity. Tearing down Washington’s wall of lies (which seeks to justify its aggression against Nicaragua) is an important task for progressives across the world. And Kovalik’s new film is a powerful contribution to getting the truth out. It deserves to be widely seen.