Communities march on Irish parliament to say no to mining - Canary 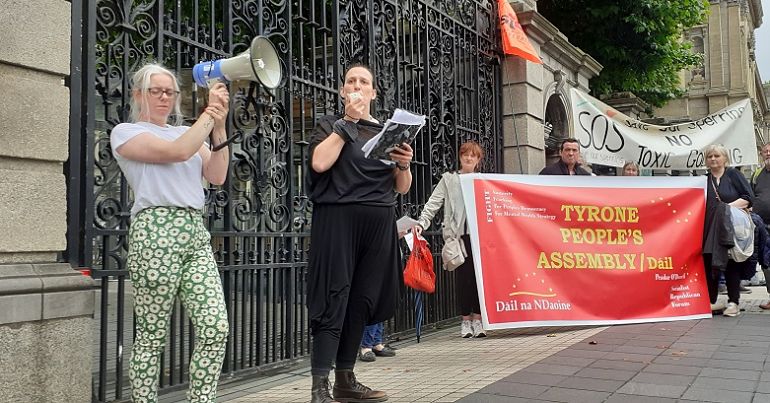 Campaigners told The Canary that mining affects everybody on the whole island of Ireland as minerals don’t recognise the border.  And they brought one simple message with them:

no to gold mining

As extensively reported by The Canary, Canadian mining company Dalradian Gold Ltd has been prospecting for gold in the Sperrin Mountains of County Tyrone since 2009. In 2017, it submitted a planning application to mine. It claims the mine will be “100% carbon neutral from day one”. But that claim excludes its work up until 2019. This, along with other other environmental claims, has been rubbished by campaigners and Friends of the Earth Northern Ireland.

An investigation by The Canary found a number of Dalradian’s environmental claims to be wanting. So the people who marched on Dáil Éireann say they’ll fight this mine proposal “until the end”.

Communities together as one voice

While this protest focused on the proposed goldmine in County Tyrone, there were also people there from anti-mining campaigns in the west of Ireland and different parts of Ulster (the most northern province in Ireland).

As previously reported by The Canary, there are a number of mineral prospecting licences, applications, and mining licences currently active in the north of Ireland. There are also large concentrations of gold south of the border.

People living in these communities are concerned about the environment and their health. They made their opposition to mining clear: 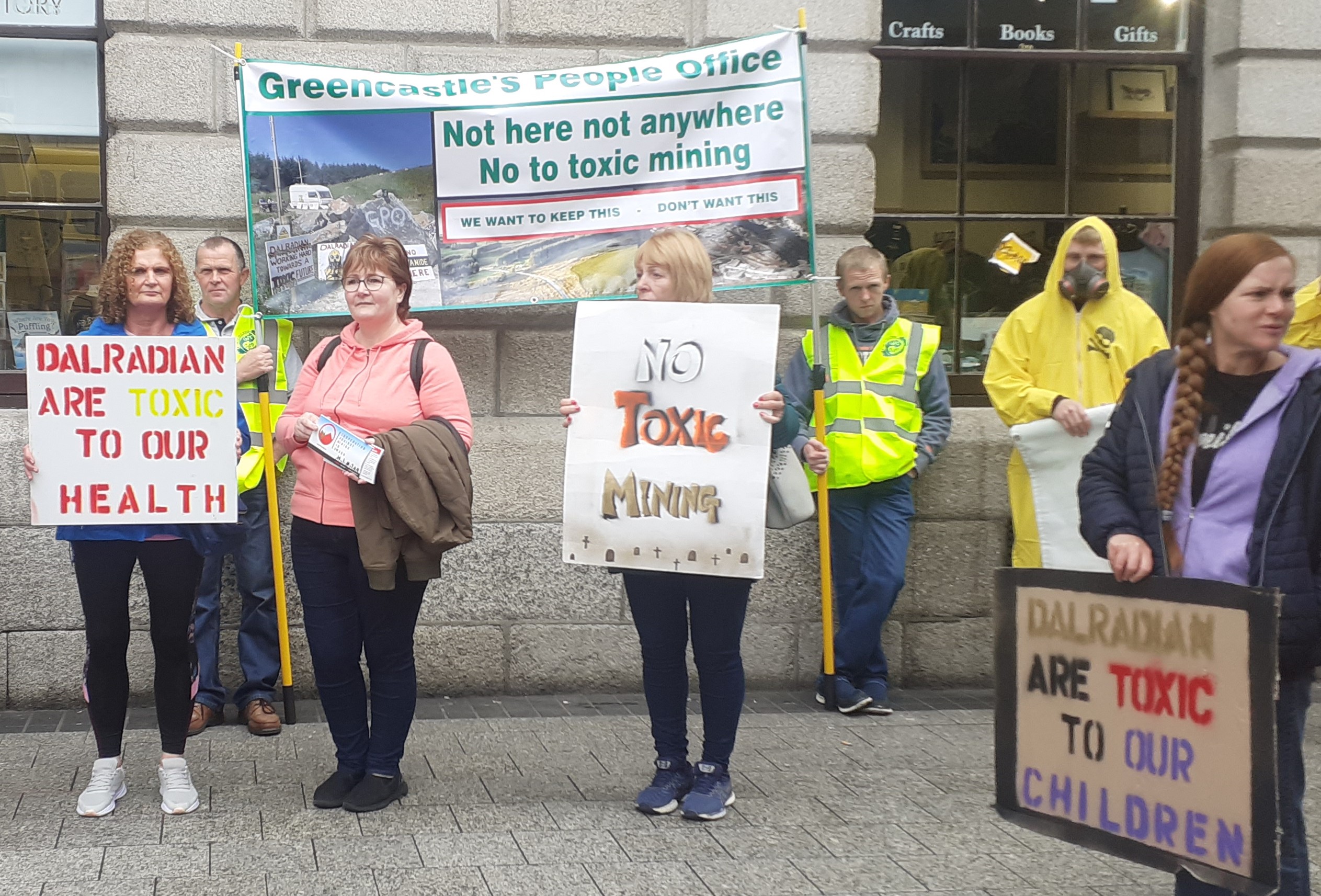 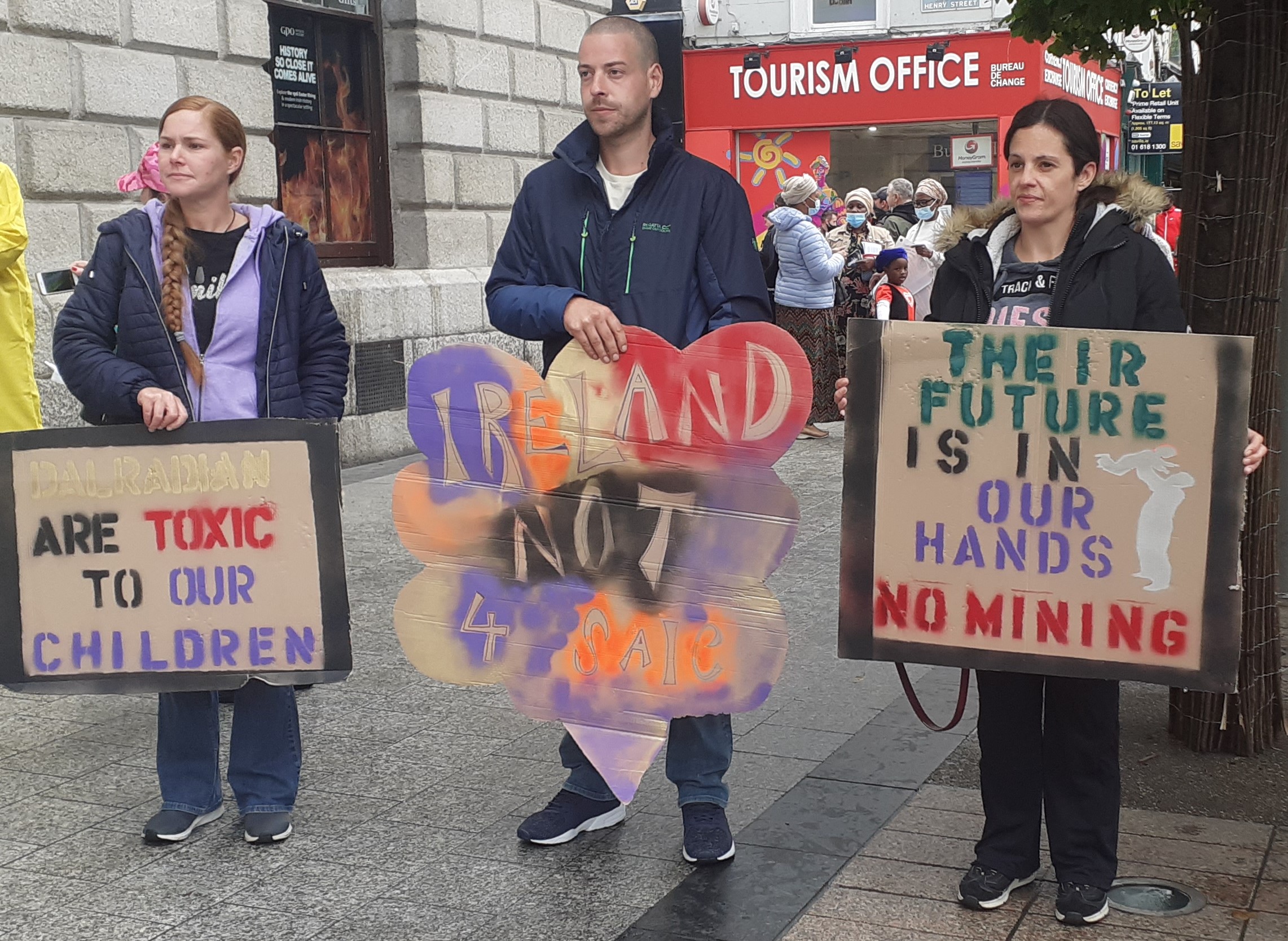 It’s about health and the environment

Local campaigner Fidelma O’Kane told The Canary the protest was to:

We don’t want mining because it will poison our water, our air, our land, and our health. We are doing this for future generations.

Patricia Campbell from the Tyrone People’s Assembly said she was there as she couldn’t:

believe that they (Dalradian) have the brass neck, at this time when climate change is so much on the agenda, that they would even think about coming in to dig up the Sperrins… so why would they do it?

We will be here until the end and hopefully get international support as well.

Get involved to stop the domino effect

Today is following on from Stormont. We’re taking it around the country and we’ll have to start planning to go to London.

Everybody’s doing what they can to get this word out. Because unfortunately the main media outlets just don’t seem interested in it, they’re not covering it at all.

And Dennehy encouraged members of the public to get involved as:

People think it won’t make a difference, it does make a difference… show that you’re against this… sharing a post on Facebook, let more people know… putting up a link towards an objection letter. Whatever you do it helps and write to your politician wherever you are. 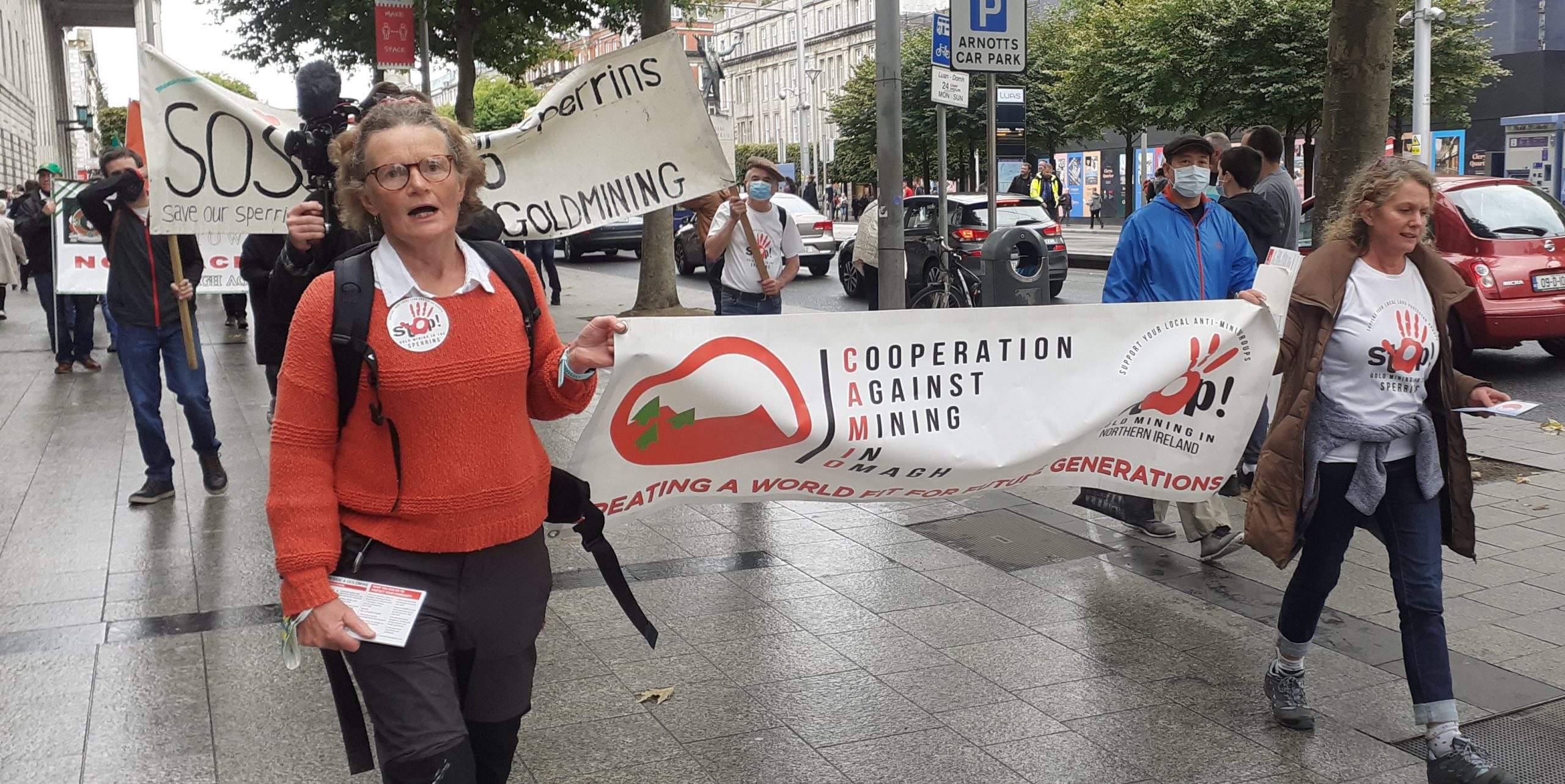 Marella Fyffe from Cooperate Against Mining In Omagh (CAMIO) said she:

lived beside probably the biggest mine in Australia, about 25-30 years called Mount Isa.

So she said she is:

hugely aware of the consequences of mining on a community both from the geographic from the biological… so when I heard this I said ‘no, this isn’t going to happen.’

Gordon Dunn, also from CAMIO, said the protest was about:

raising awareness to the gold mining proposals in the north west mainly the Greencastle area… showing people that there is a real and imminent threat to the local environment, should this mining proposal go ahead. Now if the Dalradian proposal does go ahead, it’s going to be the first domino in potentially a series of mines through the region.

The dangers of this mine going ahead

People and groups from outside the Sperrins also joined the protest. Damian Gallagher from People Before Profit (PBP) said PBP:

are long-standing opponents to extractive capitalism… we stand in complete opposition to them [mining projects in Ireland] and we support all the activists and all the campaigners.

The message over the last five, six, seven, eight years has become quite clear that the establishment parties up at Stormont [parliament in the north of Ireland], the establishment parties in the Dáil are not to be trusted when it comes to protecting the environment. They’re more interested in the interests of the business community than the people that they are elected to represent.

Stephen Beggs from Extinction Rebellion Northern Ireland came from Belfast to join the protest. Beggs said he and his XR colleagues had come to Dublin to join their “fellow Irish rebels from XR Ireland” and to stand:

Linda Sullivan from Friends of the Earth Northern Ireland said:

Dalradian, their project, is seen as opening the doors for a whole host of mining projects across the island. The island of Ireland is targeted as a hot spot for mining going forward. 25% of the north and 27% of the south is already concessioned [identified as a potential mineral mining area] and that could rise to 70%.

Apart from the fact that this would be a very destructive and damaging and polluting mine, that would destroy communities and the Sperrins, it would also set the scene for total extractivism gone mad. 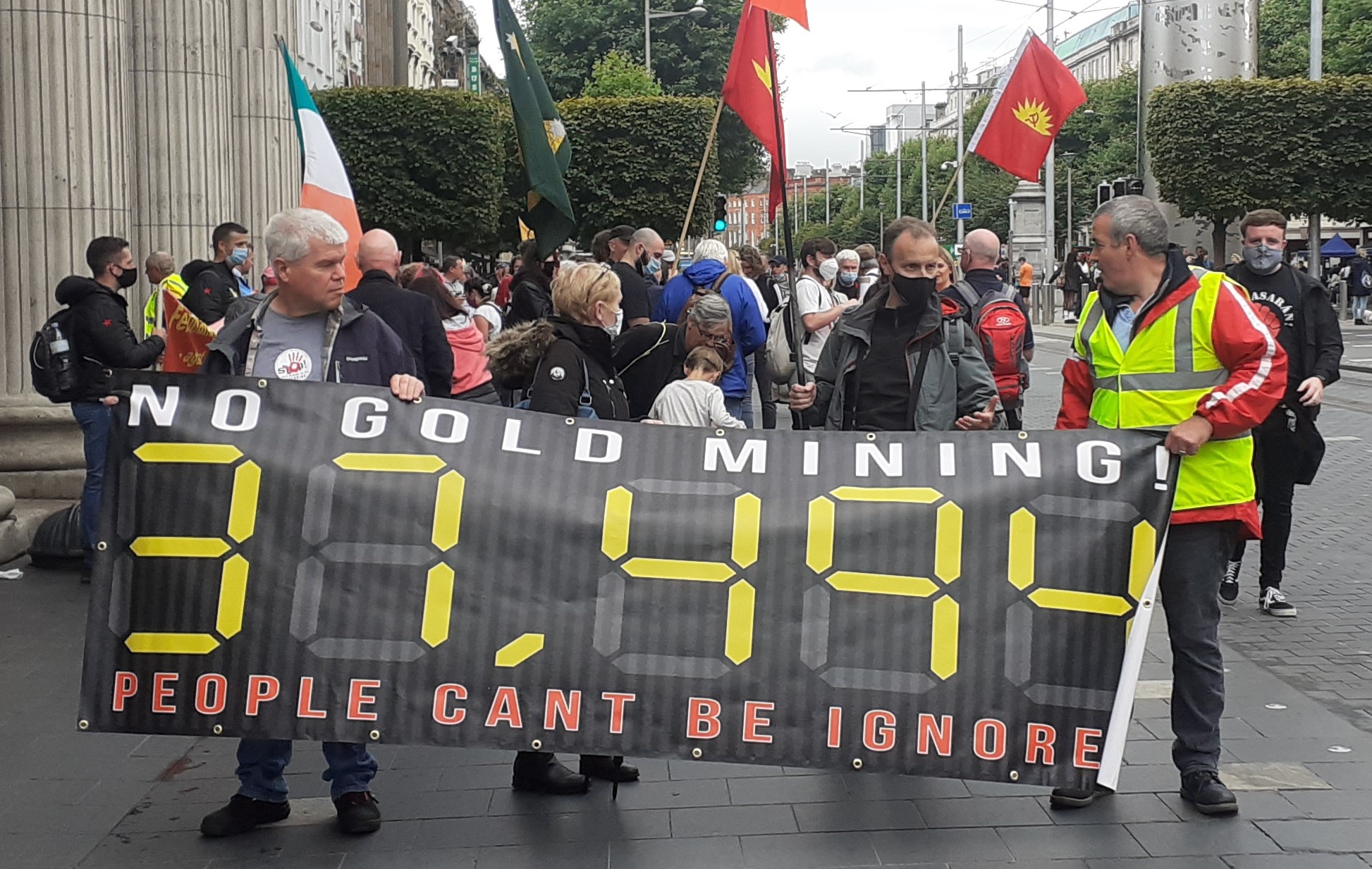 The objections are rising

Some campaigners marched behind a banner saying:

Dennehy told The Canary he was struck by how powerful it was to “put people on the streets”. He said the “reception was amazing” as lots of onlookers took interest in the protest. He gave one example of a German tourist, familiar with the Sperrins, who took their details and promised to “do whatever she can when she gets back home”.

So, as mainstream media ignores the people of the Sperrins, independent media continues to amplify their voice. As does the general public.